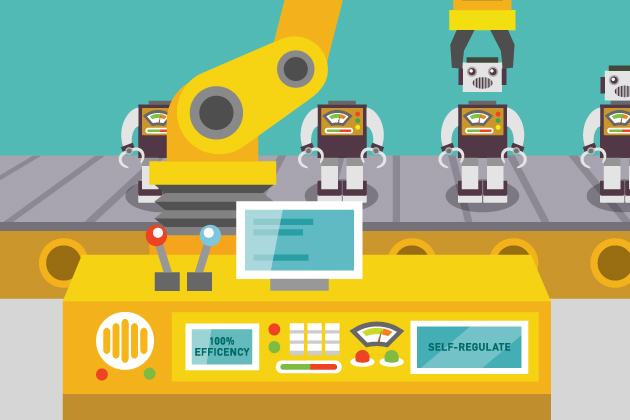 Smart manufacturing is the latest in a string of “smart” developments, such as smart buildings, smart cars and smart phones. In this case, the smart part derives from the sensors, data analytics and instrumentation software embedded in manufacturing equipment to manage machines’ performance.

Such intelligent systems offer valuable insight into asset utilization and can be -configured to predict maintenance needs. They can be integrated with other enterprise systems to more tightly align manufacturing with customer demand. Supply chains can be linked to the machines to reduce inventory and improve just-in-time manufacturing metrics. Above all, smarter machines can do what workers do more efficiently, accurately and for a lot less money.

In effect, the machines are programmed to react instantly to information provided by internal sensors and software analytics, which is transmitted back and forth through the cloud to other company systems. Obviously, this interconnected factory is a far cry from your grandfather’s machine shop, and it explains why smart manufacturing often is referred to as the new industrial revolution.

This revolution represents a paradigm shift in how things are made. By pulling people off the factory floor and leaving manufacturing decisions to the machines themselves, greater efficiency, productivity and other financial benefits are possible. In a December 2013 survey by the American Society for Quality, 82% of manufacturers that had invested in smarter machines said they gained greater efficiency, while 49% saw fewer product defects and 45% noted increased customer satisfaction.

Any time there is a paradigm shift in business, the landscape of risk shifts with it. Such is the case with smart manufacturing. On the whole, the migration toward smarter machines reduces overall strategic, operational and financial risk, proponents say. With fewer workers actively involved in making products, for instance, there are fewer workers to be injured.

But with these potential benefits come possible drawbacks. One concern is the mass exodus of baby boomers from the workplace in the next decade. As they walk out the door, the generations behind them—many of whom have become dependent on an already highly computer-driven manufacturing environment—may lack the know-how to understand why a machine suddenly ground to a halt or why the entire assembly line just shut down. If they cannot understand the components or determine the reasons for failure, how can they fix the problem?

Another perplexing dilemma when a problem surfaces is determining who will solve it—smart machines or smart people. Should a human being override the machine and determine a response, or should the intelligent machine solve its own problem? This question is important in situations where a dangerous outcome is -possible, such as an accident involving hazardous emissions or a potential injury-causing accident.

This revolution represents a paradigm shift in how things are made. By pulling people off the factory floor and leaving manufacturing decisions to the machines themselves, great efficiency, productivity and other financial benefits are possible.

According to the American Society for Quality report, 13% of manufacturers have invested in smart manufacturing to date. The critical task for risk managers whose companies are beginning this shift is to address the potential risks now in their enterprise risk management strategies.

No one disputes that the migration to smart manufacturing could be the best thing to happen to manufacturing since the development of the assembly line. “As we learn more about how to convert the data we accumulate into information, and then take that information and process it into knowledge, it creates greater value for the enterprise,” said Jim Porter, former chief engineer at DuPont and current president of operations consultancy Sustainable Operations Solutions. “Big data provides invaluable knowledge how to utilize manufacturing assets in ways that are more efficient, effective, safe and environmentally sound.”

As an example, Porter cited the intelligence produced by smart machines that help manufacturing operations reduce waste. The machines are embedded with software that directs more precise cutting, molding and assembly, among other manufacturing processes. Sensors detect subtle differences in water temperature, oil pressure, vibration and even microscopic metal fragments in the ambient environment, all of which are turned into information to reduce waste that might otherwise end up in landfills or polluting the air.

Less waste translates into financial value by reducing the volume of material supplies needed. And the data also helps a company increase its production yield as the machines are more efficient and more agile.

In addition, smart machines can reduce the risk of product failure. Consider an injection-molding machine that has been enhanced with sensors and data analytics. As the machine pumps plastic into a mold, air, water, oil pressures and temperatures can all be measured and changed to ensure that the appropriate volume of plastic is injected to eliminate the risk of cavities. “During the cycle of impressions, the system tells the machine to instantly change air pressure or water temperature,” explained Phil Shelley, former chief technology officer at Sears Holdings and current president of data analytics consulting firm Newton Park Partners. “By reducing product failure exposures, you optimize the yield.”

Smarter machines also can alert operators well in advance of necessary repairs. Using the same sensors, data analytics and instrumentation, operators can learn about problems, such as a gear that is grinding against metal, before the entire machine breaks down and the manufacturing process comes to a halt. “It’s always cheaper to repair something before it breaks than afterward,” said Bernardo Anger, general manager at GE Intelligent Platforms, a provider of smart manufacturing solutions.

Anger cited the example of a faulty compressor in a wind turbine. Subtle changes in vibrations or microscopic metallic fragments in the machine’s ambient environment may indicate a faulty compressor in need of imminent replacement. If the component is not replaced, the turbine could fail and endure a six-week shutdown to repair the damage. The disruption in business can be averted with a simple two-hour compressor replacement. Being able to better predict maintenance needs “dramatically changes the risk profile of many assets,” he said. “Since these assets are generally very expensive, breaking them can be very expensive.”

A smart machine also can step in to correct bad decisions made by human beings. “If the machine thinks the decision made by the operator will cause an accident or an emission, it can override that decision,” said John Bernaden, director of corporate affairs at Rockwell Automation. Bernaden is a member of the Smart Manufacturing Leadership Coalition (SMLC), which is comprised of major companies like Rockwell, General Motors and Owens Corning that are working to develop the world’s first smart manufacturing open technology platform.

Smart manufacturing also promises greater agility in responding to customer demands and is touted for improving working capital. With regard to the former, machines can be embedded with intelligence that is linked to customer orders in real time. The assembly line speeds up or slows down as demand dictates. This information can also be integrated with supply chain systems to align supplies with customer demand.

Another change is in workers compensation risk. Companies like Moosehead Breweries, which invested $35 million in smarter machinery at its bottling plant, have been able to significantly trim the workforce and related labor costs—in Moosehead’s case, by 50%. Fewer workers should result in fewer injuries overall. In addition, by replacing more dangerous work situations with machines that perform these tasks, the worker’s odds of being injured should also decrease. “If you reduce labor or reallocate it, you reduce workers compensation costs,” Carlson said. “But, you’ve now traded the risk of worker injury with the risk of not having a live person there to fix a problem. Risk never goes away. It just changes.”

As the risk profile changes, insurance carriers must be able to reflect it in their underwriting and pricing. This is easier said than done, however. “Insurers have very little actuarial history to figure out where the risks now stand,” Bernaden pointed out.

Despite these benefits, smart manufacturing is not a cure-all. To start with, there is the dystopian dimension of a factory managed exclusively by smart machines. While computerized equipment may reduce the possibility of human error, when a problem  requires human intervention occurs, there is the risk of having no one around with the skills to address the situation. Rather than one part of the assembly process breaking, the entire interconnected line could conceivably fail.

Bob O’Connor, director of insurance and risk management at Rockwell Automation, said that, while the company’s smart manufacturing systems reduce labor expenses, the “loss of all those eyes” monitoring the equipment may cause trouble. “What happens if there is a flare in a pipeline and nobody sees it, or natural gas leaks and nobody is there to smell it?” he said. “While our products can be configured to address these risks, they need to be identified and discussed before new systems are implemented.”

Another concern is the financial risk of adopting new information technology and the return on the investment. “Companies will question, as they should, the assurances of a payback,” said Jim Davis, chief technology officer at UCLA and co-founder of the SMLC. “If they invest in the technology, will they have the people to run the systems or might they now need to recruit for new skill sets? What if the smart machines fail to mesh with existing modes of factory operations? The organization could lose production capacity. These are some of the reasons why the coalition is working on a smart manufacturing open-architecture platform—to share our experiences to drive down these risks.”

Porter agreed that smart manufacturing is not a panacea. “As you depend on software approaches to equipment and components, the risks of operability, sustainability and maintainability of the assets come up a bit,” he said. “Nevertheless, these risks can be mitigated by the systems’ early warning features telling you when something is awry.”

The risk on all observers’ radar was cybersecurity, “the elephant in the room,” as Davis put it. If a hacker or disgruntled employee should penetrate and infect the software inside smart machines, all sorts of devastating scenarios are possible, from system malfunctions and shutdowns to dangerous product defects. Shelley pointed to several recent cases involving the Stuxnet computer worm, designed by hackers to attack the industrial programmable logic controllers used to control machinery on assembly lines and even the centrifuges that separate nuclear material.

“When you have a very automated manufacturing environment, it opens up the risk of sabotage or bad behavior by people,” he said. “If a company is hacked, it will take them a long time to recover—and even longer, in some cases, to regain their reputations.”

While Anger concurs that security risks are significant, he pointed out that the heightened awareness of the subject mitigates some of the impact. “There’s enough noise around it that people have become highly responsible on the issue,” he explained. Another security advantage is the newness of these systems. “Developers are able to address security risks as the system is being built, as opposed to tacking on security solutions years after the IT asset entered the market.”

Davis shares this view of cybersecurity as a manageable risk. The SMLC recently developed a working group composed of security officers from several smart manufacturing solutions providers. Their job is to review the open platform’s cybersecurity and conduct a detailed audit once it is built. “The providers have invested a great deal into their products’ cybersecurity, but there has not been much in the way of sharing this knowledge,” he said. “This is changing now.”

Undoubtedly, the risk trade-off inherent in smart manufacturing will not deter companies from the investment. The benefits do appear to outweigh the detractions—after all, smart manufacturing is, well, smart. “We need to revitalize the manufacturing sector in this country,” Porter said. “Historically, the societies that survive and thrive are those that make stuff. If you don’t make things, you don’t create value.”
Russ Banham is a veteran business journalist and author based in Los Angeles.