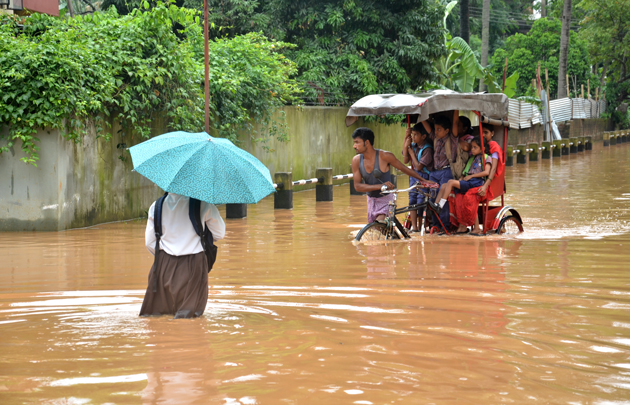 The 2017 monsoon season was particularly devastating for the Indian region. In addition to the casualties and injuries, countless businesses—many that provide international services—were impacted and suffered millions of dollars in damages. But monsoons are becoming less predictable, which is why organizations in affected areas should be considering them in their preparedness plans.

A monsoon is a seasonal, prevailing wind in tropical regions lasting from several weeks to months and brings heavy rainfall. It commonly occurs in Southeast Asia and India. By contrast, a typhoon is a large tropical storm that can be of the same magnitude but lasts for only a few days.

The Southeast Asian season’s heaviest concentration of rainfall occurs between June and September. But with continuous climate change, its seasons are becoming more erratic and are presenting greater damage and flood risks. The 2017 season caused floods and associated landslides of a scale unmatched in recent years.

India, Bangladesh and Nepal were most affected, where a combined 1,200-plus lives were lost and 45 million people were displaced. While the flooding of river basins remains a major cause of disruption in rural and low-lying areas, a combination of problems attributed to the increased flood risk, including:

Information technology companies should certainly recognize monsoon seasons in their preparedness plans. India is a renowned home to many export-driven IT service companies that earn revenue by billing global clients on hourly bases for the services, so even a day’s lull in activity can result in a loss of millions in revenues. Additionally, any shutdown questions the efficiency of its businesses to recover from disasters.

We saw an example of such susceptibility in Chennai, a south Indian city that is a critical IT hub and leading automobile manufacturing center (often called “the Detroit of India”). In November 2015 – well after the season traditionally ends – Chennai was hit by a monsoon and weather systems that lasted for most of the month. The incessant rains inundated the entire city with the worst flooding in a century, leading to the suspension of power supplies by 60% on Dec. 1, 2015. On Dec. 2, the city was declared a disaster area. Operations were suspended in some of the city’s IT hubs and automobile production facilities were also disrupted. The Chennai International Airport was also closed until Dec. 6. The disaster resulted in economic losses of $3 billion as per Aon Benfield, and India’s General Insurance Corporation claims reached nearly $300 million. Just as staggering was that many organizations experienced difficulties implementing their business continuity plans; they simply had not planned for that level of the disaster. Some of them either shifted their employees or transferred the workload to campuses located in the other cities.

Solutions Call For a Change in Approach

Though several big firms claim to be prepared, with some even ISO 22301 certified for business continuity, there are plenty that do not plan for the incessant monsoon rains beyond what is considered the traditional time of the season.

Why? Because preparation and strategy for dealing with oncoming natural disasters has historically been reactive, rather than proactive. Recent years demonstrated that it is time for risk managers to incorporate new ideas from these lessons learned and implement them now that the season has arrived.

Organizations with locations in at-risk areas should reassess their business continuity management strategies; their priorities should be employee safety, manpower readiness, data protection and backup availability. Those gunning for resilient working environments may categorize a monsoon with a high-risk rating due to the impact it has on the business and the probability that is almost certain to occur annually. Companies could prepare specific strategies for a period of heavy rainfall which may cripple their business for weeks.

Many organizations have their alternate sites located in the same city or within a few miles. That is a fine first step, but when a citywide disaster strikes, it is likely that the secondary sites would also shut down. In such situations, the need arises for an alternate provision in another geographical location. Work could be carried out in business centers in unaffected areas, and distributing teams across different locations can also be effective strategies. Besides multiple disaster recovery strategies, organizations could consider a decentralized or specialized business continuity plan, thus ensuring the risks pertaining to particular locations are clearly identified and strategies specific to those risks are adopted.

Regarding the availability and security of data, an organization may decide to have multiple disaster recovery sites located in different zones as a monsoon progresses, since the probability of all the centers being affected simultaneously is quite low.

The availability of communication channels is also vital for the business processes, highlighting the need for multiple internet service providers and emergency notification systems so as to narrow the downtime. With hourly billing revenues hanging in the balance, the economic impact requires data recovery time to be brought down to a span of minutes and not just hours. The cost involved may be high and thus, a proper cost benefit analysis must be carried out.