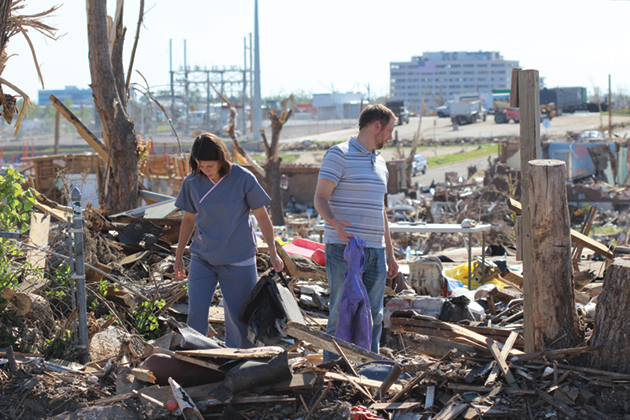 When a natural disaster strikes, there are many factors that will determine how successfully your business can recover. While some of these are controllable, many others are not. In particular, two often-overlooked factors can have a surprisingly large impact on business survival. The first is the speed of macroeconomic stimulus, and second is the migration patterns of the residents. On the surface, these two factors might seem completely beyond a risk manager’s control, but there are ways to make these externalities work in your favor.

Time is Money, But Money is Time

The first factor a risk manager should try to bring closer under their control is time. In the immediate aftermath of a disaster, businesses face a variety of expenses, including damaged structures and contents, local building permits required to begin reconstruction, and products that need replacement. These initial costs can be steep, but they are the easiest to plan for and perhaps the least likely to threaten the business’s long-term viability.

But the cost of physical damage after a disaster is only the tip of the proverbial iceberg. The larger concern is the potential cost of interrupted operations and lost business. The magnitude of these costs—and whether they balloon or stay manageable—is largely influenced by time.

Each day a business stays closed after a disaster not only results in lost income, but also increases the expense of future ramp-up costs the longer operations are shut down. Downtime is further influenced by “hidden” factors such as the degree of infrastructure damage, the number of physical barriers (such as closed streets), political bottlenecks and availability of resources (both financing and people).

Mitigating downtime is one of the most critical actions a business can take to survive a natural disaster. The quicker the recovery process begins, the more likely the business will be successful. In practice, this means your contingency planning should address physical access to your facilities, political and local government clearance for quick rebuilding and, perhaps most importantly, the availability of human and financial resources.

It is clear that speeding up recovery curbs losses—time is money, after all—but what is less obvious is that money is also time. Immediate availability of funds can speed up recovery in meaningful ways. As one example, consider the potential value of engaging a repair contractor on retainer to put your business at the top of their list for post-disaster work. This can limit the degree and expense of follow-on damage such as mold or sprinkler leakage.

To further illustrate this point, consider the following example: Early on a Sunday morning in 2014, a magnitude 6.0 earthquake occurred in Napa, California. In the city center, a three-story administrative building where legal documents were processed was vacant at the time. From the exterior, there was no observable damage. No one entered the building until Monday morning, at which point they discovered extensive flooding due to a single sprinkler head that had sheared off. Many of the legal documents were irreparably damaged. This scenario illustrates how there will always be unplanned surprises in a disaster. But if building management had put a contingency plan in place directing someone to enter the building and turn off the sprinklers within an hour after an earthquake, damage would have been limited.

Companies can also buy time by finding ways to get money and other resources to employees and stakeholders. This will reduce not only downtime and its direct costs but also the loss amplification that occurs as time passes after a disaster.

The Lifeline of Business Viability

Of all the factors that contribute to downtime, the most influential may be availability of staff to run the business. This is because when people move away, businesses are forced to either move with them or hire a whole new set of employees. This not only incurs direct costs from recruitment and training, but indirect costs from lost productivity and stalled operations. Sensitivity to staff availability is especially important for specialized and skilled professions where staff are an important part of the business’s success. As a result, retaining staff is a critical part of business recovery following a natural disaster.

Employee availability is another example of how money can buy you time. When residents have resources to meet their families’ needs, they will be available sooner to participate in the broader recovery process, including returning to work so businesses can continue operations and purchasing goods and services to stimulate the local economy.

The resources people need are not just limited to money, however. While money often means the difference between staying and leaving, so does a sense of social connectedness. Research has found that communities with strong social ties and high levels of interdependency tend to retain more residents and recover from disaster better—neighbors help each other and residents are deeply entrenched in the community, making them less likely to move away. In a recent example, researchers at Purdue University studied social media activity after Hurricane Sandy and found that the documented support individuals received from neighborhood groups and organizations in the immediate aftermath had a measurable impact on moving them towards recovery.

On the other hand, the researchers have also looked at the victims of events like the Fukushima Daiichi nuclear power plant disaster in Japan, which forced residents to leave the area due to ongoing health hazards. They found that when removed from their neighbors and community, residents were far more likely to suffer from anxiety and depression than those who were able to stay in their communities.

Community is a critical factor for both individual and business disaster recovery. If residents are unable or unwilling to stay, the loss of employees and customers can be devastating to the continued viability of local businesses. Disasters can create a vicious cycle in which the loss of residents hastens the demise of local businesses, leading to economic downturn, which results in more people leaving the area.

Therefore, strengthening the community should be an essential component of a business’s disaster recovery plan. The way a company chooses to accomplish this will depend upon the unique needs of the community, each of which has different ways of expressing and building its social ties. Social connectedness could be rooted in schools, local athletic teams, cross-generational activities or an identifying feature of the city. Generating creative and effective ideas to build community and strengthen social ties and support systems is an opportunity for risk managers to engage a wide group of stakeholders. Whether it is by engaging on social media or hosting events that bring people together, social engagement is a critical factor in helping people stay in their homes following a disaster so that they can continue to contribute to the local community and the businesses that depend on it.

The greatest impact of disasters on businesses rarely comes from the physical losses, but rather the damage to the greater economic and community ecosystem within which the business operates. As economists have pointed out, over half the population of New Orleans fled in the aftermath of Hurricane Katrina, and the region has still not entirely rebounded economically from the storm.

The cycle of recovery is interdependent—when people stay in their communities, businesses benefit, which in turn helps the community thrive, creating an upward spiral with strong social ties at its core. By incorporating efforts to buy time and build community into their recovery planning, companies can help promote a healthy recovery-focused ­business ­ecosystem.
Kate Stillwell is founder and CEO of surplus lines insurance broker Jumpstart.