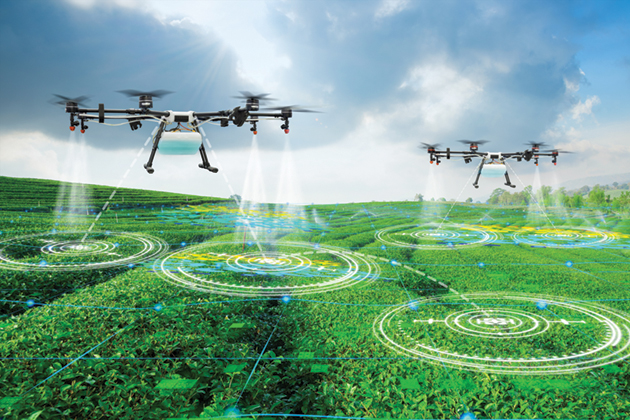 For years, organizations have employed remote sensing technologies that obtain information about objects or areas from a distance—typically from aircraft or satellites—to assess impacts from natural disasters like hurricanes. But today, thanks to a convergence of factors, including a dramatic drop in remote sensing costs, greater availability of more detailed and abundant data, and advances in artificial intelligence, the technology is increasingly being used to mitigate property risks.

“A new generation of remote sensing technology offers more frequent and less expensive data collection that uses lightweight drone aircraft and satellites,” according to a recent BCC Research report. “Built from off-the-shelf parts and delivered to orbit by commercial rocket companies, these technologies are lowering the cost of remote sensing from $10 per square centimeter to pennies.”

In some cases, this data is even available to the public at little or no cost. For example, data from the European Union’s Sentinel-1 satellites can be accessed for free every six days. Imagery is also available from the National Oceanic and Atmospheric Administration (NOAA), the Civil Air Patrol and other agencies.

Drones are a big reason for the decrease in cost. “One of the most valuable forms of airborne remote sensing, LIDAR imaging, can be performed for $50 a square meter [using drones], about one-ninth the price of acquiring the same data with a small manned aircraft,” BCC Research noted.

In addition to dropping costs, the capabilities of remote sensing technology have never been greater. Thousands, or even millions of images of a building complex or work site can be captured by high-resolution cameras mounted on drones or satellites and interpreted using computer vision technology, 3D reconstruction and deep learning in a way that “completely changes the paradigm of risk management,” said Siddhartha Dalal, professor of professional practice in applied analytics at Columbia University’s School of Professional Studies.

AI and machine learning are a critical part of the process because human beings simply cannot pore through the sheer number of images being generated. Instead, computers can quickly cycle through the images and learn to identify components. If you want to mitigate risk at a construction site, for example, you need enough images to train the model so it can determine the difference between a ladder or a trench, or whether a worker is wearing a hard hat. If something seems amiss, the system can quickly issue an alert.

The new technologies also offer greater breadth when assessing property risk. Sheri Wilson, national property claims director at Lockton, pointed out that organizations will now have a visual not just of their property, but of their neighbor’s as well. This can allow an organization to determine if its neighbor has debris on the ground that presents a fire hazard or is doing construction that could impact adjacent properties.

Because of the technology’s promise, the global remote sensing market is expected to increase at a compound annual growth rate of 10.7%, from $10.1 billion in 2017 to $18.9 billion in 2023, BCC Research reported.

The risk management toolkit is evolving, said Beverley Adams, head of visual intelligence services at Marsh. In the past, if you had a risk, you entered it on a spreadsheet and included lots of details. Today, a risk manager still has that spreadsheet, but also attaches a portfolio of images. Some companies are requiring imagery before taking on a property risk, she added. Most companies still require boots on the ground for risk mitigation, but now they have a visual toolkit too.

Dalal believes that a new business model is developing, in which “infrastructure companies” take pictures and process algorithms for insurers and property owners, reducing the need for field inspectors. These infrastructure firms can then employ these algorithms at multiple companies. “It changes the whole paradigm,” he said. “The way we do business will change.”

Take roofs, a key weak point in any building because of potential water intrusion. Historically, insurers looked at a roof’s age as an indication of its condition, but in reality, “people just don’t know,” said David Lyman, CEO of Betterview, a company that provides property risk data to insurers. An older roof can have many useful years ahead of it, while a relatively new roof may already be damaged and susceptible to collapse during the next severe weather event. Roofs remain a challenge for field inspectors because of their relative inaccessibility. But with satellite imagery purchased from a commercial vendor and machine-learning algorithms to read and interpret that roof imagery, a firm can pull an image, interpret it and score it. Its condition can be determined remotely and any damage repaired before a hurricane hits, for example, potentially helping it to withstand the storm.

This means that if you want to see whether vegetation like underbrush or trees is encroaching on a building or structure and increasing potential wildfire hazard, satellite imagery may be sufficient. If you want to monitor building construction, fixed wing aircraft might work well. And if you need to assess a roof’s condition, drones can provide a level of detail down to the individual screw, bolt or roof fastener.

Technical challenges remain, however. “If this is a 100-meter race, we are just out of the starting blocks in terms of using visual intelligence for property risk mitigation,” Adams said. For example, a group of civil engineers from the U.K.’s University of Birmingham found that detecting cracked railroad tracks is almost impossible using satellite imagery. In a paper published in the journal IOP Conference Series: Materials Science and Engineering, they demonstrated that satellite imagery can pick up some larger-scale failures like the washout of a trackbed in a storm, but many train derailments are the result of component failure, and computers need to be trained to recognize individual railway components if remote imagery is to be useful. This can require hundreds of thousands of labeled images for each item, like the switch blades that enable trains to switch tracks. “Determining whether a pair of switch blades is well-positioned through RSIs [remote sensing images] by satellite could be considered,” the authors noted. “However, the appropriate algorithm needs to be used for every moment of operation. This seems to not be feasible for many reasons, such as changes in weather conditions and positioning of satellites, which means failure observations through RSIs by satellites offer a limited contribution to inspection.”

The authors acknowledge that satellite imagery is becoming common in civil engineering projects, such as bridges, canals, dams and power plants, and is likely to improve. As a result, they suggest some intermediate uses might soon be feasible, like flagging failures “less easily detectable than earthworks, such as track irregularities like buckling.” The paper concludes with a caveat, however: “Although such systems are useful for mitigating risk from projects, their productiveness is arguable and operational risk after application is open to discussion.”

Other challenges must also be considered. For example, once deployed, how well will the software perform? Will the algorithms generate a raft of false positives and undermine trust in the process? And, if and when a warning flashes across the computer screen, will employees or government officials actually follow through and mitigate the hazard? “It’s one thing to identify a risk,” Dalal said, “but whether alerts are acted upon is up to human beings.”
Andrew W. Singer is a freelance writer based in New York City.

The Insurance Implications of Blockchain