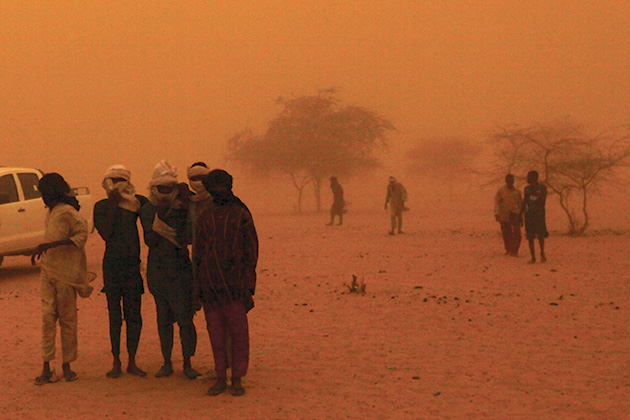 Although they have existed since the 1990s, catastrophe bonds have increased in popularity in recent years. Last year, Superstorm Sandy contributed to a jump to $7.1 billion in issuance, Willis reported, and according to Swiss Re, an all-time high of $20.3 billion of the bonds were outstanding at the end of 2013. The industry also saw landmark transactions in 2013, with a record-setting $1.5 billion bond linked to hurricane risk in Florida and the world's first cat bond to protect against storm surge, created by New York City's Metropolitan Transit Authority after it faced $5 billion in damage in Sandy's wake.

The Western hemisphere's largest transportation authority is not the only group looking for an innovative way to enter the booming cat bond market. On the front lines of climate change, a new initiative from the African Union borrows the cat bond structure to get ahead of increasingly frequent disasters plaguing the continent.

To adapt to an approximately 2°C warmer climate forecast for 2050, the World Bank estimates that sub-Saharan countries need between $14 billion and $17 billion every year from 2010 to 2050. Yet the money has not been coming in to the degree required, and an underdeveloped local insurance market cannot meet the demands of more frequent and increasingly severe extreme weather events. Many countries are already diverting resources to fortify for climate change, but members of the African Union that participate in the specialized insurance agency African Risk Capacity (ARC) are taking a new approach to ensure local resilience.

"Africa needs solutions," Dr. Ngozi Okonjo-Iweala, chair of the ARC governing board and Nigeria's minister of finance, said in a news release. "The XCF will offer African nations a new financing mechanism to manage climate risks by providing direct access to new private capital and by leveraging development partner contributions. We are leading the way in innovative climate finance."

While some may view participation as a political investment, the data-based cat bond structure removes subjective questions about climate change, ensuring appeal to a range of backers across party lines. "It's not about whether or not you believe in climate risk. If you are an investor who does not necessarily believe in climate change or does not think it means anything for extreme weather risk in Africa, then obviously you are going to want to invest in these bonds," said Dr. Joanna Syroka, who is spearheading the XCF effort as ARC program director. "Equally, investing in these bonds may appeal if you think it is an issue and Africa will need additional resources to help adapt to changing climate regimes. Many pension funds now have a component of social responsibility in their investing, and they may also be interested in these bonds as a part of that goal."

Participating countries must be existing insurance customers of the ARC and are chosen based on current involvement in managing climate risks. They also need to have robust adaptation plans already in place before any money is released. Member-states must document that they have implementation-ready plans on the ground that meet XCF guidelines, and each nation's directives must be approved by other members.

"You need to prove to your peers that you can convert timely payout into timely action and convert those funds into effective action on the ground," Syroka explained. "Participating countries also have to prove that they can financially manage these funds when they come in and have the systems to track where the money goes. We ensure that the interventions in mind are ones that we know can be scaled up and implemented, and we would have to see evidence that the government or its partners can do what they say they will do."

This collective dynamic is a key component of the ARC's structure, and helps make sure that funds are used to the greatest possible effect. Further, by inculcating the principles of contingency planning and requiring communal review of each member's research and strategies, the XCF aims to elevate awareness and fortification across the board. Indeed, in establishing the climate index the facility will use, Syroka and her team plan to set bond triggers at thresholds that will help to collectively and objectively identify broader climate trends. Since the XCF index is based on data and trends from a 30-year climate history, deviations may offer more significant insight into changing weather patterns, and help alert all stakeholders in the ARC and beyond. "The idea is to catch that mode-shift into a new climate regime that is likely to give you more extreme events," she said. "We have to set triggers at levels that make sense for the country and that can function as an alert that things are changing."

Dr. Richard Wilcox, founding director general of the ARC, said, "XCF will ensure that African countries and the international community appropriately monitor climate shocks and will be financially prepared to implement specific adaptation measures in an effective and accountable manner, leveraging ARC's existing public-private infrastructure. The XCF allows us to leverage private capital against the risk of increased frequency of severe climate events, while using public money to fund immediate and certain adaptation requirements."

The XCF approach also stands to make a significant impact in the economic and cultural climate in countries that participate. Existing insurance policies with the ARC cover the costs of immediate response to isolated emergencies that may be tied to climate change, such as severe drought or flooding. XCF funds, however, will be issued solely for longer-term adaptation programs, preserving both the funds to be used in crisis and local budget allocations for standard infrastructure and operations. By relieving the strains of both short-term and—if and when they prove necessary—long-term emergency weather risk financing, nation-states can focus on funding projects that will strengthen their broader economic positioning.

"Broader weather risks can spawn massive crises, so we can think of managing the risk as managing the crisis," Syroka explained. "What often happens during a crisis such as a flood is that everything stops. Money is reallocated. Funds for education and infrastructure and other projects are not used because they get dedicated to emergency response. As a result, there are massive implications for the country's economy. The more we can move into a different system where you are managing your own risk rather than diverting funds for a crisis, the more funds will be available to spend on their initial purposes."