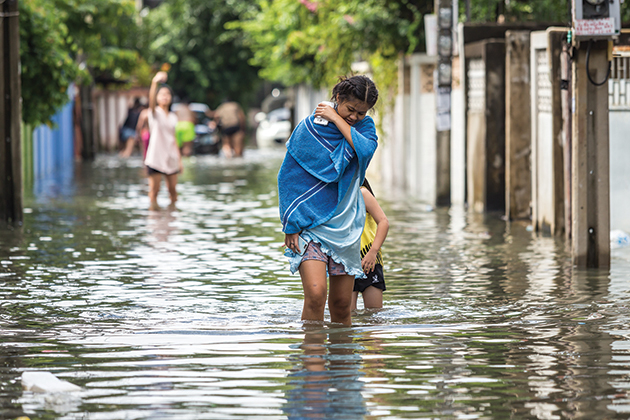 In 2018, natural catastrophes wreaked havoc around the world. Windstorms caused massive losses in the United States, Japan and the Philippines. Droughts hit the United States and Europe, and unusually large wildfires caused devastation in California. Experts have suggested that at least a portion of the world’s global catastrophes in 2018 can be attributed to climate change. Yet, while they could have raised rates after absorbing such large insured losses, reinsurers of property catastrophe exposures left their prices largely unchanged when it came time for renewal in January 2019.

Historically, the reinsurance market has been an efficient purveyor of pricing information to the direct insurance market. They, in turn, pass this information to insureds (often after regulatory approval), who are then able to make economically informed decisions. From asbestos to toxic torts, the reinsurance market has effectively acted as the “canary in the coal mine” by placing a price on insuring “bad acts.” As such, the reinsurance market is uniquely poised to address the economic “externality” known as climate change. But when reinsurers fail to send their customary message that “we are not doing this anymore—at least not at this price” by passing on the cost of climate change to the insureds with the greatest exposure, it begs the question: Is the pricing mechanism broken or is there a backstory that we are missing?

According to Munich Re, Japan suffered seven typhoons, flooding and two earthquakes in 2018, while the Philippines suffered a “super” typhoon and Indonesia endured a deadly tsunami. The United States saw $160 billion in catastrophe losses, which is higher than the 30-year average of $140 billion, but lower than 2017’s $350 billion in losses. Approximately $80 billion of U.S. catastrophe losses in 2018 were insured. Hurricane Michael, which hit Florida’s coast in October, accounted for $16 billion in losses, approximately $10 billion of which were insured. But the most extraordinary U.S. catastrophe losses in 2018 came from wildfire: California suffered its worst wildfire season in history, with extensive loss of life and monetary losses of $24 billion ($18 billion of which were insured).

While experts cannot tell us which disasters are attributable entirely to climate change, they have gone on record saying that the increasing frequency and severity of catastrophes like those experienced in 2018 can, in fact, be linked to climate change. “Losses from wildfires in California have risen dramatically in recent years,” said Ernst Rauch, Munich Re’s head of climate and geosciences, noting that “many scientists see a link between these developments and advancing climate change.” In addition, the National Oceanic and Atmospheric Administration (NOAA) stated that “it is likely that greenhouse warming will cause hurricanes in the coming century to be more intense globally and have higher rainfall rates than present-day hurricanes.”

Yet, while exposure for the reinsurers who cover these catastrophes has increased over the last five years due to climate change, their rates have not. According to JLT Re, property catastrophe reinsurance rates actually softened again at the January 2019 renewal date. In fact, on a risk-adjusted basis globally, the pricing levels are currently 30% below 2013 levels. While reinsurance broker Guy Carpenter observed some rate increases on loss-impacted business, Vice Chairman David Priebe said, “the industry is dealing with questions of pricing adequacy and where and to what degree adjustments might be needed.”

The phenomenon of reinsurance rates stagnating following a high catastrophe year is not new to the industry. The reinsurance industry starts each year with a certain amount of capacity that enables it to cover a certain amount of risk. When catastrophes occur, reinsurance capital is diminished, but can be replaced by underwriting profits on other lines of business, investment profits or the inflow of new capital. If the capital is fully replaced, there will be competition to deploy capital in the following year, leading to only modest or potentially no rate increases, in spite of a recent catastrophe.

This is exactly what happened as of the January 2019 renewals. In spite of catastrophe losses, capacity remains plentiful, even though the future effects of climate change may not be reflected in pricing. Further, Guy Carpenter noted that there are certain initiatives under way that would actually increase capital in the marketplace, presumably through additional ILS offerings. With these initiatives in the works, it is less likely that we will see higher property catastrophe reinsurance rates in the near term. Or, stated differently, if there is a discernible property catastrophe rate increase required due to expected losses attributable to climate change, it may not be implemented in the near future due to market conditions.

Because of its purely economic focus, however, the reinsurance market has the potential to serve as a bellwether for climate change. In prior years, for example, reinsurance pricing has sounded off to expose certain mass torts that were being continuously perpetrated, until the cost of doing “business as usual” became prohibitive.

The free-market fluctuation of reinsurance prices is so unencumbered that it can serve as a driving force when it delivers the full cost of an exposure directly to an insured’s doorstep. In the last 40 to 50 years, due in large part to the price and availability of reinsurance, direct insurers encouraged manufacturers to find alternatives to asbestos and find new ways to limit environmental pollution because they found it economically expedient to do so.

The process of economic decision-making actually benefits from this rapid, unfettered feedback. The decision to invest in a coastal resort, for example, comes with an immediate insurance penalty that reflects the expected losses and, ostensibly, includes the expected increase in frequency and severity due to climate change.

However, the proliferation of capacity has seemingly muddled the industry response to 2018 catastrophes. Without implementing significant rate increases, the reinsurance market is unable to provide its usual unabashed message to the direct insurance market that typically results in a more efficient allocation of capital and ultimately modifies economic behavior. The mechanism is not broken, it is simply flush with capacity. Unfortunately, for those interested in disseminating the allocable costs of climate change, the shock and awe effect that only the reinsurance market can deliver will have to wait for another year.
Key Coleman CPA, CFA, CPCU, ARe, is an advisory services director in Marcum LLP’s ­Philadelphia office and a member of the firm’s insurance industry group.