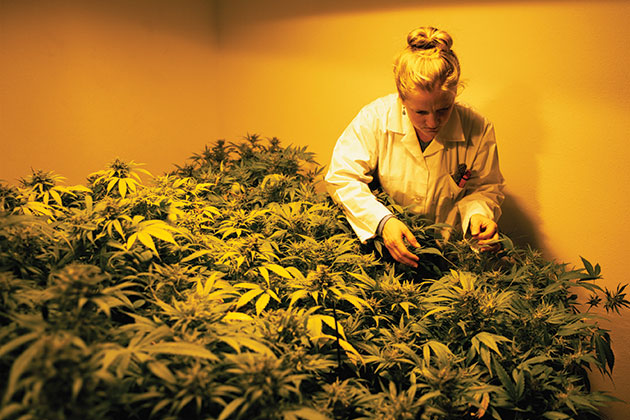 The number of clandestine indoor marijuana grow operations (CIMGOs) in the United States and Canada has exploded in recent years. With the ongoing legalization of medical and recreational marijuana use in many U.S. states, as well as in Canada, which legalized medical marijuana use nationwide in 2001 and reportedly may legalize marijuana altogether in 2018, the trend is expected to continue.

The U.S. Drug Enforcement Agency’s recent report Residential Marijuana Grows in Colorado: The New Meth Houses? described how the legalization of marijuana in Colorado has led to the proliferation of indoor marijuana grow operations in “hundreds of homes throughout the state.” The report noted that “marijuana grows often cause extensive damage to houses where they are maintained,” and “much like the ‘meth houses’ of the 1990s, many of these homes will ultimately be rendered uninhabitable.”

One reason CIMGOs are kept secret is that they are frequently operated in leased properties, ranging from small apartments to large houses and commercial properties. Unsuspecting property owners often do not discover that their properties have been used for CIMGOs until after extensive damage has occurred and the operators have disappeared.

The most significant type of property damage caused by these operations is moisture intrusion in ceiling, wall and flooring materials. This promotes widespread mold growth. The moisture intrusion is driven by a variety of factors, including water spilled during the irrigation of plants, irrigation water that leaks from plant pots, and water that condenses onto interior surfaces from the humid air of the greenhouse-like environments.

Other types of property damage caused by these operations include damage to kitchens, bathrooms and plumbing utilities from heavy use and drainage system back-ups, due to potting soil and plant debris being flushed down toilets and drains. These properties are also damaged by contamination from plant fertilizers and insecticides as well as rodent, termite, cockroach and/or bedbug infestations promoted by wet conditions. There may be modifications to buildings, such as plastic sheeting stapled onto walls and floors, and holes cut into ceilings and walls for the installation of supplementary ventilation systems to manage heat from grow lights. Sometimes electrical system alterations are made to bypass power company meters and avoid paying for the extensive use of electricity for grow lights and supplementary ventilation systems. Fires from exploding grow lights and overloaded transformers can also occur.

The moisture intrusion, mold and other damage caused by grow operations can eventually render properties uninhabitable. Operators of CIMGOs in leased properties will often then pack up their plants, equipment and supplies, and disappear before they are discovered. Because the property damage caused by larger operations (which can have hundreds of plants) is obvious and easily related to growing marijuana indoors, property loss insurers may determine that, based on the conditions of the policy, the damages are not a covered loss. This leaves property owners responsible for the significant expense of remediating and restoring the property.

Operators who have only a few plants sometimes try to remove as many signs of their operation as possible, then blame the property owner for the remaining moisture intrusion or mold damage and rodent or insect infestation. Some of these operators have even sued property owners for habitability issues and personal injury. Property loss insurers and owners of leased properties should thus always consider whether these types of claims are possibly related to growing marijuana indoors.

If the signs of a smaller CIMGO have been largely removed by the operator, it can be tricky for property owners to determine the cause of the damage. But even the best attempts by growers to cover their tracks usually leave behind some of the characteristic signs of indoor marijuana-growing, which can be documented by environmental investigation. Such signs include:


A few of these signs together may be enough to determine that a property was used for growing marijuana indoors. If additional evidence is required, interior surfaces can be sampled for tetrahydrocannabinol (THC), the main psychoactive chemical compound in marijuana.

In a 2013 study, the Colorado State University Department of Environmental Health Sciences assessed the exposures of first responder law enforcement personnel to the contaminants often found in indoor grow operations. The researchers conducted environmental sampling in 30 grow operation sites for a variety of the potential contaminants, including airborne mold spores, fertilizers, insecticides and THC. High levels of airborne mold spores were the most significant hazard, thus, they recommended, first responders should wear respiratory protection when entering grow sites.

The researchers also detected THC on surfaces in 70% of the grow sites studied, but they concluded the concentrations were not high enough to present a significant exposure hazard. These results did demonstrate, however, that surface sampling for THC can be a useful tool for environmental investigators to help document that a building has been used to grow marijuana.

Owners of leased properties should consider proactively prohibiting indoor marijuana-growing in their lease agreements. Although Canada and the U.S. states that have legalized marijuana currently permit growing marijuana indoors, the property damage and health hazards more than justify its prohibition in leased properties.

Property owners should also educate their maintenance staff on the signs of indoor marijuana-growing and perform regular proactive inspections to look for such signs. If a potential CIMGO is discovered, property owners will need an environmental investigator, such as a certified industrial hygienist, to perform a thorough assessment for moisture intrusion or mold and other associated health hazards to determine whether any remediation is necessary to restore the property to a habitable condition. Guidance on assessing and remediating grow operations can be found in publications from the American Industrial Hygiene Association and Canada’s National Collaborating Centre for Environmental Health.

CIMGOs are a rising challenge for property loss insurers and property owners. Better awareness of this issue and understanding the proactive and investigative measures that can be brought to bear are the keys to addressing and mitigating this emerging risk.
Michael Cleveland is a certified industrial hygienist and president and principal scientist at Cleveland Environmental, Inc., in Rancho Mission Viejo, California.