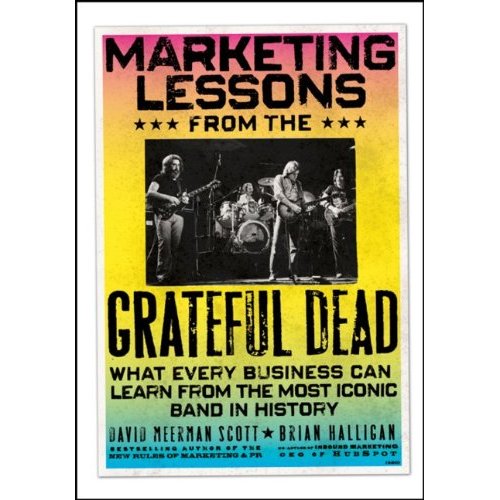 Truth be told, I'm not much of a Grateful Dead fan. Sure, like a lot of people, I listened to them in college, but eventually my interests turned to the louder, faster end of the music spectrum when I discovered that I could listen to an entire punk rock album in the time it took the Grateful Dead to get through one of their seemingly endless jams. But despite the fact that their music doesn't really appeal to me anymore, I do respect the band's ability to inspire their devoted fan base of Deadheads and to remain successful for decades without ever really having a chart-busting hit.

According to Marketing Lessons from the Grateful Dead, however, there is more to the story. Believe it or not, underneath all the tie-dye, patchouli and good vibes, man, lie some valuable lessons for modern business. As authors David Meerman Scott and Brian Halligan point out, the Dead were successful because their unconventional ways were actually a precursor to the social marketing strategies that so many companies have adopted today.

Take, for example, the fact that the band allowed fans to record and share their concerts. While every other band outlawed the practice for fear that people would stop buying concert tickets, the Grateful Dead actually set up special "taper sections" at each show so that fans could record the music for free. The result? The Dead gained more and more fans, sold out stadiums across the world, and became one of the most successful touring bands in music history. So much for diluting their ticket revenue. It is a lesson that any company concerned with giving away their products online would be wise to consider.

Or what about other unorthodox ways the Grateful Dead developed and nurtured their fan base? In the early 1970s, they created a mailing list from a direct appeal on an album jacket when most bands turned up their noses at such direct communication with their audience. They bypassed ticketing services like Ticketmaster and established their own ticketing office to give their fans access to the best seats. And they let their fans organically create a community where eccentricity was embraced. In each case, by going against accepted practices, the Grateful Dead continuously built a loyal following that sang the praises of their "product." If only our own social media efforts were so successful.

The Grateful Dead's story can also teach businesses the value of embracing technology. In the mid-1970s, the band invented new sound equipment when the need presented itself and made their concerts into one-of-a-kind spectacles.

This innovation continued in 2009, when the surviving members of the band, under their newest musical incarnation, debuted a real-time iPhone app that included streaming audio of their performances. Contrast this with companies that still block valuable networking tools like Facebook or LinkedIn, thereby putting their employees at a disadvantage by not allowing them to capitalize on the latest in technology. If a bunch of musicians can see the value in the latest gadgets, businesses certainly should be able to as well.

At first glance, Marketing Lessons from the Grateful Dead seems to be a bit of a stretch -- an excuse for a couple of self-avowed, life-long Deadheads to write about their favorite band. But the book, like the band, defies expectations and proves to be accessible, entertaining and thought provoking.

Not bad for a bunch of dirty hippies.