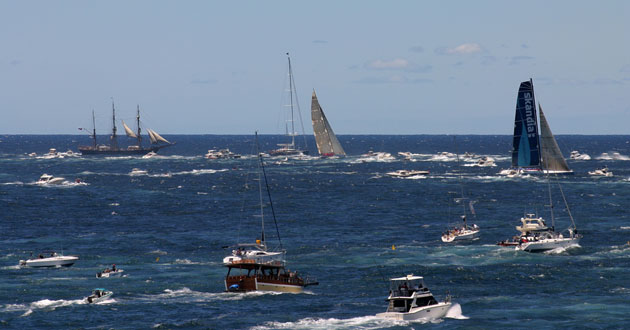 The Sydney to Hobart Yacht Race is considered one of the most prestigious and difficult open water races in the world. Covering 628 nautical miles from Sydney, Australia, to Hobart, Tasmania, the race is known for challenging ocean conditions, blustery winds and frigid temperatures that can test even the most experienced sailors.

But in 1998, the race turned deadly when boats were hit with a “weather bomb”—a sudden, unexpected storm that brought with it hurricane-force winds, torrential rain and waves reaching as high as 80 feet. Of the 115 boats that began the race, only 44 reached the finish line. Six sailors died while another 55 had to be rescued in what was the largest search-and-rescue operation in Australia’s history.

Into the Storm tells the gripping story of how one of the smaller boats in the competition, the AFR Midnight Rambler, not only survived the race, but went on to win the prized Tattersall’s Cup, which is awarded to the winner. In the process, author Dennis Perkins, who also recounted Ernest Shackleton’s Antarctic expedition in Leading at the Edge, shares interesting lessons about the power of teamwork under the most extreme conditions.

The book is divided into two parts. The first deals with the story of the race and is reminiscent of Jon Krakauer’s Into Thin Air, which tells the similarly exciting and tragic story of an ill-fated Everest expedition. (This is particularly fitting given that the Sydney to Hobart Race is often referred to as the “Everest of ocean racing.”)

The second part outlines 10 critical strategies for teamwork as revealed by the experience of the Rambler crew, a group that likely owed its survival to its ability to work together. This works well since lessons on something like teamwork can often end up as simply nice-sounding fluff on a page. But by juxtaposing this advice with such a harrowing adventure, Perkins has created a valuable and engaging guide for any team trying to navigate the treacherous waters of its own corner of the business world.