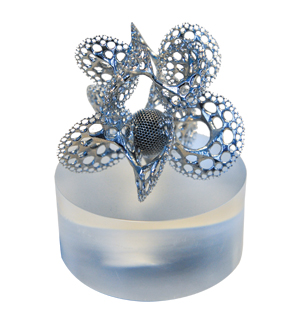 Of all the technology in the Star Trek universe, I always thought the replicator was the coolest. Sure the transporter and the phaser got more screen time, but for everyday practicality, it to was hard to beat a machine that could instantly produce whatever you wanted.

So when I first read about 3D printing a few years ago, I was pretty excited. A printer that produces physical objects may not be as elegant as a replicator, but the concept of creating something out of nothing was basically the same. More importantly, this machine was real. But like many new technologies of the digital age, the promise of 3D printing is counterbalanced by its potential to be a disruptive force that could alter manufacturing as we know it.

For those unfamiliar with 3D printing, which is also known as additive manufacturing, the idea is fairly simple. Just as a traditional printer recreates a digital document by spraying ink onto paper, a 3D printer uses a computer-aided design (CAD) file as a guide as it sprays powdered, molten or liquid plastic, metal and other materials in successive layers to form objects.

According to Cornell University professor Hod Lipson and technology writer Melba Kurman, authors of the new book, Fabricated: The New World of 3D Printing, the possibilities of 3D printing are theoretically endless. With the right design file and the proper printing ingredients (along with some technological improvements), 3D printing could reproduce everything from basic manufactured goods to food, medication, replacement body parts and even entire buildings.

Today, however, 3D printing is more commonly used to create industrial prototypes, along with jewelry, art, toys and other one-of-a-kind trinkets. But this will change quickly as the technology progresses and becomes more affordable. Basic printers designed for home hobbyist use, currently retail for just over $2,000, but the technology research firm Gartner predicts that enterprise-class printers will be available for under $2,000 within the next three years. And as 3D printing becomes more widespread, traditional manufacturers will increasingly be faced with new problems.

The main issue is one of relevance. If consumers one day possess the ability to print their own products, why would they need to give their money to traditional manufacturers (and retailers for that matter)? Manufacturers could point to the uniqueness of their products, but the cautionary tale offered by the music industry demonstrates how well consumers respect intellectual property rights when cheaper alternatives become readily available. The piracy of digital design files generated from sophisticated scans of patented and trademarked goods could easily become as widespread as the illegal distribution of music files was over the last decade. Protecting intellectual property will quickly become a larger issue, and policing violations will be difficult.

In fact, websites have already sprung up with the intention of housing any and all 3D printing design files, regardless of copyright or legal claims. DEFCAD, for instance, is currently being designed primarily as an open-source search engine for 3D printed gun parts, but in an introductory video, its founder said that it “stands against artificial scarcity, intellectual property, copyright, patentable objects and regulation in all its forms” and that it will provide “the things that institutions and industries have an interest in keeping from us—things like access, medical devices, drugs, goods, guns.” Basically, just as The Pirate Bay was to illegal media file sharing, DEFCAD, and any sites like it, will be to 3D printing designs.

Lipson and Kurman argue that perhaps this new technology will require us to reassess outdated intellectual property laws and come up with alternatives more suited to society’s current needs and capabilities. This is easier said than done. The problem is that determining just what would be effective will take time and since 3D printing is still in its infancy, there is little incentive for the establishment to debate new regulations for situations that haven’t come up yet. Of course, record companies thought the same thing, and their inability to react to digital file sharing cost them billions while they watched Apple’s iTunes remake the industry without them.

Ready or not, 3D printing is poised to hit the mainstream. The question for manufacturers, then, is will it be an evolution or a revolution?