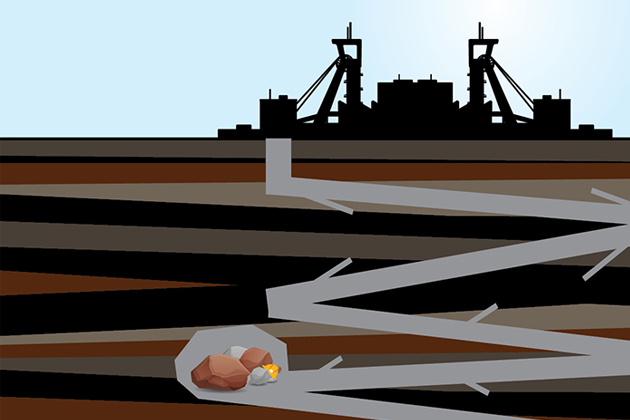 On May 13, an explosion erupted deep in a mine near Soma, Turkey. The resulting fire raged for two days, claiming 301 lives in the country's worst mine disaster. Turkey has a history of poor mine safety conditions, ranking highest in deaths per million tons of coal mined at 7.22-five times the rate in China and 361 times the rate in the United States. After the disaster, protestors criticized the government's response. The Soma mine was privatized in 2005, and many allege that the government is too closely connected to its operation, allowing the mine to get away with lax safety standards and low wages.

Revelations of the exact circumstances surrounding the disaster illustrate the extent that safety was lacking. The explosion occurred during a shift change, which, at Soma, involves the new crew joining the outgoing workers underground to take over their positions immediately. While this may prevent lost work time caused by emptying the mine before sending more workers down, it also may have doubled the casualties. Further, local media discovered that the gas masks used were 15 years past their expiration date.

Turkish police detained more than 20 people, including mine executives, as part of the investigation. At least eight people have been arrested on the provisional charge of  "causing multiple deaths," but their fates-and the future of the country's mining industry-remain unclear.

A look at some of the deadliest mining accidents in history illustrates that, while many of the risks have stayed the same, the industry has made progress at improving safety when the right provisions are in place.

Courrières, France (1906)
On March 10, 1906, a dust explosion devastated a coal mine in northern France operated by the Courrières mining company. Europe's worst mining disaster to date, the incident killed 1,099 people and injured hundreds more. Smoke and toxic gas were detected days before the explosion, but the company refused to halt production to examine the problem. Courrières came under further scrutiny for performing slow, minimal rescue efforts, and having workers erect a wall to seal off the region where some miners remained trapped in order to shield the remaining coal from the fire.

Monongah, West Virginia (1907)
The worst mining disaster in American history claimed the lives of up to 500 men and boys. The explosions could be felt eight miles away, and left a heavily immigrant population widowed and orphaned. Rescue workers also suffered toxic gas exposure during recovery efforts. Paired with several similar incidents, public outcry after the disaster led Congress to create the United States Bureau of Mines in 1910 to inspect facilities and limit the waste of human and natural resources.

Senghenydd, Wales (1913)
A buildup of methane gas caused an explosion that ripped through the west side of this Welsh mine, trapping those who were not killed in the blast under a wall of fire. The United Kingdom's worst mining disaster, the incident claimed the lives of 439 men and boys. Particularly troubling, Universal Colliery was previously found to have violated many government safety regulations when more than 80 workers died at the same mine in 1901.

Benxihu Colliery, China (1942)
In the midst of World War II and the Sino-Japanese War, 1,549 workers perished in the most lethal mining disaster in world history. Japanese invaders had enforced deplorable conditions for Chinese laborers in the Lioning province facility when gas exploded in one of the shafts, sending flames bursting out of the entrance. It took 10 days to excavate all the bodies, which were carted to a mass grave.

Coalbrook, South Africa (1960)
The biggest disaster in mining hub South Africa killed 435 workers when a massive part of the Clydesdale Colliery operations collapsed. Some 900 pillars supporting the tunnel roofs disintegrated while 1,000 workers were underground. Half of the miners were able to escape, but there were no machines in the country capable of drilling large enough holes for a rescue operation. No bodies were recovered and the shaft was abandoned and filled with concrete shortly after rescue efforts were suspended.

Dhanbad, India (1965)
In the Dhori colliery near India's coal capital, 375 miners were killed in a firedamp and coal dust explosion. A hurricane lantern caused the initial ignition, which management alleged was intentional.

Wankie, Rhodesia (1972)
A methane gas explosion in modern-day Zimbabwe resulted in the deaths of 427 people. Hundreds were killed instantly, while others were trapped alive and suffocated. Rescue efforts went on for four days before officials decided to end the search for survivors and seal off the colliery.

Dhanbad, India (1975)
Just 10 years after the Dhori disaster, 372 people died in an accident at the Chasnala colliery. A coal dust explosion in the deep mine damaged the roof barrier, which had a large body of water just above it. Most of the deaths resulted from the severe flooding that followed.

Upper Big Branch, West Virginia (2010)
In the worst American mining disaster since 1970, Massey Energy was found responsible for the deaths of 29 miners when high methane levels and flagrant safety violations contributed to a massive coal dust explosion. The Mine Safety and Health Administration issued 369 citations totaling $10.8 million in penalties, and Alpha Natural Resources, which had bought Massey, settled corporate criminal liabilities with the U.S. attorney for $209 million.

Improving Resilience in the Wake of a Crisis

How to Navigate the Hurricane Claims Process