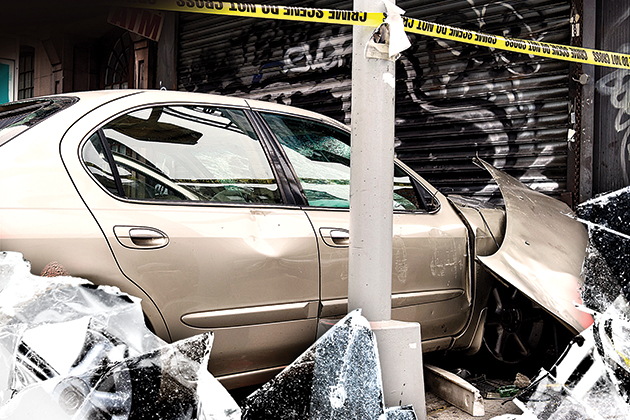 As many as 60 times a day in the United States, a vehicle crashes into a commercial building, be it a restaurant, retail storefront or office suite. This surprising statistic highlights a largely overlooked problem that touches on premises liability, workplace safety, property and casualty insurance, and underwriting.

Many of these crashes are a result of driver error and often occur because businesses tend to orient themselves toward the street or parking lot, with their entrances facing forward for maximum visibility. Unfortunately, this design strategy creates vulnerabilities and, even though there are simple solutions, the problem persists because of lack of awareness, applicable building codes and the will to correct the situation.

The following are some examples of such crashes from an eight-week period earlier this year:


These accidents are in no way out of the ordinary. Traffic collisions send cars careening into buildings every day. Drivers under the influence are involved in every kind of accident all too frequently. And there is an increasing amount of evidence that elderly drivers are responsible for a growing number of "pedal error" accidents, which include hitting the gas pedal instead of the brake, or putting the car into "drive" rather than "reverse."

An Aging Population and Distracted Drivers
The Storefront Safety Council has been collecting data from various sources in an effort to quantify these types of accidents. Statistics consistently show that almost half of all storefront accidents are the result of pedal error, and that drivers with less than five years driving experience and drivers over 70 years old are most prone to committing such errors. Unfortunately, this sets the stage for a surge of these crashes in coming years.

Two trends are responsible for this potential increase. First, according to the demographics of aging in the United States, more than 10,000 Americans turn 65 years old every day. In 2012, there were about 23 million licensed drivers above the age of 70. By 2025, the number of drivers over 85 will have more than doubled. These drivers are the most prone to the types of errors resulting in vehicle-into-building crashes, so there is likely to be a corresponding upswing in these types of accidents.

The second trend is the increasing use of mobile technology. Recent data and highly publicized law enforcement efforts evidence the increase in distracted driving accidents, and inexperienced drivers have been shown to be the most easily distracted of all. While all drivers face smartphone distractions such as calls, texts, navigational aids and videos, younger drivers seem to be most prone to accidents when distracted due to their lack of experience.

Scope of the Problem
Most of these accidents occur on private property, making national or even local statistics difficult to find. While there are effective methods that can collect all manner of accident data on federal highways and mechanisms for collecting information from police reports on crashes on local streets, parking lot crashes are poorly quantified. The Storefront Safety Council has gathered data on more than 5,000 crashes in one of the largest ongoing databases of its kind in the country.

Working with the Texas Traffic Institute at Texas A&M University, researchers found that the 150,000 gas and convenience stores in the United States have a collective vehicle-into-building crash accident rate as high as 20 per day. The underlying data was obtained from anecdotal reports, media publications and actual company crash statistics made available as a result of legal proceedings. If each of these 7,300 accidents resulted in claims for property damage and personal injury claims of just $10,000, that adds up to an annual cost of more than $70 million for gas and convenience stores alone. When expanded to include all commercial buildings, the cost could swell to as much as $200 million per year.

While the number and severity of crashes into commercial buildings is surprising to many, it is not news to owners and operators of the businesses that are struck. The Storefront Safety Council has documented so many cases where drivers have driven into and through grocery stores that the entire industry is considered "on notice" to take corrective action or face increased liability and negligence claims.

In one personal injury lawsuit, the defendant retailer found that its 7,000-plus stores nationwide are struck by a vehicle at a collective rate of more than 1.5 times per day.  Another national chain revealed that their 600 stores had been hit 230 times in a six-year period, including 71 stores that were crashed into more than once.

Another aspect of the vehicle-into-building crash phenomenon is the increasingly frequent, deliberate use of a vehicle to gain entry into a building to commit theft. "Crash and grab" theft often involves using a stolen vehicle to commit a break-in, and a getaway car to load up the loot and drive away. "Soft targets" like retail stores usually have unprotected storefronts, making it easy for a vehicle to break through so that thieves can enter and exit quickly and then drive away. The most common targets are ATMs, cash, electronic gear, guns and other high-value items, but a number of thieves simply want beer, lottery tickets or cigarettes. Whole storefronts can be destroyed in the process-the theft of a $2,500 ATM might cause $25,000 to $50,000 in damage and repair costs.

Crash Prevention
Since we cannot prevent drivers from losing control of vehicles or stop people from hitting the gas pedal instead of the brake, it is prudent to prevent these errant vehicles from striking buildings in the first place. The concept of prevention through design works on the basis that, when fewer vulnerabilities are designed into a project at the beginning, fewer safety issues will occur over the life of that project. Whether these crashes are accidental or part of a theft scheme, certain steps can be taken to deter them that do not have to cost a fortune or make a business look like a fortress:


Global standards organization ASTM International has also begun work on a testing protocol for barriers designed to protect people and property at "parking lot speeds" up to 30-miles-per-hour. The WK13074 standard will form the basis for additions to building codes. "These tests will provide architects, engineers and building officials with the tools needed to select effective safety systems for their projects," said Dr. Dean Alberson of Texas A&M, co-author of the Texas Traffic Institute study and co-chair of the ASTM committee. "This will reduce accidents and improve safety for everyone." The committee expects to finalize this standard at a national meeting in October.

Vehicle-into-building crashes not only capture the public's attention, but that of the legal community as well. The risk management industry can take the lead by looking at ways to work with owners of commercial properties and business clients to reduce the number and severity of these accidents. This problem is not going away. As such incidents are largely preventable by simple measures like realigning parking spaces or properly installing tested and effective measures, there is no reason the industry cannot work with stakeholders to protect pedestrians, shoppers and employees in the places where they work, play and shop.
Rob Reiter is an expert on perimeter security and retail and pedestrian safety and co-founder of the Storefront Safety Council. He is also co-chair of the ASTM committee that is writing the low-speed vehicle barrier standard.