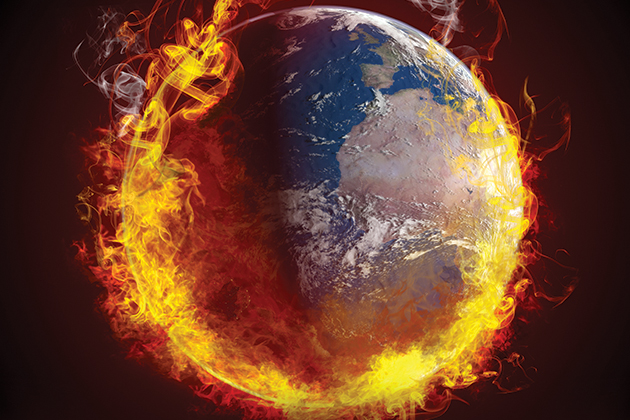 Insurers and reinsurers have been looking at global climate change for some time now. In a 2014 Sigma report on natural catastrophes and other disasters, Swiss Re stated, “Climate change is widely acknowledged to be caused by greenhouse gas emissions from human activity, and could lead to increasing frequency and intensity of extreme weather events. According to the Stern Review on the Economics of Climate Change, if left unchecked, the cost of climate change could increase to around 20% of global GDP by the end of this century. Dealing with climate change requires a reduction in greenhouse gas emissions alongside an integrated approach to disaster risk management.”

Recent findings show that such concerns are warranted. In a January report, the National Oceanic and Atmospheric Administration (NOAA) said that 2014 was the hottest year since record keeping began in 1880, breaking records set in 2005 and 2010. The average temperature across global land and ocean surfaces was 1.24°F (0.69°C) above the 20th century average. May, June, August, September, October and December all broke temperature records for their respective months. This also marks the 38th consecutive year that the annual global temperature was above average. Including 2014, nine of the 10 warmest years in NOAA’s 135-year period of record have occurred in the 21st century.

In response to the warming trend, the Obama administration announced a program of executive actions designed to reduce carbon pollution by setting emission standards for U.S. power plants and to inform the public about the dangers of inaction.

“It is an economic imperative to invest in mitigating the effects of greenhouse gases to slow the pace of climate change and achieve a long-term reduction in the economic impact from adaptation costs and losses,” said Carl Hedde, head of risk accumulation for Munich Re America. “Munich Re’s NatCatSERVICE database shows that the number of loss-relevant, weather-related natural catastrophes worldwide has almost tripled since 1980. This cannot be attributed to climate change alone, but we do think that the warming climate—depending on region and peril concerned—does play a certain role. Finding ways to create broader community resilience against extreme weather events is critical.”

Hedde pointed out that the insurance industry is squarely in the crosshairs of a changing climate. “The insurance industry and its customers are directly affected by the increasing costs of severe weather, and must work in partnership with government agencies to drive mitigation and adaptation efforts,” he said. “Our industry helps individuals and communities rebuild their lives after extreme events, while federal, state and local governments provide post-event subsidies in the form of disaster assistance. We must do more to fortify structures before an event and improve our national infrastructure if America is to remain a global leader and thrive in an increasingly severe weather environment and an increasingly competitive world.”

As a result, risk modeling has drawn a great deal of interest, particularly as technology and software become increasingly sophisticated, allowing flooding and other phenomena linked to climate change to be examined in much greater detail.

“Risk modeling has become more comprehensive and refined as significantly more data is added to the models from new events,” Hedde said. “With each extreme weather event, we gather additional data and test how well the models perform. This new data and increased computing power have allowed the industry to take a more granular view of risks and to model very specific events. We then add our own insights and experience about climate variability to more accurately reflect the risks.”

“Our primary focus is the risks that insurers face today when it comes to climate change,” said Dr. Jayanta Guin, executive vice president of research and modeling at AIR Worldwide. “What we know is that the Earth’s temperature has been steadily increasing over the past few decades. Sea levels are rising globally—the mean sea level in the northeastern United States has risen by one foot in the last century. Over the next hundred years, the mean prediction is for a possible further increase of three feet.”

Catastrophe modeling firms have been examining these trends to determine what their impact might be in the future. For example, in April 2014, Risk Management Solutions (RMS) teamed up with the Risky Business Project, a research effort co-chaired by former New York City Mayor Michael Bloomberg, former Treasury Secretary Henry Paulson and Farallon Capital Management founder Tom Steyer, to quantify and publicize the economic risks the United States faces from the impacts of a changing climate. They identified certain key risks, including the possibility of rising sea levels creating large-scale losses of coastal property and infrastructure, extreme heat threatening labor productivity, human health and energy systems, and shifting agricultural patterns and crop yields.

AIR Worldwide also works to understand the effects climate change could have on businesses. “We’ve been looking at the long-term climate change impact on certain meteorological phenomena, such as tropical cyclones, extra-tropical cyclones, sea-level rise and so on,” Guin said. “The science is not yet mature enough to predict with accuracy the changes in frequency and severity for such storms, but credible scenarios can be studied. We have been looking at the financial consequences of climate change as one way of highlighting the impact. For example, Miami is just a few feet above sea level, so we look at which parts of the population would be displaced and how much property would be lost due to a sea-level rise.”

AIR recently developed an inland flood model for the entire United States. “It looks at a range of possible outcomes from precipitation and intense precipitation, and accounts for on-flood plain and off-flood plain losses,” Guin said. “It looks at everything from the impact of long-duration events that can lead to flooding on rivers like the Missouri and Mississippi to short-term events such as last year’s flooding in Colorado. We use global climate models for this and then concentrate on the impact on areas of the country using numerical weather prediction models. These thousands of plausible scenarios feed into hydrological models that look at where surface water can flow.” Flooding is a relatively new phenomenon to be modeled. Precision is necessary—a difference of just a few feet in elevation can be the determining factor in whether or not a property is flooded.

Although models have been created for various areas and scenarios, they are just a part of the bigger picture—and they do have some drawbacks. “Most of the (re)insurance companies, while they might have scientific advisers, take climate models and integrate their findings into their analyses,” said Frank Nutter, president of the Reinsurance Association of America. “Companies increasingly compare outside models on an on-going and long-term basis. The problem is that the geospatial impact of global warming is very large, so it is very hard to get onto the smaller-scale, local impact.”

Given current trends, all insurers and reinsurers are carefully monitoring the issue of climate change. However, there do seem to be some differences emerging between Europe and the United States. “A lot of U.S. insurance companies would say that climate change would show up in their claims data,” Nutter said. “They’re not forward-looking when it comes to this. Insurers tend to be reliant on a retrograde business model. It’s like driving a car by looking in the rearview mirror. There’s a short-term time horizon of one to two years. It seems to me that our industry—both insurers and reinsurers—should be more forward-looking.”

Nutter said that the RAA has been focused on the development of better building codes in the United States to instill more of a natural disaster focus and help preserve natural features like mangroves and sand dunes. “We’re being pretty aggressive about doing that,” he said. “We’ve been meeting with the Obama administration as to how we could be doing better at government issues such as building more resilient communities and communicating information about the risks to the public. We’re also working more with FEMA about flood risks and how to communicate those to the public.

“There are some tensions though. The National Flood Insurance Program is a problem—it is hugely in deficit. The 2012 reforms to address this were a real achievement, but then real estate interests rolled much of them back,” he added.

Hedde suggested that the insurance industry may soon need to adjust rates to account for climate change effects. “In the short-term, (re)insurance prices are largely determined on the basis of supply and demand. In the long-term, however, they reflect the calculated loss expectancy. Since the influence of climate change increases with time, the insurance industry must recognize, quantify and make allowances for these trends in the form of risk-adequate pricing.”

He believes it is critical that government, the industry and individual communities work together to find ways to create broader community resilience against extreme weather events. “This is a win-win strategy that would be valuable independent of climate change and its effects,” he said. “Mitigation and resiliency efforts can be considerably less expensive than paying for a loss. More importantly, they can save lives.”

In the meantime, a wide variety of studies continue to emerge from the scientific community that detail how global climate change could impact everything from weather patterns to sea levels to farming. Insurers and reinsurers need to decide if they should use these studies as the impetus for proactive measures, or if, as Nutter said, they want to continue driving by looking in the rearview mirror.
Marc Jones is a U.K.-based freelance writer.