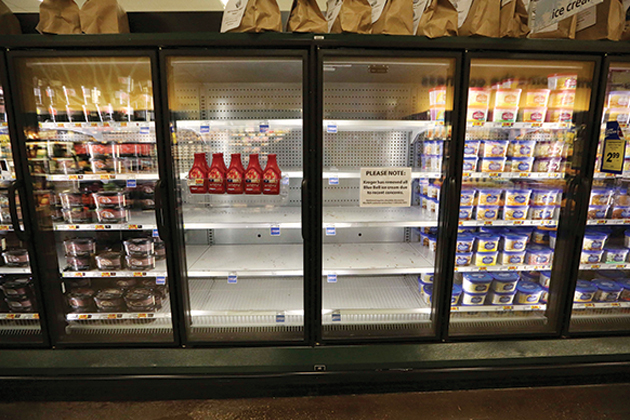 By April, three people had died and 10 were hospitalized after being exposed to listeria in Blue Bell ice cream. In response, Blue Bell CEO and President Paul Kruse announced a recall of all of its products on the market, offering refunds for all items purchased both in the United States and abroad—approximately eight million gallons of ice cream and ice cream products. He added that the company would also temporarily shut down all production facilities to undergo testing to identify the source of contamination, implement new, more rigorous cleaning and testing procedures, and provide additional training for employees. “At this point, we cannot say with certainty how listeria was introduced to our facilities and so we have taken this unprecedented step. We continue to work with our team of experts to eliminate this problem,” Kruse said.

It would likely take months before even limited production could resume, he added, and new products would only be released following “test and hold” procedure, which requires testing each batch and confirming its safety before it leaves the manufacturing facility. The trouble may go deeper, however, as the FDA reports the company had evidence of listeria contamination at one of its plants as far back as March 2013.

While such drastic recalls grab headlines once or twice a year, contaminated food and foodborne illness incidents are far more frequent. Blue Bell’s was not even the only ice cream-related recall in April. While no illnesses were reported, after samples tested positive for listeria, Ohio-based Jeni’s Splendid Ice Cream also recalled all of its products on the market and destroyed 265 tons of ice cream as part of a recall estimated to cost the company $2.5 million.

According to a study by the World Health Organization’s Foodborne Disease Burden Epidemiology Reference Group, there were an estimated 582 million cases of 22 different foodborne diseases worldwide in 2010, the most recent year for which data is available. From those cases, 351,000 people died as a direct result of ingesting contaminated food. Most of these cases occur in Africa and Southeast Asia, but the Western world is not insulated from the peril. In the United States, 48 million people—one in six—get sick, 128,000 must be hospitalized and 3,000 die from food-related illnesses every year, the CDC reports. The Department of Agriculture estimates that the resulting annual cost of treatment and lost income amounts to $15 billion or more.

Globalization has lengthened the food chain and made oversight harder, complicating foodborne disease outbreak investigation and product recall in event of an emergency. “Food production has been industrialized and its trade and production have been globalized,” WHO Director-General Dr. Margaret Chan said in a statement. “These changes introduce multiple new opportunities for food to become contaminated with harmful bacteria, viruses, parasites or chemicals.”

Managing that risk in individual facilities and throughout the extended food-supply chain is a daunting and shared burden, implicating everyone from farmers and shippers to food processors and purveyors to consumers and regulatory bodies. In devoting this year’s World Health Day (April 7) to the critical issue of food safety, the agency specifically called on governments to implement measures on a global and national level to protect against food contamination and respond quickly to food-related outbreaks.

Yet in the United States, some of those critical measures are currently in limbo. In the wake of foodborne illness outbreaks that sickened thousands of Americans who consumed tainted eggs, peanut butter and spinach, Congress passed the Food Safety and Modernization Act (FSMA) in 2010. The sweeping legislation presents the first major overhaul of the country’s food safety practices since 1938. It features substantial changes to the way food is grown, harvested and processed, including regulations that start on the farm and run all the way to granting the FDA increased power to initiate and oversee recalls.

The Congressional Budget Office said the FDA would need a total of $580 million from 2011 to 2015 to carry out the changes called for by FSMA. Yet Congress has appropriated less than half of that, according to a report released in April. That funding does not even represent the total amount needed to fund the law’s mandates. The Department of Health and Human Services tried to impose user fees on the food industry to fund half of FSMA, as they do with a number of other FDA programs. Since the law was passed, the FDA’s proposed budgets included user fees that would cover the majority of the burden to enact FSMA, and requested $236 million from Congress last year, with another $229 million expected to come from food companies. Lawmakers rejected the proposal after lobbying from the food industry, but Congress also would not agree to fund the reforms itself. The FDA received $27.5 million for FSMA in the current fiscal year, the New York Times reported, and the agency requested $109.5 million for next year—only half of the money needed, if the full sum even gets approved.

“If we keep shortchanging the FDA, it will continue to cost us billions of dollars a year to deal with foodborne illness,” Rep. Rosa DeLauro (D-Conn.), one of the writers of the law and a member of the subcommittee that oversees FDA funding, told the Times.

While some parts of FSMA and the means to enforce it are still pending, businesses involved in the food chain already have initial guidelines to begin preparing for, and final regulations will be published later this year. The law puts more of the burden on food companies to ensure that products are safe instead of relying primarily on government inspectors. Further, it requires better record-keeping, contingency plans for handling outbreaks, measures to prevent the spread of contamination, and increased oversight over the international components of the food supply chain. The act requires the FDA to inspect more foreign facilities tied to the American food chain, doubling the number of facilities visited  and inspected annually over five years. Although the FDA has thus far failed to execute this directive to the extent laid out in FSMA, given the more complicated dynamics of the food chain, that may only be a temporary reprieve for businesses that will soon be required to get a full view of the supply chain or implement more rigorous oversight of plant operations.