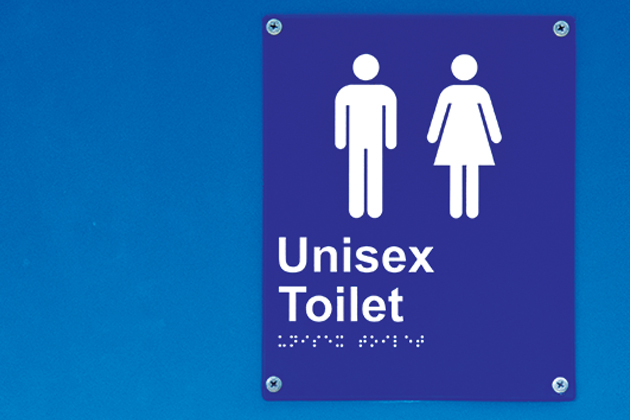 The National Transgender Discrimination Survey found that 90% of respondents were harassed or mistreated at work for being transgender or hid who they were to avoid such treatment, and 26% had lost a job because they were transgender.

The policy calls for all employers to permit employees to use restrooms that correspond with their gender identity, regardless of biological sex.

“When a transgender worker is prevented from using the same restrooms as everyone else, it is not only humiliating—it threatens their physical health,” said Mara Keisling, executive director of the National Center for Transgender Equality. “Federal law requires all workers to have reasonable access to restrooms, and also prohibits discrimination against transgender people. This is a classic example of a workplace hazard that is potentially dangerous but easy to prevent.”

OSHA also noted that the best policies should provide additional options that employees may choose but are not required to use, including single-occupancy gender-neutral (unisex) facilities, and multiple-occupant, gender-neutral restrooms with lockable single-occupant stalls. Further, employees should never be asked to provide medical or legal documentation of their gender identity in order to access the appropriate facilities, and none should be required to use a segregated facility apart from other employees because of their gender identity or transgender status.

These latest OSHA guidelines follow executive orders from President Obama and other emerging guidance from labor-related agencies as part of a clear move by the federal government to issue more protection for transgender employees. While Title VII of the Civil Rights Act does not explicitly cover transgender status, the Equal Employment Opportunity Commission has made clear since 2012 that it interprets discrimination against a transgender individual as discrimination because of sex and thus prohibited behavior under the measure.

In April, an executive order banned federal contractors who do more than $10,000 a year in federal business from discriminating on the basis of sexual orientation or gender identity. Such federal contractors employ more than 20% of the American workforce—28 million workers. The Office of Personnel Management has issued a comprehensive guide for these entities to best ensure that they are compliant and treating all employees with dignity and respect while preventing discrimination in the workplace. OPM also called for all federal agencies to review their anti-discrimination policies as well. In addition to restroom access, other issues addressed—and likely to face increasing scrutiny—include employment practices such as hiring and promotion, and the consistent use of preferred pronouns, the subject of a recent EEOC ruling against the Department of the Army.

Legal implications span far beyond government entities and federal contractors, including fines and enforcement actions against any corporation, according to Nesheba Kittling, a partner at employment law firm Fisher & Phillips. “The EEOC can issue a commissioner’s charge and proceed with litigation, and the company is subject to all the damages available under Title VII, including back pay if the individual was terminated, front-pay, or punitive damages that are based on the size of the company,” she explained. “There is a cap on the possible damages, but it can be rather large, and we are already seeing a number of cases both filed and settled.” There could also be fines under OSHA for conditions that made an employee feel unsafe, she noted.

Given the spate of recent regulatory activity, she urges risk managers to focus on emerging guidance and their workplace policies, as both the stakes and scrutiny are growing rapidly. “I think they’re going to be very aggressive about it,” she said. “In its strategic enforcement plan, the EEOC specifically said that one of its goals is to provide more protection for the LGBT community, so it is actively trying to find cases to establish case authority that provides such protections. The same is true of OSHA as well.”

The surge in media attention will only further this trend, keeping issues of workplace equality on the minds of employees and regulators alike. Many companies are not ready: According to the Human Rights Campaign, 91% of Fortune 500 companies include sexual orientation in workplace policies, while protections for gender identity lag behind at 61%.

Regularly updating company policies and having employees sign a recognition of receipt and review is a critical step that should be taken immediately, and reassessed annually, Kittling advised. “I think it’s all part of your EEO statement and your anti-discrimination and harassment statement,” she said. “I like to see explicit reference to gender identity in there and I personally list as many protected categories as possible in those statements. Then, if any issues arise, you can point to it as a clear expression of what your policy is.”

It may not be that simple, according to Victoria Nolan, risk and benefits manager at Clean Water Services, who draws upon both her professional background and personal experience to offer private consulting services on transgender and diversity issues in the workplace. “There needs to be a team on this,” she said. “Risk or HR cannot do it alone—the C-suite or upper management need to drive it. They don’t necessarily have to design the strategy, but they need to be involved in determining the direction they want to go. Then, the company needs to get a team together and have both HR and risk look at policies to evaluate what needs to change, and identify and navigate any potential pitfalls.”

As transgender employees become a greater presence in the workplace, education and sensitivity become even more critical in building a safe and compliant environment.

Federal protections and a national dialogue may also encourage more transgender employees to come out at work, increasing the urgency of preparation. “Because of the increase in acceptance, there will be—and has been—an increased level of activity of those who are moving toward transition, because there are a lot of people who have been living in the shadows who are now willing to step forward,” Nolan said.

As transgender employees develop a larger presence in the workplace, education and sensitivity become even more critical in building a safe and compliant environment. “Training is key. The more you train employees, the better equipped they are to handle issues, and the more they become attuned to the sort of sensitivity that comes along with these issues that may not be as present in other matters,” Kittling said.

More comprehensive training programs not only help prevent workplace problems, but may also help mitigate some of the risk if any do arise. “If you show that managers are being respectful, it can go a long way toward quashing certain situations,” she said. “If employees feel comfortable resolving problems internally rather than looking to an outside agency to file charges, there’s also no risk of fees or litigation.”

Nolan agreed that having policies documented is important, but training is critical. “There must be education for the management of the various facilities and even for the employees, and it needs to happen before the issue comes up,” she said. “This serves two purposes: it gets people used to the idea of having conversations about the issue without being confronted by it in practice, and if the company happens to have somebody who is considering transitioning, it tells them what the environment and policies will be and how it will be handled, so they can decide whether to stay and work and transition, or if they need to seek employment elsewhere.”

Indeed, failing to address the subject before workers face issues can translate into the risk of losing valuable talent. “Before my transition, I was looking at a very black void of information, and I was very hesitant to be the one to step forward and ask, so the only things I had to judge on were the lack of communication or anecdotal comments that people had made,” she said.

“Especially in light of Caitlyn Jenner and her new show, this is going to continue to be present and in people’s minds,” Kittling said. “There are some people who are going to be uncomfortable with that and may bring that to the workplace. You want to quash anyone who is saying anything inappropriate or making jokes, and you want to do that early on. You need to send a message that it will not be allowed, because I can see that getting out of control quickly and there being harassment claims, especially in certain industries.”

Indeed, it is essential to make sure that company policy filters throughout the workforce, Nolan urged. “Companies can make the effort, but they have to make sure it gets down to the individual employee level, or at least a work-unit level, because you can have rogue work units that make somebody’s life miserable and, by the time the company finds out about it higher up, it’s too late and they already have a lawsuit on their hands.”

“One of the encouraging things we’re seeing is that people are not waiting for the laws to change,” Nolan said. “There are companies that are being proactive. In some cases, for example, companies that are functioning in multiple states realize that it is extremely difficult to have a variety of offices and just comply with state law, so they are starting to look at the probable end results and move in that direction now.”

Seizing that momentum can also offer a competitive edge. “One of the basic decisions companies can make is how proactive they want to be, and if they want to be an employer of choice and attract those who are different,” she said. “Companies that do should be having discussions with employees about a range of diversity issues and how they are doing, and should even review their application process.” Some more proactive companies, she said, are revising applications to include wording like “other names you have used in the past” or “preferred names,” which allow transgender applicants to pass a background check and provide a full work or education history, regardless of when they transitioned. What’s more, she said, being proactive and asking about past names or preferred pronouns is a sign that the company recognizes that it will see these differences and will be accepting.

Corporate evolution is also spurred as changing social sentiment threatens the bottom line. “Yes, there are civil implications like labor enforcement, but there is also the customer and reputational risk,” Nolan explained. “Consumers have been putting a lot of power on diversity. There are a lot of people who believe in equality and are willing to send their dollars elsewhere.”