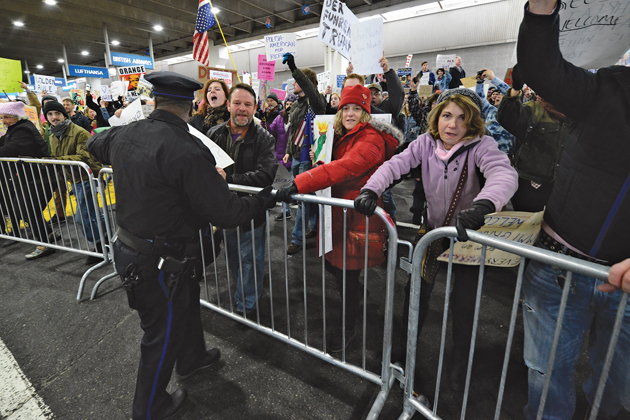 Demonstrating that his statements on the campaign trail were anything but empty rhetoric, the flurry of executive orders issued by President Trump in just his first few weeks in office has sparked debate from all points on the political spectrum. The most controversial has been his travel ban, a national security measure that temporarily suspended the U.S. Refugee Admissions Program, prohibited travelers from seven Muslim-majority nations—Iran, Iraq, Libya, Somalia, Sudan, Syria and Yemen—from entering the United States for at least 90 days, and suspended the admission of refugees from Syria indefinitely. Although the legality of the order is being debated in the courts (at press time, the order had been blocked by a federal judge), companies have nevertheless been forced to respond in order to protect their operations, employees and reputations.

Soon after the order was signed, for example, Google elected to recall many of its employees who were travelling abroad and advised those from affected countries not to travel outside of the United States until the order was lifted. Law firm Fisher Phillips similarly issued a client alert advising employers to suspend all work-related international travel for employees from the seven affected countries and suggested that employers even go one step further and postpone visa appointments and travel for any foreign nationals until the situation becomes less volatile.

Other businesses sought clarity from the State Department as to how the order might affect their personnel. The National Basketball Association initially expressed concern that two of its Sudanese players in particular would not be able to travel without restriction, while Microsoft asked the government to grant exceptions that would permit employees who could be considered “responsible known travelers with pressing needs” to travel freely.

Businesses in sectors ranging from tech and retail to meatpacking and construction criticized the ban, with some saying that it violated their corporate principles. Others have pointed to the uncertainty the ban has created, which will make it more difficult to conduct ongoing business, attract valuable workers from outside the United States and compete on an international scale.

In addition to operational concerns, many businesses have also found themselves under fire from unhappy consumers in the wake of the order. Trump supporters have threatened to boycott Budweiser over an immigration-themed Super Bowl ad and Starbucks for pledging to hire 10,000 refugees over the next five years. Detractors of the ban, meanwhile, have called for boycotts of their own, such as the backlash against Uber after it was thought to have undermined a taxi strike in New York that was organized to protest the ban. Some 200,000 people deleted their Uber accounts in response. Amid increasing public pressure to distance the company from Trump’s policies, CEO Travis Kalanick even dropped out of the president’s economic advisory council.

Whether the travel ban will remain in effect in the long run remains to be seen, but it is evident that many companies will need to rethink their international strategies. It has long been standard operating procedure for risk-savvy international companies to have a plan in place for a natural disaster that compromises their supply chain or political unrest abroad that threatens employee safety. Unexpected policy shifts, especially in the United States, have not traditionally been a serious concern. It seems that this is no longer true. Call it the “Trump effect.” For better or for worse, companies must expand their international risk management perspective to take a new and unique uncertainty into consideration.