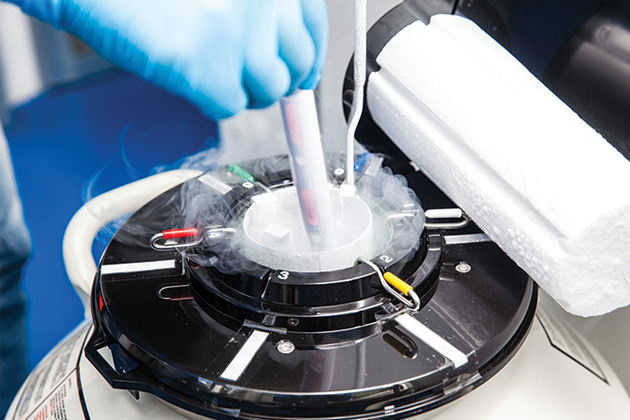 On the weekend of March 3, equipment failures at two unrelated fertility clinics in California and Ohio damaged or destroyed thousands of frozen eggs and embryos. At the Pacific Fertility Center in San Francisco, an embryologist checking on the cryogenic tanks that housed their specimens discovered that the liquid nitrogen level in one was seriously low, threatening the viability of its contents. (Liquid nitrogen is essential for keeping eggs and embryos properly cooled.) The embryologist was able to transfer the contents to a new tank, but thousands of embryos could have been compromised. At the University Hospitals Fertility Center in Cleveland, another malfunction caused temperatures to fluctuate in a tank, which would have set off a remote alarm system, but the system happened to be turned off, so no employees were notified when the temperature in the tank began to rise.

According to a statement released by the Pacific Fertility Center, the vast majority of the eggs and embryos in the lab were unaffected. The Cleveland facility was less fortunate, however. “We now believe about 950 of our patients were affected by the failure of this storage tank,” University Hospitals wrote in a letter to patients.  “The technical manner in which the eggs and embryos are stored in these freezers complicated our initial determination of how many patients and specimens were affected, and after review, we have determined that the total number of affected eggs and embryos for these patients is more than 4,000, not the estimate of 2,000 previously used. We are heartbroken to tell you that it’s unlikely any are viable.”

Patients affected by the malfunctions have filed lawsuits against both facilities. Experts believe that the failures were likely the result of human error and could have been prevented with better adherence to proper operational procedures, which is particularly important as the usage of these systems continues to increase. According to the Centers for Disease Control, there are 440 fertility clinics in the United States. The Society for Assisted Reproductive Technology reports that the number of patients rose from 475 in 2009 to 6,207 in 2015. Overall, about 20,000 women in the United States have had their eggs preserved.

The repercussions of cryogenic storage tank malfunctions are especially serious for fertility clinics, but apply in other medical settings as well, including blood banks, urology labs and hospitals that store stem cells and other tissue for research. Cryogenic tanks are also used in manufacturing. The process of shrink fitting, for example, can involve shrinking a machine part in liquid nitrogen before assembly so that when it heats up and expands, it creates a stronger bond.

Because cryogenic tanks are essentially automated machines, facilities can sometimes get complacent about their proper maintenance and operation, which can lead to problems. “They treat them like they treat their outside sprinkler system—they set it and forget it,” said James Wideikis, attorney at Much Shelist, P.C. “These tanks are complex. They have alarms, sensors, chips and circuit boards and you have to remember that, internally, there is a cryogenic temperature that is hundreds of degrees below Fahrenheit. They need to be maintained and monitored on a daily basis and there have to be policies and protocols.”

A cryogenic freezer is able to maintain temperatures below 150 degrees Celsius because it is essentially “a massive thermos with a vacuum around it that provides a gap so that ambient air cannot get in,” said Gregory Ginex, partner at Bollinger Connolly Krause LLC, who has been involved in court cases related to cryogenic freezer failures. If a vessel is older and has no autofill mechanism to gauge liquid nitrogen levels and refill it as needed, automated monitors and controllers can be installed that keep track of either the liquid nitrogen level or the temperature inside the freezer, letting the user know when it is time to fill the tank with liquid nitrogen.

Such features will reduce the risk of an unexpected malfunction, but like any machine, tanks will eventually fail. “Whether the vacuum seal goes or the controller goes, they won’t last forever,” Ginex said. “So you have to have protocols in place to be ready for that and a response for employees to take.”

Although there are no standard guidelines, he noted that redundancy, backup, maintenance and supervision are key. “You should know your tank and if you see that you have been going through more liquid nitrogen than normal, it might be time to call for maintenance,” Ginex said. “Whether it is your own maintenance or a third party, [cryogenic tanks] should be inspected and maintained at least every six months.”

After representing a cryogenic vessel distributor in a long-running legal battle, Wideikis knows firsthand what can go wrong. He recommends six key steps for any organization that is responsible for maintaining such containers.

First and foremost, organizations need a written policy detailing how often tanks should be inspected, and how often monitors will measure the liquid nitrogen level in the tank. Tank operators should keep detailed records of the amount of liquid nitrogen, the date and time it was checked and the serial number on the tank. “It could save you five or six years down the road if you end up in litigation,” he said.

Second, facilities should hire an outside vendor to come in twice a year to make sure all alarms are working, that tank filling cycles are operating properly and that the system is otherwise functioning correctly. “You wouldn’t drive your car for a year without taking it in to get checked, and this is far more important than a car,” Wideikis said.

Third, make sure the liquid nitrogen provider—which takes out the old tank and puts in a new one—sets the tank pressure appropriately. If the pressure is set too high, “you’ll have problems because it will blow the release valve and you’ll have liquid nitrogen spraying everywhere,” he said. “If it’s too low, you won’t get the proper amount of liquid nitrogen into the tank.”

Fourth, facilities should have a remote pager system attached to each tank. If it goes into alarm mode, the pager will notify the appropriate technicians before long-term damage can occur. “It could malfunction in the middle of the night and there might be an audible alarm, but if no one is there, what good will it do?” he said.

The fifth step is assigning accountability, as hospitals often use cryogenic tanks in multiple departments to store a range of material including stem cells and biopsy tissue. “They can hold many things, but if used in other ways, there needs to be a chain of command,” he said. If there is cross-use among departments, it is important that someone is designated as the accountable party.

Finally, he recommended that tanks be stored in a room specifically designed to hold them. They should not be in closets or spread out in separate locations, as is sometimes the case in hospitals. Users of these tanks should also have backup storage available in case of emergency.

With good risk management practices, system malfunctions like those in San Francisco and Cleveland can be prevented, thereby avoiding costly lawsuits, and more importantly, saving the priceless cargo stored inside.

The Benefits and Risks of Telehealth Services