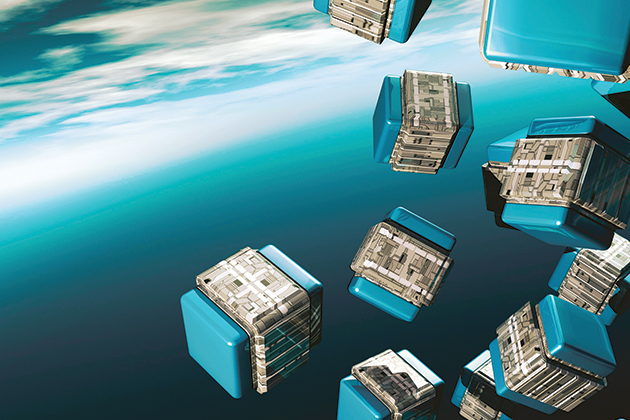 "Even with all our technology and the inventions that make modern life so much easier than it once was, it takes just one big natural disaster to wipe all that away and remind us that, here on Earth, we’re still at the mercy of nature.”
–Neil DeGrasse Tyson, Astrophysicist

In recent years, we have witnessed a technological revolution that is historic, impressive and even a bit overwhelming. From the introduction of smartphones to cloud computing to artificial intelligence, the frenetic pace of innovation has led to efficiencies that never before seemed possible. For businesses, the access to information is equally profound. Accurate and timely data facilitates sound decisions in terms of protecting assets, mitigating loss and meeting fiduciary responsibilities.

The technology sector clearly understands this need, and has responded by creating whole new communities comprising data scientists, programmers, software engineers and mathematicians. They collaborate feverishly to deliver data products that can satisfy the enterprise’s insatiable appetite for timely and accurate information. In some instances, inroads have been made. But in other areas, like the delivery of reliable and timely weather information, they have fallen short. The difficulty lies in the adage that the data is only as good as the source it comes from. And in this instance, the data sources—the large institutional government-based weather satellites—are fast becoming inadequate in the real-time world where businesses and risk managers must operate.

The problem with the handful of large weather satellites that continue to orbit the globe is not that they are poorly engineered or inherently bad; in fact, it is quite the opposite. Exclusively built by government agencies, weather satellites have been designed to last nearly two decades, conduct dozens of activities, and offer exquisite scientific outputs. But these requirements drive up the size, mass and cost of these satellites. It is this last issue—cost—that has made the current model for weather data acquisition insufficient for the commercial world’s needs. Many of these legacy satellites cost over $1.5 billion to build and launch, and as a result, there are very few of them in orbit. This limited number of large satellites in orbit can record and deliver data covering the world’s population centers every three to 12 hours, depending on the type of observation conducted. In areas that are considered less developed—such as Africa or Southeast Asia—weather data can be even more sporadic, with observation intervals stretched to as much as every 24 hours.

This lag in reliable weather data hampers businesses by severely limiting the resources they have available to make sound decisions. Hours-old weather information is of little use to airlines that must route flights, or maritime operators that are on tight schedules to transport freight and meet strict customer demands. It also hampers farmers who must plan planting, harvesting and selling strategies in alignment with weather to maximize yields.

There are financial issues related to legacy satellites as well. Governments that can afford them are increasingly unwilling to invest in replacement technology. Some government agencies, such as those in the United States, United Kingdom and European Union, have begun to show a desire to rely on the commercial sector to create solutions that drive down cost while improving performance and efficiency.

The business community has responded to the challenge by developing new satellite technology. While legacy satellites can be as large as a school bus, these new satellites—known as CubeSats—can be as small as a loaf of bread. Although they may seem to lack in size, they more than measure up in productivity and efficiency. Complementing the smaller satellites have been innovations in the miniaturization of instruments that enable these satellites to record and transmit vast swaths of data to a hungry market in near real-time. The variety of earth observation technologies being deployed is wide, but when looking for timely and accurate weather information, some are more effective than others. 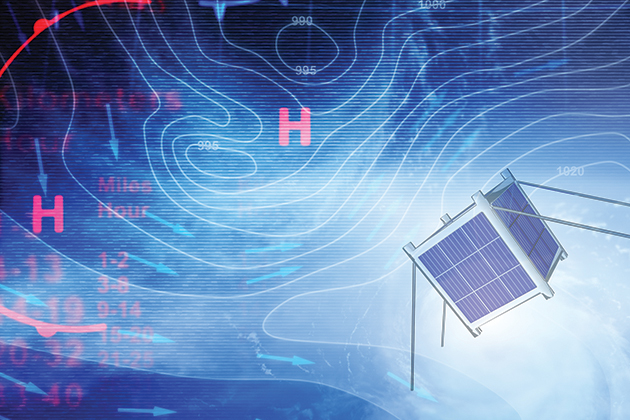 Microwave radiometry features enable CubeSats to gather weather data through clouds all the way to the ground, which is something that other satellite-based technologies cannot do. Other observation technologies such as visual imagery are ineffective over clouds, which presents a real problem when attempting to accurately gauge conditions during even moderate weather events, let alone a Category 5 hurricane.

The economics of CubeSats also pose another notable advantage over legacy satellites. A large legacy satellite can cost $1.5 billion to $3 billion or more from design to launch. Of course, these large systems carry multiple instruments and are designed for 15- to 20-year service lives—factors that contribute to the price tag. But there are only a handful of governments that have the financial wherewithal to absorb those costs, and even if they do, the scope of observation is not substantially improved. The laws of physics still dictate the territory that one satellite can cover in a defined period. By contrast, the cost of a fleet of CubeSats—which can number from 20 to 36 in a small constellation—ranges from $25 million to $40 million for the entire project.

While a single satellite can still only deliver readings for one location in six-to-12 hour increments under the best of circumstances, a fleet of CubeSats can deliver data as often as every 15 minutes. Additionally, CubeSats can be deployed into a range of different equatorial and polar orbits to ensure seamless global coverage. In areas that have been traditionally neglected by the large satellite operators, such as most of South America, Asia and Africa, businesses can access reliable weather data that may have a significant impact on their ability to manage risk in these regions.

While the economics supporting CubeSats could certainly be attractive for a range of businesses, for several industries like energy, agriculture and aviation, access to real-time weather information can mean the difference between safe, profitable operations and catastrophe.

For example, an energy provider in Northern Europe was recently confronted by unexpected ocean swells that delayed the transport of an oil rig to its drilling location in the North Sea. The swells were higher than operational thresholds allow, and came to shore 18 hours earlier than forecasted. While the weather data that the energy company received was from one of the more established and respected government-run weather bureaus in the world, the agency was unfortunately at the mercy of the satellites and sensors gathering the data. It lacked the advanced radiometry that would accurately gauge wind, temperature and moisture, and conduct calculations in real-time to pinpoint the time and direction of these dangerous swells.

Without access to this vital data, the company assessed weather conditions as too dangerous, and the subsequent delay led to missing its window to bring the rig online. The financial consequences were severe. An oil rig sidelined for 10 days translates into $15 million in lost revenue for the oil company, and a huge liability headache for the shipping company. Access to accurate and reliable data would have alerted the energy provider that ocean swells were imminent, and allowed the company to take the appropriate measures to transport the rig without missing the critical shipping window.

Satellites can also provide important data for the agriculture industry. Farming today involves a complex ecosystem that can span the global supply chain. From growing crops to raising livestock to producing and processing to retailing and consumer purchasing down-market, weather affects businesses in any number of ways. Without good weather data, businesses have little visibility into the key factors that affect productivity, like irrigation issues, soil moisture and projecting planting and harvest windows. Further, issues relating to commodity market fluctuations, time-to-market pressures, credit and finance, and regulatory compliance must also be taken into account.

Consider a rice farmer in Northern Thailand. The weather factors that go into producing this commodity are staggering: heavy rains can occur during planting or harvest, and excessive amounts of moisture can destroy a year’s worth of crops. Getting the timing right to plant or harvest rice in the tropics is essential, but without accurate data, it becomes pure guesswork. Extrapolate this risk across the entire supply chain, from the factories that process rice to the consumers who subsist on it. According to an Indian government report, just a one-week swing in planting windows can change rice yields by as much as 10%. The risk is hardly theoretical—low rice yields have caused economic depressions in a number of Asian countries.

The lack of reliable weather data is magnified further in countries like Thailand, which has historically been neglected by satellite coverage. CubeSats that can be programmed to observe these regions are a cost-effective way to mitigate risk. By increasing observational revisits and using improved radiometry to obtain better data, farmers, banks and government officials—and all participants in the agriculture ecosystem—have much better visibility into weather conditions and can make the necessary decisions to manage their portfolios accordingly.

In aviation, access to better weather data will make a marked improvement in economics, performance and safety. Better weather data means better flight planning, which allows for less head winds, optimal altitudes, fewer delays and happier passengers. From an operations perspective, avoiding turbulence and storms can decrease or eliminate the need to pull aircraft from service for additional maintenance and inspections dictated by regulations after experiencing moderate to severe turbulence.

This data is especially helpful in transoceanic flights. Even in an age with GPS, satellite imagery and reliable radio communications, an intercontinental flight often relies on a lot of guesswork when weather is concerned. The issue is that real-time ground radar is non-existent for oceanic flights. Flight dispatchers and pilots must rely on weather forecasts that may be delivered a few hours before a scheduled departure. For a flight from Atlanta to Tokyo, for example, the aircraft may not reach trans-Pacific airspace for five hours after take-off.

Particularly in a jet-stream-fueled environment, weather conditions can deteriorate quickly. An illustration of how hazardous oceanic flight can be occurred in June 2009, when Air France Flight 447 en route from Rio de Janeiro to Paris flew through the heart of a tropical thunderstorm. The storm formed well after the pilots received their weather briefings on the ground. According to a report from the Brazilian government, the pilots were over the Atlantic and unaware of the changing conditions when they flew blindly through the storm. Ice crystals formed, disconnecting the autopilot and putting into motion a cataclysmic series of events that caused the plane to crash, killing all 228 passengers and crew on board. If better weather data was available during the flight, disaster may have been averted.

Managing risk is predicated on evaluating sound, reliable and time-sensitive data. As legacy satellites are complemented by fleets of commercially viable CubeSats that have better resolution, expanded coverage areas and faster data processing, businesses will be able to make much better decisions to minimize the impact of weather on their operations, resources and products.
William Hosack is chief executive officer of Orbital Micro Systems.