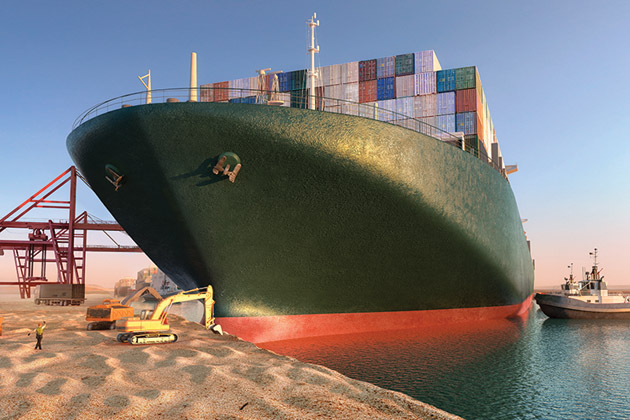 The blockage of the Suez Canal by the grounding of the Ever Given last month highlights the risks and liabilities to which those who ship goods are subject.

In the wake of the week-long grounding, legal proceedings commenced in London and elsewhere with various stakeholders vying for position to protect their interests and limit their liability. On April 8, the Suez Canal Authority barred the Ever Given from leaving port until $1 billion was paid for damages including damage to the canal, the substantial costs for the numerous vessels needed to free the Ever Given, the expenses for hundreds of workers toiling around the clock to extricate the ship, lost transit fees, and the corresponding dredging efforts to create the conditions needed to right the ship.

The ship’s owner, in its turn, made a claim of general average against Evergreen Marine Corp. (which had leased the Ever Given) as well as the cargo owners. The British International Freight Association (BIFA) issued a bulletin advising those with goods on board that they would be asked for an indemnity—a general average guarantee from their insurers—or else a cash deposit.

Cargo Insurance to the Rescue?

Many cargo insurance claims get paid without much fanfare. Many do not. Accordingly, it is important to protect your insurance rights as you would with any other line of commercial insurance.

First, it is important to provide written notice of insurance claims—even with something as well publicized as the Ever Given running aground in the Suez Canal. Too many insurance companies will not hesitate to seek a forfeiture of all insurance coverage benefits where they argue that notice was supposedly “late” or otherwise lacking—even if the underwriters know full well about the incident and the categories of loss.

Second, marine insurance policies often contain a shortened contractual period for bringing a lawsuit to enforce insurance coverage rights. While statutes of limitations applicable to causes of actions for breach of insurance policy obligations usually are denominated in years under the state and international statutes of most jurisdictions, many marine cargo insurance policies denominate their suit limitation clauses in much shorter durations—sometimes in months versus years. It is not uncommon to see a suit limitation clause as short as 12 months—and it is possible that some insurance companies will attempt to argue that a 12-month period begins to run from the date the cargo was supposed to be delivered. Even though insurance company conduct itself can preclude enforcement of such clauses (or other factors may weigh against strict application of such suit limitation clauses), it is best to err on the side of caution. While a year may sound like ample to time to resolve a marine cargo claim, sometimes it is not nearly enough time to do so given complications of the claim itself or insurance company claims-handling conduct. As such, these deadlines must be calendared carefully and conservatively.

Beyond these insurance claim basics, marine cargo insurance has unique and arcane aspects that must be considered by any policyholder seeking to protect its cargo shipments.

In addition to basic coverage for loss or damage to cargo, there may be important insurance protection under other provisions of the marine insurance policy. There is often coverage for policyholders’ “sue and labor” costs and “warehousing and forwarding” charges. Additional coverage can be available for loss or damage under marine extension clauses for claims involving deviation, delay, forced discharge, reshipment, “variation of the adventure,” and transshipment.

Finally, as BIFA points out above, many policyholders should have insurance coverage for general average claims. Such insuring provisions may cover the policyholder under clauses providing coverage for “general average and salvage charges according to U.S. laws and usage and/or as per foreign statement and/or as per York-Antwerp rules (as prescribed in whole or in part) if in accordance with the contract of affreightment.”

Whether policyholders were affected by the blockage of the Suez Canal or not, it is important to be aware of your insurance coverage benefits and the clauses that can be used by insurance companies to thwart insurance claims. Working with an experienced insurance broker in this area is particularly important given the arcane nature of maritime insurance generally.

Preparing for Biometric Litigation from COVID-19