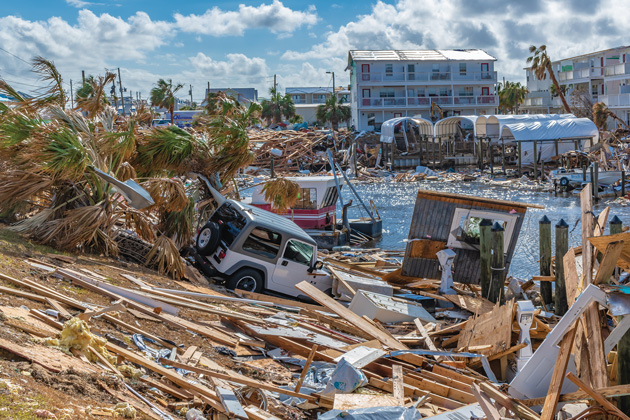 According to the National Weather Service, 2020 was the most active Atlantic hurricane season to date, with a record-breaking 30 named storms, of which 12 made landfall in the continental United States. These natural disasters accounted for billions of dollars in damage, and implicated thousands of insurance policies. Yet, last year’s hurricane season was largely overshadowed in the insurance industry by COVID-19, as pandemic-related losses led to thousands of claims, subsequent litigation and challenges to coverage.

Pandemic-related losses have exacerbated the hardening of the insurance market over the past few years, leaving policyholders facing pricing and capacity challenges and increased difficulty securing favorable coverage terms. Now, policyholders must deal with the prospect of large-scale disaster losses in an environment characterized by higher insurance premiums and more restrictive coverage for most insurance buyers.

Given these changes in the market and coverage, policyholders should review their property and business interruption policy language for key clauses that may preclude coverage or create confusion within the policy. As the 2021 hurricane season begins, companies should consider the following factors to mitigate exposure to natural disaster losses:

In litigation and other claim disputes, interpreting the insurance policy’s terms consistent with their “plain” or “common” meaning to an ordinary person is the accepted general standard. But alternative “plain meaning” interpretations of key policy terms can often lead to two vastly different (and costly) results. Further, policyholders cannot guarantee success under the second most significant rule of interpretation—that ambiguities will be interpreted in their favor.

For example, consider an insured textile company whose clients include major stores and other third-party facilities located throughout Texas. After a large storm, the insured experiences contingent business interruption due to the damage experienced by its client base. The insured has property damage insurance coverage with the deductible set at 5% of the time element values, determined by the experience of the business (i.e., revenue) for the prior 12-month period at the “locations” that were damaged. However, the policy does not define “locations.”

The insured submits its contingent business interruption claim based on the loss of sales it suffered in connection with each damaged third-party client location. For purposes of the deductible, however, the insurer asserts that the insured’s own property (i.e., the distribution center for the entire state of Texas) was the only insured property pursuant to the policy. Thus, the insurer says the time element values should be calculated using the full revenue of the insured’s insured properties, including those that were not physically damaged, rather than the insured’s particular revenue and experience with respect to each damaged third-party location.

If the insurer insists on including all of the insured’s distribution centers rather than using “time element values” based solely on the insured’s experience with each damaged third-party location, this could amount to millions of dollars in additional deductible costs. Indeed, the insurer’s deductible calculation could even be equal to or greater than the claim itself. On the other hand, if the insured’s interpretation prevails, then the insured would be responsible for a significantly lower deductible.

The insured is in a more favorable position when policy terms are susceptible to more than one reasonable interpretation because legal principles dictate that such terms should be construed against the insurer.  A large policyholder with a significant risk management department would be well served to consider any such language on an ongoing basis.

The Impact of Anti-Concurrent Cause Provisions

Policyholders should also note important case law that may affect coverage for natural disaster-related losses and how that case law relates to their policy language. For example, the Florida Supreme Court held in Sebo v. American Home Assurance Co., Inc. that the concurrent cause doctrine—and not the efficient proximate cause doctrine—applies “when independent perils converge and no single cause can be considered the sole or proximate cause.”

The “concurrent cause doctrine” allows for broader coverage by finding that coverage may exist where an insured risk is a concurrent, covered cause of loss. Concurrent causation is frequently beneficial from a court’s perspective for the following reasons:

A handful of states, including California, North Dakota, Washington and West Virginia, have ruled that ACC clauses are not enforceable, even if expressed unambiguously. Many states, however, have found them to be valid with the presence of clear language. For instance, Massachusetts, Pennsylvania and Texas have held for the insurer where the policy language explicitly and clearly contained an ACC provision in an exclusion and did not compete with an ACC provision elsewhere in the policy. Given that commercial property insurance policies vary significantly from one policyholder to the next, it is important after any loss for policyholders, their internal teams, insurance providers and legal counsel to determine if coverage exists by having a clear understanding of how various provisions (with or without ACC) interact with each other and any recent case law.

A dispute may arise if insured property is damaged during a named Nor’easter and one of the contributing causes of loss is wind-driven sleet, a term that the policy does not define. The ACC language in various provisions may compete with one another, creating a dispute between the insurer and its policyholder regarding coverage. In this hypothetical situation, the policyholder has a strong argument because: 1) the insurer has the burden of proving an exclusion that would be accorded a strict and narrow construction, and 2) the ambiguity created by the competing policy language must be construed in favor of the insured.

Although losses related to COVID-19 are currently the dominant concern in the insurance industry, policyholders should not lose focus on the impending hurricane season.  As the market continues to harden and insurers potentially seek to narrow coverage by altering policy language, policyholders should keep a careful eye on their policy language and question any unclear terms added to their policies.

Jared Zola is a partner in Blank Rome’s policyholder-only insurance coverage practice and has helped clients secure more than one billion dollars in insurance recoveries.