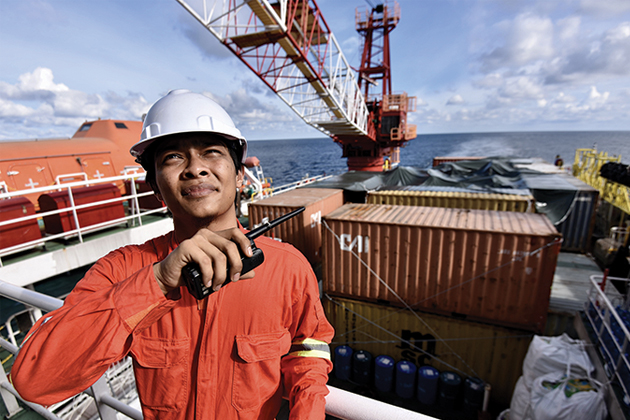 The international shipping industry is responsible for transporting around 90% of all international trade, which has rebounded from the sharp falls experienced during the early parts of the pandemic. Shippers are now busier than ever, but the global nature of the sector and the lack of spare capacity within it mean problems in one region can have ripple effects around the world. For example, a number of current issues like volatility in demand, constraints on capacity and the ongoing impact of COVID-19 are causing major congestion at ports and freight bottlenecks that are disrupting supply chains. Businesses in the shipping industry and the many that rely on it in their supply chains all need to be aware of the impact these risks could have on their operations.

On vessels around the world, a crew change crisis is having a major impact on the well-being of seafarers and on global supply chains. On any given day, nearly one million seafarers are working on some 60,000 large cargo vessels, according to the International Maritime Organization (IMO). Timely crew changes are vital to safe shipping operations, and seafarers spending extended periods on board ships are more at risk of mental health issues, exhaustion, fatigue, anxiety and mental stress.

However, pandemic-related travel and border restrictions, the widespread suspension of international flights, and vaccine requirements have significantly impacted ship operators’ ability to conduct crew changeovers. Between March and August 2020, only 25% of normal crew changes were able to take place.

As of July 2021, an estimated 250,000 seafarers remained on board commercial vessels, unable to be repatriated and working past the expiration of their contracts. A similar number are urgently needed to join ships to replace them. The shipping industry needs a global collaborative effort to get crews off ships as well as new measures to give crews some respite, such as adjustments to working hours.

With so many crew members stuck on vessels, there are also serious concerns for the next generation of seafarers. The maritime industry’s aging workforce has been an issue for years and has now reached a critical level as a result of the pandemic impacting training and development. With the economy and international trade rebounding and the demand for shipped goods surging, crews are under immense strain and the global shipping industry may see a shortage of seafarers if it continues to struggle to retain and recruit crew members.

A global vaccination program may help ease the crew change crisis, although the situation is complicated by the international nature of shipping. In March 2021, the International Chamber of Shipping warned that lack of access to vaccinations for seafarers is placing the shipping industry in a “legal minefield,” and could disrupt supply chains with cancelled sailings and port delays.

COVID-19 vaccinations could soon become a compulsory requirement for work at sea because of reports that some countries are insisting all crew members be vaccinated as a pre-condition of entering their ports. However, over half the global maritime workforce is currently sourced from developing nations, which could take many years to vaccinate. In addition, the COVID-19 vaccination of seafarers by shipping companies could raise liability and insurance issues, including around mandatory vaccination and privacy. That being said, the issue of required vaccinations for seafarers has existed long before COVID and a shot card for merchant mariners is nothing new in the industry.

The crew crisis is not the only risk challenging the global shipping industry. The blocking of the Suez Canal by the container ship Ever Given in March 2021 sent shockwaves through global supply chains that are critically dependent on seaborne transport. The six-day closure of one of the world’s busiest shipping routes caused a backup of hundreds of vessels and prompted many more to be rerouted or held in ports. The repercussions lasted for months, resulting in product shortages for retailers and delays in supply chains for manufacturers, as well as a logistical backlog for shipping companies and container ports.

The incident exposed potentially serious vulnerabilities in the maritime supply chain, demonstrating the potential for global disruption from chokepoints like major ports and shipping routes. It compounded delays and disruption already caused by trade disputes, extreme weather, pandemic disruptions and surges in demand for containerized goods and commodities.

At the end of 2020, many container ships had already been forced to queue at some of the world’s busiest ports, resulting in shipping companies cancelling sailings and rerouting vessels. The problem was exacerbated by a shortage of shipping containers in Asia, caused by increased demand and port delays.

In August 2021, one of the world’s busiest cargo ports was partially closed after a worker tested positive for COVID-19 in Ningbo-Zhoushan, China. This incident further highlighted the ongoing pressures on the global shipping industry as the world continues battling the pandemic. Officials estimated it could take up to 60 days for operations to return to normal once the port reopened and workers and maritime pilots could return from quarantine.

Potential claims scenarios resulting from delays and disruptive events like these include spoilage of refrigerated cargoes in container shipments, hull claims from bulk shipments where vessels face longer waiting times at anchor because of high water levels, and flooding during storms of stock in roll-on/roll-off shipments if primary storage areas are at maximum capacity.

Further adding to the list of recent incidents that continue to have ripple effects throughout the shipping industry was the August 2020 explosion at the port of Beirut in Lebanon. The disaster highlighted concerns over the storage of hazardous goods. Ammonium nitrate, which caused the explosion, is a widely used chemical and can be found in ports and warehouses around the world. However, it should be stored away from combustible materials and away from populated areas or critical services. Unfortunately, that was not done in Beirut, resulting in hundreds of deaths, widespread property damage and the total loss of at least three vessels.

As with the 2015 explosion in Tianjin, China, the tragedy in Beirut also highlighted the concentration of risk in large ports. Beirut is a major gateway to the Middle East, processing around two-thirds of Lebanon’s external trade. Meanwhile, the EU, United States and China have billions of dollars of trade flowing through their ports every quarter.

Such events in a busy port can have huge consequences and magnify the weak links in supply chains. Moving forward, these incidents illustrate the importance of developing more robust and diversified supply chains, and developing greater understanding of pinch points.

COVID-19 has had only limited impact on marine insurance claims to date. Hull insurance has seen little direct impact, marine liability insurers are expected to face passenger liability claims from cruise ships, and cargo insurers have seen an uptick in perishable goods claims. Pandemic conditions and the surge in demand for shipping have put shipyards under pressure and created a shortage of available shipyard space. On top of that, the cost of hull and machinery claims has increased due to delays in the manufacturing and delivery of spare parts.

As in many other sectors, the pandemic has created an environment of elevated risk for the shipping industry, forcing it to operate under extremely difficult circumstances. For the foreseeable future, enterprises should be aware that COVID-19 measures at ports, crew fatigue, disruption to maritime supply chains, and overall surges in demand for shipping will continue affecting risk exposures and impacting businesses and consumers worldwide.