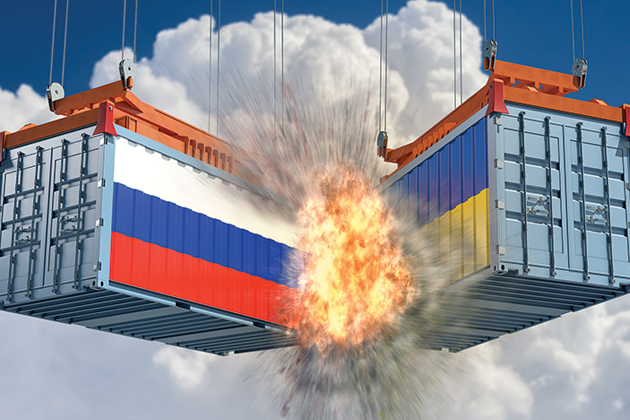 In addition to the tragic human toll, Russia’s war against Ukraine has also caused widespread disruption to global shipping, and is exacerbating ongoing supply chain disruption, port congestion and crew crises caused by the COVID-19 pandemic. The shipping industry has been affected on multiple fronts, with the loss of life and vessels in the Black Sea, disruption to trade with Russia and Ukraine, and the growing burden of sanctions. The industry also faces challenges to day-to-day operations, with knock-on effects for crews, the cost and availability of the bunker fuel that is used on ships, and growing cyberrisk threats.

So far, the biggest direct impacts of the war for the shipping industry have been on vessels operating in the Black Sea and/or trading with Russia. Ukraine’s major ports were closed due to the conflict and a Russian naval blockade. Hundreds of vessels were trapped in ports or at anchor while thousands of Russian and Ukrainian crew members faced an uncertain future, unable to leave vessels or return home.

The conflict is also impacting shipping far outside the conflict zone. U.S. and EU sanctions, in particular, pose a significant compliance challenge for shipping companies and insurers. Many western companies have voluntarily opted to cease trade with Russia, creating a complex and uncertain legal situation for contracts, including insurance. A prolonged conflict is also likely to have deeper economic and political consequences, potentially reshaping global trade in energy and other commodities. An expanded ban on Russian oil will push up the cost and availability of bunker fuel and potentially push shipowners to use alternative fuels.

As of early July, marine insurance losses from the war in Ukraine have been limited, although the ongoing conflict is likely to create uncertainty and legal questions for affected hull and cargo policies as it continues to develop.

More uncertain is the potential for non-war claims in hull and cargo insurance from vessels caught up in the conflict. Marine insurance policies typically exclude the seizure of ships or physical damage caused by war or hostile actions, such as damage from sea mines or attacks on vessels. However, most prudent ship owners will purchase additional war insurance, which covers such losses for a limited period of time, typically seven days. Coverage for non-war related damage or machinery breakdown may still be available where insurers are not able to cancel hull and cargo policies for affected ships.

Given the legal and reputational risks, many companies—including insurers—have pulled back from trade with Russia. However, insurers will be required to honor valid contracts until renewal. That being said, the prospect of payouts is additionally unclear because insurers are not able to pay claims that are covered by sanctions, and certain claims have to be denied under sanctions and war clauses.

Shipping trapped or blocked in the Black Sea is a particular challenge. Even if safe passage is afforded out of the conflict zone, vessels may not feel confident in using maritime safe corridors or running the risk of sea mines. However, the longer vessels are trapped, maintenance and crew welfare become harder to sustain. Some crews have reportedly abandoned their ships in Ukraine due to security worries. Trapped vessels or ships affected by sanctions may suffer machinery breakdown or damage by fire, collision or grounding. Cargo in storage or in transit may be damaged or abandoned due to the conflict or if a vessel is trapped in port.

Claims that arise under hull and cargo policies that are not directly related to the war could be difficult to resolve, involving complex legal questions and policy interpretation. For example, sanctions may prohibit a portion of an insurance claim, but not all coverage. Claims involving trapped vessels could fall under hull ­insurance or war insurance, depending on the circumstance.

For both shippers and their customers, the war in Ukraine increases the already considerable strain up and down the supply chain. Coinciding with COVID-19 outbreaks in China, the war is compounding ongoing supply and demand pressures for shipping, which have resulted in port congestion, higher freight fees and longer transit times.

Russia and Ukraine are both key suppliers of grain, and a lot of grain exports coming from these countries have either been halted or redirected to surrounding areas. In an attempt to keep the supply chain moving, neighboring countries such as Romania and Bulgaria have issued public commitments about delivering Ukrainian products to countries that heavily rely on them.

The International Monetary Fund (IMF) has warned that the war in Ukraine will exacerbate already high shipping costs this year and could keep them—and their inflationary effects—higher for longer. The cost of shipping a container on the world’s transoceanic trade routes increased seven-fold in the 18 months following March 2020, while the cost of shipping bulk commodities spiked even more. Meanwhile, shipping cargo turnaround by major carriers has risen to 60 days from the normal 50 days. This means 20% more containers were “in shipment” than was the case in 2019, while 20% of the world’s 9,000 active container ships were currently sitting in traffic jams outside congested ports in late April/early May 2022. In addition, the average time that containers offloaded from ships sit on docks has risen to over seven days, compared to a pre-pandemic average of two days.

Inflation is also compounding supply chain risks. A few years ago, the cost of shipping one container from China to the United States ranged from $2,000 to $4,000. It is now $10,000 to $15,000 per container, which pushes up costs across the board. Higher freight rates and a shortage of container ship capacity are even tempting some operators to consider using non-container vessels to transport containers, which raises safety questions around stability, firefighting capabilities and securing cargo.

Ultimately, the war in Ukraine is the latest in a series of recent shocks that are forcing companies to reexamine the nature of their global supply chains. Many are rethinking previous “lean, low cost and just-in-time” strategies and seeking to source goods from multiple places in order to minimize shipment and production disruptions. Businesses need to strengthen their supply chains, and risk professionals should be keenly focused on helping their organizations increase resilience against various disruptive and shock scenarios.

Seafarers have always risked being collateral damage in any conflict, and sadly that is no different with the Ukraine crisis. The invasion also has ramifications for the global maritime workforce, which is already facing shortages after two years of the pandemic. Around 2,000 seafarers were thought to be stuck on vessels in Ukrainian ports when Russia began assaults against Ukraine. Trapped crews face the constant threat of attack, with little access to food or medical supplies. Tragically, a number of crew members have already been killed in attacks.

A significant proportion of the world’s 1.89 million seafarers originate from Russia and Ukraine. According to the International Chamber of Shipping (ICS), Russian seafarers account for just over 10% of the total shipping workforce, while another 4% are from Ukraine. With many direct flights to Russia suspended, and with fewer vessels calling at Russian and Ukrainian ports, seafarers from these countries may struggle to return home at the end of their current contracts.

Regular crew changes are required around the world to ensure the flow of seafarers is maintained. Last year, the ICS and shipping trade association BIMCO warned there could be a “serious shortage” of officers within five years if action is not taken to increase training and recruitment levels.

Western countries have introduced a raft of sanctions against Russian companies, banks and individuals since the invasion of Ukraine. To varying degrees, the United States, European Union and Australia have banned imports of Russian oil, gas and coal, while the EU also placed sanctions on Russian iron, steel, coal, cement, timber and luxury goods.

Reputation risk and the threat of further sanctions have led many companies and shipping groups to review their appetite for trade with Russia. However, supply chains in a number of industries, including automotive, electronics and agriculture, are reliant on raw materials and components from Ukraine and Russia, and some sanction regimes exempt certain products. Adding further complication and potential cost, many companies have entered into contracts with Russian companies that they are unable to cancel.

Violating sanctions can result in severe enforcement action, yet compliance is complex and evolving. It can be difficult to establish the ultimate owner of a vessel, cargo or counterparty. Sanctions also apply to various parts of the transport supply chain, including banking and insurance, as well as maritime support services, which makes compliance even more complex. The United Kingdom and European Union, for example, banned insurers and reinsurers from underwriting the Russian aviation and space industry.

To operate as successfully as possible amid the violence, uncertainty and disruption of the war, companies must anticipate many difficult decisions. Risk professionals in the shipping industry, as well as with the many companies that rely upon the industry, should expand their view of the risks posed by the conflict to encompass their entire supply chains for the foreseeable future.