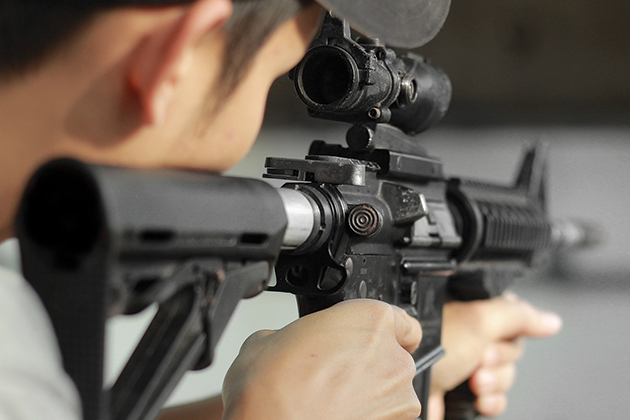 A terror attack or mass shooting can plunge organizations into a disorienting world of trauma, grief, media scrutiny and litigation threats. When an attack occurs, the leaders of private companies and government entities alike feel driven to deliver a caring, supportive response to the victims and survivors. At the same time, they are staring down expenses that can spiral into millions of dollars.

A specialized kind of named-perils insurance is helping risk managers deliver the response organizations need. Indeed, select insurers are seeing strong demand for active shooter policies, which came to the marketplace within the past few years amid rising anxieties from a seemingly endless stream of violent attacks.

The Rise of Active Shooter Policies

Organizations such as the FBI and the Gun Violence Archive have documented a rise in mass shootings in the United States in recent years. In the immediate aftermath of these attacks, employers, school districts and other targets faced a similar challenge. While enduring the painful process of recovery, they were also scanning their existing insurance policies and discovering that they lacked the appropriate coverage. As a result, they often had to bear the full brunt of the recovery-related expenses on their own.

Initially, coverage for active shooter and other mass violence incidents came in response to requests from larger school systems, health care companies, and the organizers of high-profile events like parades and festivals. Now, small-business owners, daycare centers, churches, car dealerships, and other local organizations have started seeing the value of these policies as well.

What Policies Can Cover

While general liability coverage applies to an expansive range of risks, it also has its limitations. By contrast, named-perils policies for mass violence explicitly state what they do cover. Of course, coverages have limits, but they address common expenses and scenarios that many general liability policies do not. Active shooter coverages can include:

Crisis management. Insurers can partner with expert teams trained to help insureds deal with media, reassure families, confer with top executives, and help the organization show the public it is handling the crisis with competence and compassion. Without expert guidance, it is possible that an organization’s suboptimal response to a crisis can create an entirely new crisis in its own right. The branding and public perception of an institution after an active shooter event can be difficult to recover from.

Victim counseling, medical, disability, funeral expenses and death benefits. Policies help organization leaders answer the question of who will help the victims by providing a supportive response to the trauma their employees and patrons experience.

Loss of attraction. When a mass attack stigmatizes a neighborhood or business district, insurance can help companies fill some of the revenue gaps. This applies even if the incident did not occur at the insured’s own business.

Property cost. Many organizations have experienced millions of dollars’ worth of property expenses from an attack due to the cost of structural security upgrades along with building closure, relocation or teardown.

Litigation. Policies can cover an expansive range of legal costs related to “duty of care” that might not be available under general liability insurance. According to Dr. Christina Marinakis, director of jury research at Litigation Insights, this is important because organizations today are being held to a higher standard of accountability than in the past  when it comes to providing public safety measures.

Prevention. Insurers can work with policyholders to figure out how to identify troubled individuals and intervene before it is too late.

Many active shooter/workplace violence policies contain exclusions that could prove costly in the aftermath of an incident. The following are some of the most common exclusions:

Employees. Coverage may only include guests or visitors and not  employees of the insured. Due to the nature of these events, insured persons should include employees, volunteers, students, guests and patrons.

Casualty thresholds. Some policies have a body deductible and coverage applies only after a certain number of people (usually three or four) have been injured or killed. Most active shooter/ workplace violence events involve less than three individuals, however, so it is important to ensure that your policy covers these incidents as well.

Vehicles. Vehicle attacks are becoming more common. Certain policies might rule out damage caused by a vehicle, such as an incident involving a vehicle ramming into a crowd of people.

Weapons. Coverage can be confined to firearms or bladed weapons and might not cover improvised explosives or ordinary items used for violent purposes, which, as the Boston Marathon bombing demonstrated, can be just as harmful.

While these exclusions are rare, with the evolution of coverage forms, policies still need to be reviewed carefully. More robust policies are available that cover all these risk scenarios to provide the proper coverage.

The Cost of Recovery

Lone-wolf violent attacks have garnered a significant amount of private and government attention and resources to provide vital attack analysis. For example, earlier this year, the U.S. Secret Service’s National Threat Assessment Center released its analysis of various mass attacks that occurred in 2017 in an effort to uncover clues that could assist in developing effective prevention measures.

These incidents are among the most significant financial exposures an organization can face. For example, the actions of the single assailant in the 2007 Virginia Tech shooting produced an estimated $48.2 million in litigation and recovery costs. And it cost $50 million to build a new Sandy Hook Elementary School in response to the 2012 attack.

In Florida, Broward County spent $1.2 million after a 2017 lone-wolf shooting at Fort Lauderdale-Hollywood International Airport. The Sun Sentinel reported the county’s spending included $562,000 to reunite travelers with their luggage, $270,000 to replace carpets and tiles at the shooting site and $314,700 for an assessment of the county’s handling of the crisis.

The combination of litigation costs and direct recovery expenses can financially devastate smaller organizations. Larger entities like corporations and universities may have more resources, but they still must reallocate funds toward recovery and away from other critical needs.

Thus, risk managers need to carefully assess their organization’s ability to withstand a violent attack and help the victims heal from the damage in order to determine if active shooter and workplace violence insurance is worth exploring in order to help mitigate these risks.
Paul Marshall is program director of active shooter/workplace violence insurance programs at McGowan Companies.