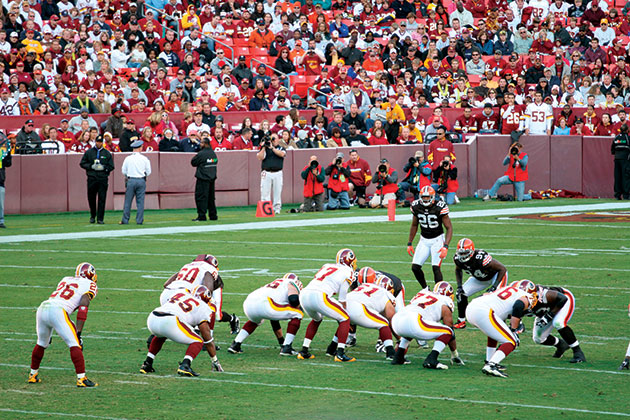 By the time you read this, the NFL season will be well underway. And if there is any justice, the football gods will have relegated the Washington Redskins to last place. Mind you, I never had any special hatred for the Redskins. In fact, despite their racially insensitive team name, I have rarely given them much thought. No, I take issue with their business practices-namely, their proclivity for suing their fans.

According to a story that appeared in the Washington Post in September, the Washington Redskins organization does not take kindly to people that want to back out of their season ticket contracts. In fact, the organization has been known to take legal action against fans for defaulting on these multi-year contracts, seeking judgments that reach tens of thousands of dollars. In one case, the Redskins sued Pat Hill, a life-long Redskins fan and season ticket holder since the 1960s, when she told the team she could no longer afford her annual $5,300 ticket payment after her real estate business dried up because of the collapse of the housing market. The Redskins took her to court for defaulting on her 10-year contract and won a judgment of $66,364 for payment for every season through 2017, plus interest, attorney fees and court costs, leaving the 72-year-old-grandmother heartbroken and close to bankruptcy.

Hill is not alone. The Post found that the team sued 125 season ticket holders over the past five years for a total of $3.6 million in damages, winning judgments totaling $2 million from 34 of the cases. And despite the Redskins' claim that this is common practice in the NFL, nine of the teams that commented in the article said they do not take similar measures against their season ticket holders.

Of course, the Redskins are well within their rights to take legal action to recover the money from defaulted ticket contracts. The fact is that these individuals signed a contract and should expect to be held accountable for its terms. The argument could be made that if these fans thought they would be unable to pay for the tickets, they should not have taken on the obligation in the first place. But in many cases, this isn't a case of buyer's remorse. Like Hill, these are people who have fallen on financial hard times and can no longer afford the luxuries they once could. It is not a question of their desire to pay, but rather their ability. In at least 125 instances, however, the Redskins don't seem to care.

It is a strange tactic coming from a team as wealthy as the Redskins. According to Forbes, the team is worth $1.6 billion, making it the second most valuable franchise in the NFL after the Dallas Cowboys. On top of that, the Redskins are far and away the most profitable team in the league, posting a $90 million operating income last year, a figure that is $20 million more than the next team and $60 million more than the league average-and a mere $89,933,636 more than the judgment against Hill. Obviously, this is not a team struggling to stay afloat. And with a season ticket waiting list reportedly exceeding 200,000 people, one would think that it wouldn't be too hard for it to find fans willing to pay for the defaulted seats.

After the story broke, it made the rounds of the sports blogosphere, where fan outrage about the Redskins' perceived greed and callousness seemed to force the team to reconsider its position. The next day the Redskins vacated the judgment against Hill and released her from her contractual obligation, although the team claimed that its actions had nothing to do with the bad press.

The Redskins' ticket fiasco can be viewed in a number of ways. On one hand, the team could be commended for quickly reacting to an unflattering story and taking steps to remedy the problem before it worsened. But on the other hand, why was such an unseemly policy in place at all? These days more people are watching the way companies operate and the stakes are that much higher. A local story can become national news in an instant and taking the sue-your-customers approach of the music industry or the nickel-and-diming approach of the airlines will only earn you the scorn of the very people you claim to serve and depend on to survive. There is a much better option: Just be human.