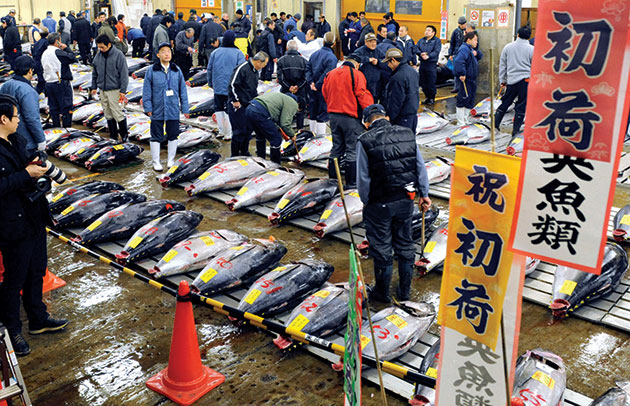 In January, a 513-pound bluefin tuna was sold for $177,000 in Japan. The prized fish, bought by two sushi restaurant owners at auction, is the most expensive bluefin on record since a 440-pound tuna went for $220,000 in Tokyo's marquee Tsukiji market in 2001. The reason these fish fetch such high bids is a combination of their high demand as a culinary delicacy and their growing scarcity. In the past half century, it is estimated that the bluefin tuna population has plummeted some 70%, as sushi, which began as a means to preserve food in Southeast Asia before becoming a cuisine staple in Japan, has evolved into a global phenomenon available everywhere from malls in Nebraska to the streets of Paris.

Many conservationists, including Dr. Sergi Tudela of the World Wildlife Fund (WWF), believe that a complete moratorium on commercial bluefin fishing is needed to avert complete species collapse, something the WWF has estimated could occur in the Atlantic and Mediterranean as soon as 2012 at current fishing rates. The fishing industry agrees that the annual catch quota must be lowered to let the population recover, but generally sees a ban as extreme.

In December, for example, the International Commission for the Conservation of Atlantic Tunas (ICCAT), the agency that regulates commercial tuna fishing in the Atlantic, set the 2010 industrywide quota at 13,500 metric tons. This is down significantly from the 2009 limit of 19,000, but-for the fourth year in a row-represents an unacceptable number for many environmentalists, who note that widespread catch-limit violations, misreporting and illegal fishing have led to an additional 20,000 metric tons of bluefin being caught in recent years.

The bluefin is far from the first ocean species to be threatened with population collapse due to overfishing. In 1992, the Canadian government made the difficult decision to shut down its Newfoundland-based cod industry, putting tens of thousands out of work overnight and decimating dozens of traditional fishing communities. Fisherman had been catching fewer and fewer fish for years, but the ban effectively punctuated what had once seemed impossible: the sea had run out of cod. Even with the ban, the species never recovered.

By contrast, the state of Maine has revived its famous lobster stocks in a way that was more acceptable to both industry and conservationists. Regulations were passed to prevent lobstermen from trapping males before they bred and females that were showing eggs, and strict trap limits were rigorously enforced. The changes were resisted by some, but many who had been fishing the region for decades and were all-too-aware of the ongoing depletion saw them as a necessary evil-a few years of lower-than-normal catches was better than long-term unemployment.

The Maine lobster industry is comparatively small, but there are similarities between the crustacean and the bluefin in that-unlike cod-they are both sought-after delicacies that return high prices even when yields are low. And the lobster population recovery goes to show that a balance between profits and protection is possible.

So while the ICAAT has, in the eyes of their critics, consigned the bluefin to collapse, a more important date for tuna stakeholders comes in March, when governments of the world will meet at the annual Conference of the Parties to the Convention on International Trade in Endangered Species of Wild Fauna and Flora to discuss the possibility of a bluefin fishing moratorium in the Atlantic and Mediterranean. The fate of the fish may lie in the balance.