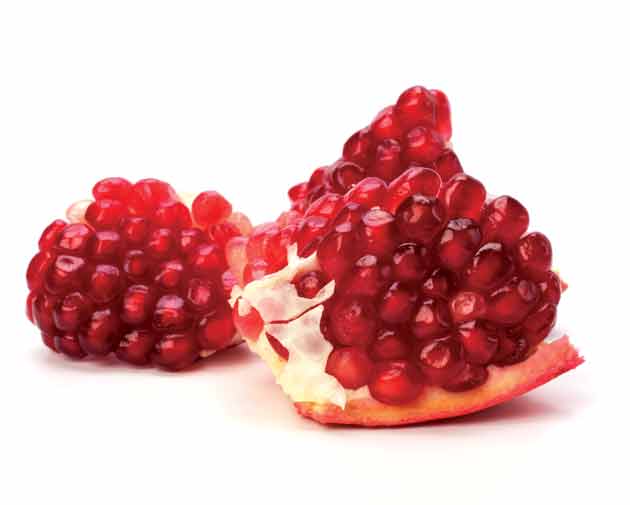 These days it seems like pomegranates are everywhere. You see them in salad dressings, iced teas, martinis and even skin care products. Pomegranate juices make bold claims that they are pretty much the healthiest things since oxygen. I never cared much for pomegranates myself, but I admit I was intrigued.

So when I came across some pomegranate juice the other day that said it would nourish my brain with all its omega-3s and antioxidants, I decided to give it a try. After all, I need all the help I can get in the brain nourishment department. One sip and I was hooked. It was fantastic. And given that November is National Pomegranate Month (of course it is), I'm stocking up with enough to fill my bathtub. The wife won't be happy, but with all this brain nourishment I'm sure I'll be able to convince her that investing in pomegranate juice is just the retirement plan we need. After that, I'm assuming my giant brain and I should be able to move on to simpler subjects like solving world hunger, stopping climate change and learning to fly. Word is pomegranates are just that good.

Or are they? In September, the FTC charged the makers of POM Wonderful pomegranate juice with deceptive advertising for making what it calls "false and unsubstantiated claims" that its product has "SUPER HEALTH POWERS!" and can prevent or treat a wide variety of maladies including heart disease, prostate cancer and erectile dysfunction.

According to the FTC, the studies that POM Wonderful cites as evidence for the health benefits of its products did not actually prove anything and even lacked basic elements of scientific studies that are essential to proving cause and effect, like control groups and sufficient sample sizes.

"Any consumer who sees POM Wonderful products as a silver bullet against disease has been misled," said David Vladeck, director of the FTC's Bureau of Consumer Protection. "When a company touts scientific research in its advertising, the research must squarely support the claims made. Contrary to POM Wonderful's advertising, the available scientific information does not prove that POM Juice...effectively treats or prevents these illnesses."

Earlier in the year, the FDA also took issue with POM Wonderful's claims and issued a warning letter to the company, pointing out that the health claims made by the company in its marketing established the product as a drug, and since these claims were unsubstantiated, POM needed to change its marketing immediately.

For its part, POM has stood by its research and insists that all claims are true. And now the company is suing the FTC for what it considers a violation of its First Amendment rights "to share useful and important information with the public." Of course, if the research isn't valid, one has to wonder how useful it actually is.

But you have to admit that the marketing has certainly done its job. Pomegranates are quite possibly the most annoying fruit in the world to eat and yet here we are debating its merits, not only as a tasty beverage but as a miracle cure-all.

Even if the company's claims prove to be false, it has been successful in at least raising pomegranate awareness. And I'm guessing that even if they get hit with FTC fines, POM will still come out ahead. Although the company doesn't release its sales figures, most reports put annual revenue at well over $100 million.

It's similar to when drug manufacturers are cited by the FDA for off-label marketing of their products. These cases frequently result in companies paying hundreds of millions of dollars in settlements. For instance, AstraZeneca and Novartis recently paid $520 million and $442 million, respectively, for just that reason. With annual revenue in the billions, these companies can afford to shrug off these relatively modest penalties every now and then.

But it's also a question of ethics. Just because you can afford the violations doesn't mean you should. Not every company has deep enough pockets to withstand the continued reputation damage that comes from putting profits before the health of your customers. The makers of POM Wonderful may believe in their product, but if it's based on faulty science, the company is doing its customers a disservice.

It's enough to leave a bad taste in your mouth -- although that might just be because I drink my pomegranate juice out of the bathtub.