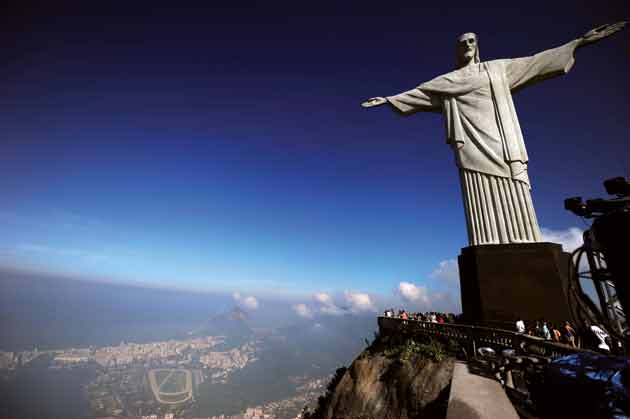 At a time when economic growth remains elusive for the United States and many other major world economies, Brazil is attracting attention from the global business community because of its strong growth prospects. The Brazilian economy, the largest in Latin America, is expected to grow by 5% in 2010, according to the country's central bank. That is almost twice the rate expected in the United States -- estimated at 2.6% for 2010 and 2011 by the Organization for Economic Cooperation and Development (OECD). One of the issues companies will need to consider before making any major investments in Brazil, however, is the impact of climate change on future operations.

A study by a consortium of 11 public and private institutions in Brazil released in November 2009 looked at the projected changes in Brazil's climate through 2050 and examined the implications for the country's economic environment. According to the study, "Economy of the Climate Changes in Brazil: Costs and Opportunities," some regions of the country are at increased risk of drought while others may experience an increase in floods and windstorms. In the coastal region, where Brazil's main centers of business and industry are located, rising sea levels pose a serious threat. These changes may also lead to a decline in reliable power generation and a decrease in available water resources.

Companies interested in doing business in Brazil should give careful thought to the selection of locations for their operations and plan accordingly to minimize problems today and in the future. And if the past few years are any indication, things may be progressing even quicker than expected.

Though climate change is often viewed as something that will not be a problem for many years, Brazil has already experienced a number of unusual meteorological events. In 2004, for instance, Brazil was hit by a hurricane for the first time on record. The storm destroyed 1,500 homes, damaged 40,000 others and cost the country $350 million. While hurricanes are not uncommon in the North Atlantic and the Gulf of Mexico, they are unusual in the South Atlantic due to the region's cool water temperature and wind shear that prevents storms from forming.

Even more rare, southern Brazil experienced two days of snow, an event that generated news headlines around the world. Other changes include an increase in the intensity of rain and winds in Brazil's southern region as well as strong rains this year in the northeast. In contrast, the country's central region has experienced a severe lack of rain.

In coming years, the climate change study predicts one of the most serious concerns will be for cities near the Atlantic coast, such as Rio de Janeiro and Porto Alegre, as well as other cities further inland, such as Sao Paulo.

Approximately $100 billion is at risk in coastal zones, principally in the metropolitan area of Rio de Janeiro, Brazil's second largest city, where the sea level is expected to rise significantly, according to the study. The city, which will host the final match of the 2014 FIFA World Cup and the 2016 Olympic Games, is located on a strip of Brazil's Atlantic coast in the southeastern region, making it particularly vulnerable to an increase in sea level. To protect Rio de Janeiro, the study predicts investments on the order of $1.5 billion will be needed.

Although the rising sea levels pose a serious threat to coastal cities, the regions that are most vulnerable to climate change are the Amazon and the northeast. In the Amazon, the study predicts rising temperatures will reduce the forest cover by about 40%. In the northeast, a decrease in rainfall will lead to a decline in the supply of water and power for the region. Agricultural production will decrease throughout most of the country as well, with the exception of sugar cane production in the south.

For businesses, the risks include the potential for an increase in fires due to droughts, an increase in the risk of wind and flood damage, an increased risk of disruption of energy supply, the potential for food shortages and an increased risk for business and supply chain interruption. The country has taken these risks seriously and taken action to address the problem. In 2009, Brazil promised to cut its greenhouse gas emissions over the next decade back to 1990 levels. This would represent about a 20% cut from the 2.1 million tons emitted in 2005, a reduction even more stringent than the goal defined by the Kyoto Protocol.

Businesses, for their part, need to take steps to manage climate change risk. Those with existing locations in Brazil should consider the risks of their sites and consider whether relocation would make sense. If not, businesses should prepare their facilities for the coming changes.

As it is, Brazil will have a hard time meeting the growing country's need for power, for instance. A decrease in rainfall will reduce the reliability of Brazil's hydroelectric power plants, making power supply even less reliable in the future. Businesses must invest in emergency power supply systems and use industrial heating equipment, such as boilers and furnaces, which can be powered by different types of fuels.

The risks from climate change may seem remote today, but the study makes it clear that change is coming and that it is never too early to begin planning for the future. By preparing now, companies can position themselves to take advantage of what this emerging market has to offer while reducing the potential for disruption as climate change accelerates.


Acacio Queiroz is president and CEO of Chubb do Brasil.