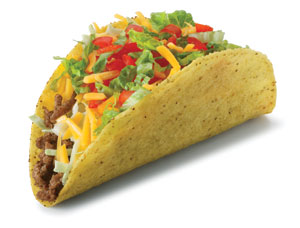 Taco Bell, like all fast food, has never been anyone's idea of five-star cuisine. In fact, the perception is usually much worse. For years, a popular rumor has made the rounds claiming that the chain uses USDA Grade D (or lower) meat in its products -- a quality rating supposedly below even that of dog food. This is untrue, however, since letter grades are not even part of the USDA's inspection process in the first place. Nevertheless, questions about Taco Bell's quality persist.

So it came as little surprise that a California woman would file a class action lawsuit against the chain for falsely calling its meat filling "seasoned beef." The deceptive advertising suit alleges that Taco Bell's "beef" is mostly made up of water, flavoring, additives and fillers with names like isolated oat product, soy lecithin, maltodextrin, autolyzed yeast extract, silicon dioxide, modified corn starch and sodium phosphate. Only about one-third is actual beef. The suit asks that Taco Bell label and promote its products more accurately (and fork over an unspecified award, termed "just and proper" relief, of course).

At first glance, it would seem that such a suit would be unnecessary. After all, everyone knows this isn't health food we're talking about. Strange ingredients have become more or less expected in something so tasty and inexpensive. That's why they call it junk food. Additives and fillers are simply the price we pay for our burrito and chalupa cravings.

Understandably, however, Taco Bell is fighting back. Company President Greg Creed released a statement calling the lawsuit "bogus and filled with completely inaccurate facts." According to Taco Bell, their seasoned beef is made up of 88% beef and 12% seasonings, water and other ingredients that provide taste and texture.  "We take this attack on our quality very seriously and plan to take legal action against them for making false statements about our products," said Creed. "There is no basis in fact or reality for this suit and we will vigorously defend the quality of our products from frivolous and misleading claims such as this."

Taco Bell even went so far as to take out full-page ads in major national newspapers that read "Thank you for suing us," jumping at the chance to set the record straight -- a bold move for a company that would seem to have long-standing public perception, not to mention possible evidence, working against them (the lawsuit referenced an ingredient label for "taco meat filling" that was basically a laundry list of non-beef components).

Taco Bell may be gambling with its reputation here, particularly if the case goes to court and the company is proven wrong, but it is a risk the company seems willing to take. Contrast this strategy with the one employed by Domino's Pizza. Popular opinion has always considered the quality of its pizza to be only marginally better than the box it came in. But rather than take a defiant stance like Taco Bell, Domino's chose to admit its faults and has undertaken a publicity campaign over the past year that has basically said, "We know our pizza was terrible, but we've changed and we want you to give us another chance." It's rare to see a company be so publicly self-deprecating, but it does underline the importance that smart companies need to place on protecting and enhancing their reputations -- even, and perhaps especially, if those reputations aren't all that great.

Taco Bell and Domino's could have just accepted their lots in life. Who cares if the world thought of them as purveyors of low-cost, low-quality food? They are still hugely successful companies with millions of loyal customers. But a good reputation is still more valuable than a bad one -- after all, it's not easy to attract new customers or retain old ones when you are thought to be substandard.

I, for one, haven't eaten Taco Bell or Domino's since my cast-iron-stomached youth and have little interest in doing so in the near future. But perhaps if word of their quality continues to spread, I might one day reconsider. That's the power of reputation -- it can even trump your own experiences.

So who's in the mood for a taco?

The Impact of Climate Change on the Reinsurance and ILS Market