We have all been part of brainstorming sessions that go nowhere. Half of the room stares off into space while the other half blurts out anything that pops into their heads. Ultimately, very little is accomplished. This should be of no surprise since many studies have shown that brainstorming as a strategy for idea generation is usually too unfocused to be as effective as most think it is. But people still need new ideas to make companies grow and flourish. 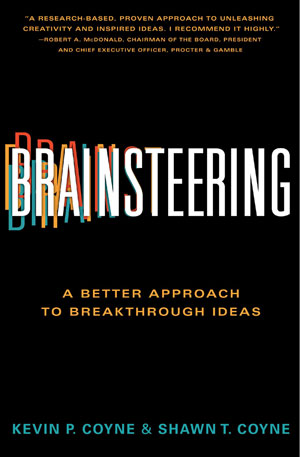 According to the authors, focusing on the right question is more important for developing new ideas than searching for the right answer. This is because the right question will focus thinking in a unique way. For instance, rather than asking a broad question like "how can we increase profits?" the U.S. Postal Service asked itself, "what is the biggest hassle our customers face when buying stamps?" When it determined that buying additional stamps to make up for postage rate increases was the largest burden, USPS created the popular Forever stamp, which ensures delivery regardless of the current rate.

The right question can even create whole companies and organizations. From the question, "how can we design a computer that will fit in the overhead compartment of an airplane?" came Compaq. And the question of "who would win in a fight: a boxer or a martial arts expert?" was the impetus behind the creation of the sport of mixed martial arts and the Ultimate Fighting Championship, which has become a multi-billion-dollar sports phenomenon.

Combined with the right process for focusing creativity, brainsteering hopes to turn organizations into "idea factories" that can generate a steady stream of new ideas -- a useful commodity in a fast-paced, globalized business world that is more competitive than ever before.