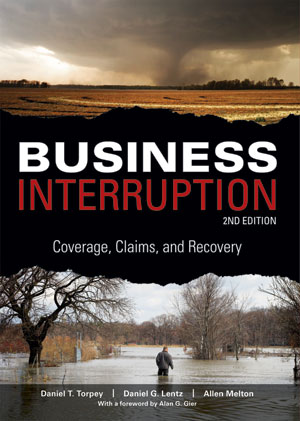 Rarely is the need for a solid business interruption plan more vividly demonstrated than when disaster strikes. As we have seen in the aftermath of the Japanese earthquake and tsunami, when Toyota and Honda were forced to temporarily shut down factories and component shortages threatened the availability of Apple's highly anticipated iPad 2, such disasters can tax the resources of even the most well-established organizations. So what can a company do to prepare for and deal with the inevitable forced interruption of normal business operations?

To help answer that question, authors Daniel Torpey, Daniel Lentz and Allen Melton, all of Ernst & Young, have released an updated second edition of their 2004 book Business Interruption. As the authors point out in the preface, a new edition was a necessity. Six of the 10 most expensive disasters in U.S. history and a major recession have all occurred in the last seven years, while increasing globalization has made the business world more complex.

In light of this changing environment, Business Interruption provides a thorough guide to all the nuances of business interruption coverage from its history and evolution all the way through what to do before, during and after a claim occurs. As such, it is a valuable and accessible resource for risk managers and insurance professionals of all levels of experience who want to gain a wider understanding of what is considered by many to be one of the more complex and critical coverage areas.

The new edition features expanded chapters and a host of case studies and claim scenarios that illustrate a variety of issues including the complexities of the claim recovery process, how to calculate a business interruption loss and common business interruption claims disputes. In addition, the authors have included new chapters on FEMA claims and the Public Assistance Act claims process as well as a look at the latest techniques for handling claims in a modern corporation, making the book a worthwhile addition to any risk management library.

How to Prepare a Business Interruption Claim