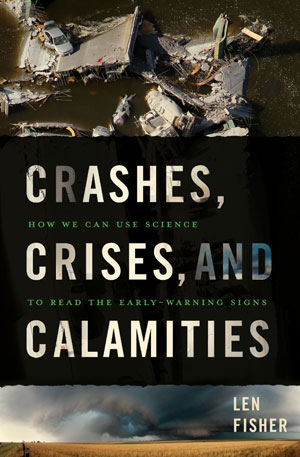 The last year has provided all too many reminders of just how little control man has over nature. Earthquakes have been the disaster du jour of late but we need only think back to 2005 to remember when hurricanes were the biggest scourge to hit the United States and the global insurance industry. No matter the type of catastrophe, however, improving preparedness is something that everyone can agree is a valuable goal. The only problem is that it can be difficult to prepare for things if you don't know they're coming.

In his new book, Crashes, Crises, and Calamities, Len Fisher sets out to make the warning signs more visible. In looking for the correct signs, Fisher explores many well-worn paths: seemingly clairvoyant animals, signs from the cosmos, the wisdom of oracles, computer models. He finds varying levels of insight from each of these and others, but his main focus centers on a few key concepts that he argues can predate any major calamity. Most notably, he sees an equilibrium in everything and suggests that concentrations of stress are the key indicators of an impending change.

In one case, he uses stories of frogs evacuating a vulnerable area before an earthquake. Another time, he references The Blues Brothers to explain Sir Isaac Newton's three laws of motion. Later, he nails home a point by recounting the tragic irony of the chief executive of Segway Inc. dying by falling off a cliff while riding one of the company's motorized scooters -- something that soon transitions into a lesson about the Icelandic volcano eruption last year.

If this all sounds disjointed, it is. But most of the time it actually works. I'm not sure that the ultimate lessons, and thus the reader's actual ability to predict calamities by reading early warning signs, really resonate. In that respect, Fisher has perhaps failed in his goal. What Fisher has put together, however, is an entertaining collection of interconnected threads, many of which weave together in an engaging, thought-provoking manner.