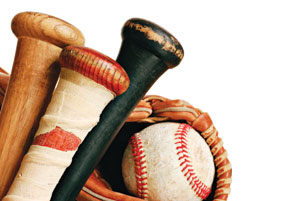 When I was kid, my dad would take me and a few select friends to a baseball game on my birthday. It was always one of the highlights of my year. Since then I've been to countless games in stadiums across the country and as far as I'm concerned, taking in a ball game is still one of the best ways to spend a few hours. But in all my years of attending games I have never caught a souvenir baseball. I haven't even come close. No home runs, no foul balls, no balls tossed into the stands by a generous player. Nothing. Like just about every fan at the ballpark, it is probably the one thing I daydream about the most.

So I understand how a terrible accident, like the one that happened recently at Rangers Ballpark in Arlington, Texas, could occur. During a Texas Rangers/Oakland Athletics game, Rangers outfielder Josh Hamilton tossed a foul ball into the stands in the direction of 39-year-old firefighter Shannon Stone, who was reportedly intent on claiming the souvenir for his 6-year-old son. Stone caught the ball but in doing so tumbled over the railing and fell 20 feet onto the concrete below. He was taken to a hospital where he was later pronounced dead.

This tragic incident was the third fall over a railing in Rangers Ballpark during the stadium's 17-year history. Last year, a man fell 30 feet from an upper deck in an attempt to catch a foul ball. He fractured his skull but survived. And in 1994, after the Rangers first home game in their new stadium, a woman toppled over an upper-deck railing while posing for a photograph. She fell 30 feet, landed on some empty seats, and suffered two fractured vertebrae, two broken ribs, six broken teeth, and injuries to her shoulder and leg. After the incident, team officials raised the railings from 30.5 inches to 46 inches in certain areas and posted warning signs throughout the ballpark.

Stone's death was the second fatal fall in a Major League Baseball stadium this year. In May, a man died after a 20-foot fall at Denver's Coors Field, home to the Colorado Rockies. Witnesses said he had been trying to slide down a staircase railing. And another near-miss made headlines only days after Stone's death when a fan nearly fell 20 feet after climbing onto a table to reach for a home run hit during the Home Run Derby at the All-Star Game at Chase Field in Phoenix. Fellow spectators, including his brother, grabbed him as he dangled over the railing and pulled him back to safety.

While accidental, these incidents could have an impact on safety at major league ballparks. The Rangers are planning to raise the height of all railings in their stadium to at least 42 inches and have already placed prominent warnings on the railings themselves. Major League Baseball urged all teams to evaluate the safety of their respective ballparks but stopped short of mandating specific measures since teams need to comply with local laws first. (Some teams may find these requirements lacking, however -- the city of Arlington only requires guardrails to be at least 26 inches high.) The league also has no plans to ban players from throwing balls into the stands.

This would seem to be the correct stance. Fans have come to appreciate players giving away baseballs -- a CNN poll conducted after the incident showed that more than 90% of fans want to see the practice continued -- and an isolated incident should not necessarily be a reason for a league-wide policy change. According to Rob Gorman, author of Death at the Ballpark, a 2008 book that chronicles game-related fatalities, there have been 22 fall-related deaths at major league parks since 1969 and other than this most recent incident, only one other fatality has resulted from a fan going for a ball in the stands. Statistically, this is not a widespread problem.

But there is always the possibility that a team could be found liable for damages if it was determined that they could have done more to prevent such an accident. Perhaps higher railings and encouraging players to hand the ball to closer spectators would be a small price to pay to prevent lawsuits, injuries or worse. After all, no free baseball is worth a life.