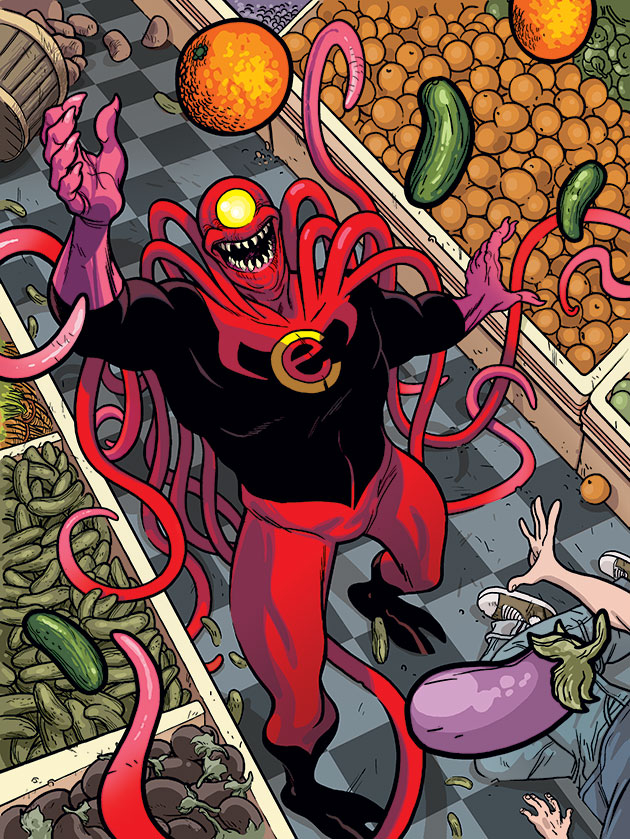 Who would have guessed that tiny little seeds could be so deadly? A single batch of seeds, specifically fenugreek seeds from Egypt, is the culprit in one of the world's most deadly E. coli outbreaks, sickening more than 4,000 people and killing 53, according to reports issued by the European Food Safety Authority.

Cultivated worldwide in countries including Nepal, India, Pakistan, Bangladesh, Argentina, Egypt, France, Spain, Turkey, Morocco and China, fenugreek is used both as a herb and a spice. In this case, a farm received the seeds in 2009 and they were planted with other crops including mustard and arugula sprouts. When the investigation began to focus on the farm, the sprouts were initially thought to be the source of contamination, but officials later determined that nearby fenugreek seeds were to blame.

As a consequence, many European countries placed a temporary ban on fenugreek seeds out of Egypt. To prevent further spread of the contamination, work continues to pinpoint where other seeds may have been distributed. But the trail is not an easy one to track. The lot in question consists of 15,000 kilograms of fenugreek seeds imported from Egypt to Germany going back to November 2009 and sold to 70 different companies, 16 of which are not even located in Germany.

While the whereabouts of more potentially contaminated seeds are unknown, one thing is certainly clear: we are very much a global marketplace. The interconnectivity that our global economy provides also presents many challenges, particularly in monitoring risks outside of our own day-to-day control. For one, it requires that businesses—especially those involved in growing, processing, packaging and selling food or beverages—develop greater awareness of where potential contamination risks lie, not only in their operations but also throughout their supply chain. Even more importantly, it requires businesses to build strong controls to protect their interests every step of the way, from their base ingredients to food processing to packaging protocols. Because a single seed can pose a threat to the company's products and reputation—or even worse, kill their customers.

A New Regulatory Environment
Businesses are not the only ones looking to control contamination risks. U.S. regulators are becoming more involved. The start of this year saw long-awaited changes in food safety regulation after President Barack Obama signed the Food Safety Modernization Act into law, marking the first major reform of food oversight at the Food and Drug Administration (FDA) since 1938.

The overhaul strengthens regulation of imported foods, puts a greater emphasis on predicting and preventing foodborne illness before it begins, and allows the FDA to issue mandatory recalls of products. Previously the agency's recalls were only recommendations. It also permits the FDA to suspend the registration of a food facility, effectively shutting it down, and requires food and beverage companies to produce written preventative control plans.

In the face of budget shortages and a still-fragile economy, however, putting these new regulations into practice may prove difficult. On the other hand, given continued deadly outbreaks like the recent one in Germany and the 2009 salmonella contamination linked to Peanut Corporation of America, which killed nine and sickened nearly 700 throughout the United States, the FDA may see an opportunity to prove its value to the general public before Congress takes a step back on its commitment to food safety to tackle budget concerns.

Whatever happens, this new law clearly recognizes risk management's importance and elevates the need for companies to invest more time and energy in precautionary efforts to protect public health. Given that companies only have two days to respond before recalls or suspensions are enforced, they must be able to act quickly.

This makes it challenging to realistically assess the nature and scope of an alleged issue. Recall costs can be enormous, both financially an reputationally, if not contained and handled correctly, so it is vital to swiftly provide data and credible support to the FDA to help isolate and segregate contamination—or, better yet, show that in fact there is no danger to public health. If a company cannot demonstrate where a contamination began and ended, chances are that a recall's scope will have to be broadened. Recalling a few weeks worth of product may be manageable for some companies, but removing an entire year's worth of product, which has happened in a number of cases in the United States over the last few years, could be financially devastating, not to mention reputationally ruinous. The Peanut Corporation of America, for instance, was forced to file for bankruptcy and close its doors permanently after salmonella contamination was found.

Having an appropriate traceability, recall and crisis plan in place is critical. At a minimum, companies are required by the bioterrorism act to have a traceability plan that adheres to the "one step up, one step down" principle so that the company can immediately know both the party the product came from and the next party to whom it was delivered.

To determine the true scope of a recall, companies need solid documented data to establish clear cut-off dates in production and schedules for batches and sanitizations. In addition, hazard analysis critical control points (HACCP) and standard sanitization operational procedure (SSOP) plans that focus on the most relevant food safety and brand equity risks can be helpful mitigation tools. Further proactive supplier approval and risk-based supplier management systems and protocols will help to manage risks coming from the upstream supply chain.

Food companies that manage risk effectively no longer view food safety as seeking compliance to a regulatory minimum standard. They get ahead of the game. They predict and prevent. That is exactly what Costco Wholesale, one of the nation's largest food retailers, did recently.

The company started requiring its suppliers of bagged produce (including salad greens, apple slices and baby carrots) to test for a broad range of toxic E. coli. Even more recently, they started requiring testing for the hybrid and virulent strain, called O104:H4, involved in the outbreak in Germany. According to Costco, the tests in isolation do not make the food safer, but they do help determine if the vendors' food safety programs are working. The company also plans to test all of the ground beef sold at its warehouse stores.

For years food companies have relied on certificates of analysis as a confirmation of food safety for their supplied goods. This global outbreak, like the 2009 Peanut Corporation of America recall, emphasizes the importance of knowing how safe ingredients from suppliers are and shows why many companies are taking a more heavy-handed, risk-based approach. They do not want to wait around and react to FDA actions.

New Testing for an Evolving Risk
Increased and changing regulation is not the only game-changer in town. Ongoing advances in food science are also at the forefront. And the list of potential contaminants that they are aiming to prevent from entering the food chain is also growing, with E. coli being a good example.

In the recent outbreaks in Germany and France, patients were sickened by a hybrid E. coli strain said to be extremely resilient, resistant to many antibiotics and "particularly sticky," which likely makes it able to cling to leaves, seeds and other crops in a way a common strain perhaps cannot. E. coli, like most bacteria, is continuously evolving. New strains evolve through the natural biological processes of mutation, gene duplication and horizontal gene transfer.

In response, many laboratories are hard at work developing a new test for this rare strain, which they hope to have available later this year. In the interim, companies like Beef Products, Inc., based in Dakota Dunes, South Dakota, are adding available tests to their safety regimens. The company recently announced that it would become the first processor to incorporate testing for six lesser-known strains into its food safety program. Currently, E. coli O157:H7 is the only strain classified by the U.S. Department of Agriculture (USDA) as an adulterant in ground beef, but other strains, known as "the big six," have emerged as food safety threats in recent years.

Beef Products said in a recent press release that its beef products will be sold or used for raw ground beef only if tests show no contamination for any of these strains. Each type has different characteristics that make developing tests for rapid detection a challenge, but companies like Beef Products are stepping up to adopt strict monitoring measures.

While this is a commendable safeguard, testing should mainly be used to verify how well other risk management steps intended to prevent contamination are working. It is the quality assurance and risk management efforts taken before testing that are the real key to keeping food safe. After all, predict and prevent is surely better—and likely cheaper—than test and dump.

Insurance Coverage for Food Risk Concerns
Fortunately, most companies in the food industry have solid quality assurance systems embedded in their day-to-day risk management efforts. As these recent events demonstrate, members of the food industry can be blind-sided from not only new strains of bacteria but issues that arise way up their ingredient supply chain as well. So while they can be very confident in their own quality assurance efforts, they must be equally confident in their suppliers' efforts. And with suppliers all across the globe, it is growing increasingly difficult to keep a watchful eye on everything at all times.

A few carriers have extended their product recall coverage to specifically address the fallout of government-mandated recalls, like those that new powers allow the FDA to enforce. The European Union introduced similar legislation back in 2006.

Policies have also been developed that specifically confront the risks companies now face from the Food Safety Modernization Act. If the pattern that emerged in the European Union after the introduction of similar legislation is anything to go by, companies can expect to see a spike in the number of recalls in the United States within the next few years, followed by a flattening out once the industry has raised its standards to meet the new regulatory bar.
In the event of a recall, a company will be judged by regulators, the media and consumers on its ability to manage such an event. Ultimately, a company's reputation lies in the hands of these three groups in a time of crisis. Recalls become situations that test customer loyalty and can make or break a reputation and therefore require much more than the financial protection afforded by insurance.

For this reason, today's available coverage also includes crisis management services and coverage for related expenses. Many companies have come under fire in the past for being unprepared, not taking any accountability, placing blame elsewhere or simply not getting their message across to the public effectively. So insurers are not only providing insurance coverage but loss prevention and mitigation assistance from recall, crisis, legal and public relations specialists as well as expert microbiologists and laboratory services. Through these offerings, they can attempt to help clients manage and limit financial losses, business interruption and reputational damage.

For the food and beverage industry, today's global marketplace offers considerable opportunities as long as its challenges are dealt with properly. Wise words from the Dalai Lama will help companies remember this key lesson. "In the present circumstances, no one can afford to assume that someone else will solve their problems," said the Buddhist leader. "Every individual has a responsibility to help guide our global family in the right direction. Good wishes are not sufficient; we must become actively engaged."
John Turner is North America product recall manager at XL Insurance, which represents the member insurers of the XL Group plc.