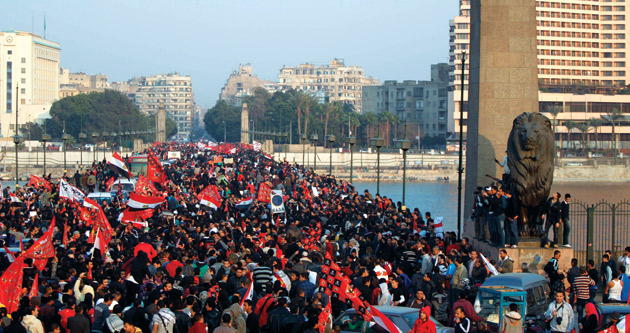 When 79 people died during an Egyptian soccer riot in early February, the world was once again reminded how much higher the stakes are off the field than on it. The day was meant to be one of joy for the Al-Masry fans whose team got a rare win over their rival team Al-Ahly, but it quickly turned to tragedy as armed supporters stormed the pitch to attack opposing fans and players.

It was a dark day for a nation still trying to create a new normal since the dictator who ran the country for three decades, Hosni Mubarak, was ousted last year. As is so often the case when sporting events turn to violence, a lack of security was blamed. The mob took over and there was no force to stop it. Over the years, crowds at sporting events have incited many riots and fiascos. The following are some of the most memorable.

It's unclear how many of the 25,000 fans in attendance over-indulged in cheap beer in Cleveland Stadium, but the sales promotion led to drunk, armed baseball fans standing toe-to-toe with bat-wielding players in the outfield. After littering the field with cups, batteries and golf balls all game long, one fan jumped onto the field and stole a Texas Rangers' player's hat. The player tripped trying to get it back, and his manager, believing he had been attacked, gave a now-infamous command to the other players: "Let's go get 'em, boys."

The team rushed the field and encountered some 200 fans reportedly carrying chains, knives and make-shift clubs created from shards of stadium seats. The hometown Indians players stormed the field -- bats in hand -- to defend their rivals. Mayhem ensued and fans were injured, but the teams managed a timely escape to the dugout. "That was the closest you're ever going to be to seeing someone get killed in this game of baseball," said Rangers manager Billy Martin after the game.

Along with a local radio station, the organizers of a Chicago White Sox/Detroit Tigers double-header offered tickets for just 98 cents if fans brought a disco record, which would be destroyed between games. Officials grossly underestimated people's hatred for this music genre, however: 90,000 people showed up to a Comiskey Park that held 50,000. Some climbed walls to get in and fans inside threw records around like frisbees.

After game one, a DJ detonated the record crates with explosives and a fire started. As he fled the field, fans rushed on. They rioted, setting more fires and tearing down the batting cage before Chicago cops cleared the wrecked field and arrested 39 people. The second game was canceled, and it remains the last American League baseball game to end in a forfeited.

When a concrete retaining wall collapsed, 39 died and some 600 were injured in what has been called "the darkest hour in the history" of European soccer. The stadium's foundation was strained when hooliganism took over the crowd. There was a fence separating the fans of the two clubs, Luventus of Italy and Liverpool from England, but the Brits circumvented the barrier to enter into their rivals' designated area. The Italian fans backed away and the wall collapsed when too many squeezed into a section not built to hold that much weight. English clubs were banned from participating in major Europe-wide competition for six years.

Authorities blamed police and the lack of security as "the main reason for the disaster" that echoed the Heysel tragedy. Thousands of late-arriving fans at a match between Liverpool and Nottingham Forest entered the stadium through a narrow tunnel connected to the "central pens," which were a staple of soccer stadiums to keep the opposing fans separated. As more and more poured in through the back, they pressed those on the front into the fence, crushing fans who died of "compressive asphyxia."

The crush killed 96 people and injured some 800. Only as fans started climbing out onto the pitch did the overwhelmed security officials begin to grasp the gravity of the disaster.

The Malice at the Palace

An NBA arena turned to chaos when Indiana Pacers forward Ron Artest ran into the stands to attack a fan after being hit by a beer thrown from the crowd. Other players followed and fans spilled onto the court as the Palace of Auburn Hills erupted into an all-out brawl.

Haymakers flew, a folding chair was thrown and a player brandished a dustpan as a weapon. The fan who threw the chair was charged with a felony (and briefly jailed), Artest received a year-long suspension, four Pacers were given probation on assault charges, and a Pacers announcer broke his back in the fracas.

The world was shocked when normally docile Canadians took to the streets of Vancouver after their beloved Canucks lost in the NHL's Stanley Cup Finals. Four people were stabbed, close to 150 were injured and more than 100 people were arrested as rioters looted, burned cars, smashed windows, overturned porta-potties and fought one another in public.