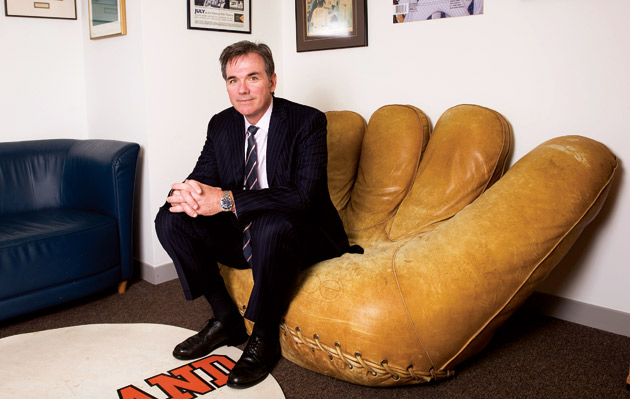 Billy Beane, general manager of Major League Baseball’s Oakland Athletics and the subject of the best-selling book and Academy Award-nominated film Moneyball, will deliver the keynote address at the 2012 RIMS Annual Conference & Exhibition in Philadelphia on April 16. Beane will discuss how his unconventional use of baseball analytics called “sabermetrics” helped turn a once-struggling baseball team into a World Series contender. (Arrangements for the appearance of Billy Beane made through Greater Talent Network, Inc., NY.)

RM: The “Moneyball” philosophy of taking advantage of market inefficiencies has become well known in both the baseball and the larger business world. So how do you stay competitive today when everyone has read the book, seen the movie and now knows your secrets?

Beane: Early on, there was a lot of low-hanging fruit for us, but right now the use of metrics and objective decision making has become not only more prevalent but probably commonplace. Any arbitrage that any business has usually doesn’t last too long. The biggest change was when a club like the Boston Red Sox started operating like some of the smaller market teams. When the big guys start operating like that it really starts to trickle all the way down.

RM: Can you still find and exploit the inefficiencies in the market?

Beane: I don’t think there’s any shortage of ideas. The challenge for us is that some of the ideas out there are somewhat capital intensive and require not only capital but time. Probably the biggest opportunity is in the medical field in terms of reducing injuries, predicting injuries and reducing the time lost to injuries. If you look at any sports team, one of the greatest predictors of a team’s success is a team’s health record. There’s a lot of unknowns out there, but there’s a lot of opportunity too. Part of the equation does require some capital though, which is something we’re short of.

RM: What are some of the ways you can address those medical issues?

Beane: Probably the best thing we can do is hire an actuary. The mysteries of medicine are not unique to our business. It sounds kind of crazy, but one of the things we can do is look at some of the things insurance companies are doing because that is their whole business and they’re probably better at it than we are in applying some of the same decision making, which is what we did when we used sabermetrics. It was essentially looking at a baseball team like an actuary would look at setting insurance rates, and some of the groundwork for things like this are probably already done by actuaries.

The information is probably out there. And what I mean by that is that an actuary will probably be a better advisor as to whether you should sign a player or not sign a player based on the information they have so that wouldn’t be a bad start. But even actuaries are expensive.

RM: What kind of role does insurance play in running a baseball team?

Beane: About 10 years ago, we’d insure player contracts. What’s interesting is that, for years, say you signed a player to a five- or six-year contract, you could get that entire contract insured. And I remember one time [our insurer] came to us and said they’re no longer going to insure contracts for longer than three years. After three years, they need to be underwritten again. And my assistant and I said, “that’s an insurance company telling us that it’s not a good idea for us to sign players beyond three years.” And there were a lot of exemptions as well in terms of pre-existing conditions. In other words, if a guy had a previous shoulder surgery, you might not get that covered. So that was basically them telling us these aren’t good bets and we’re not going to insure them for you.

RM: I would imagine it’s a difficult situation to look at dispassionately.

Beane: That’s the challenge. We all have visceral reactions to our favorite players—even if you are an executive.  And it’s exponentially greater if you’re a fan who could care less [about the insurance issues]. That’s the last thing you want to hear. Nobody wants to hear that you didn’t sign their favorite player because an actuary told you it wasn’t a good idea. But the fact of the matter is, [teams] are big businesses and if they are going to exist and stay healthy they have to be run like businesses.