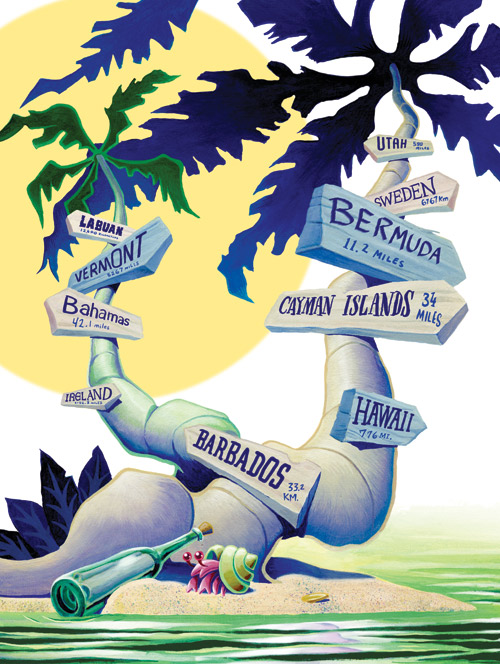 Years ago, captive insurance was typically misunderstood to be a sinister world of offshore financing befitting a John Grisham thriller. But today, captives are recognized as simply another mainstream tool that organizations can use to transfer risk.

Accordingly, not only have the number of captives spiked--there are more than 5,000 worldwide--but so have the number of domiciles. More than 30 countries now allow the formation of captives in their jurisdictions. In the United States alone, 30 states (with the addition of newcomers Florida and Oregon in July) and the District of Columbia have passed captive legislation, giving companies a wide range of choices in the market.

In order to understand some of the trends that are driving today's captive market, we spoke with Dennis P. Harwick, president of the Captive Insurance Companies Association (CICA). The organization, which provides networking, education and advocacy for the captive insurance industry, is celebrating its 40th anniversary this year.

RM: Now that the property/casualty insurance market is showing signs of hardening, what effect might this have on the captive market?

Harwick: In the old days there were a lot of people that thought that captives were driven entirely by the hard market versus the soft market. When the market got hard you had to create a captive.

To give you some background, I'd just become the CEO of the Idaho State Bar Association back in the mid-1980s, when the professional liability market collapsed. One day my phone started ringing and the conversation sort of went like, "I've just been cancelled--what are you going to do about it?"

The response was that a bunch of small states got together and formed--and we didn't know it was a captive, we were just looking for a solution because the coverage was either unavailable or available only at a price that seemed unreasonable--what is now ALPS in Missoula, Montana, which now writes in many states. It originally started off with just seven or eight small states trying to respond to this crisis where lawyers in small states couldn't get professional liability insurance. There was a classic hard market, or irrational market, situation where a captive was added.

What I see happening now is captives have matured and people understand--at least most risk managers know--that they have a number of benefits. I see the hardening of the market as a triggering event, and in talking to captive managers, I hear that they're getting lots of inquiries about, "OK, when the market hardens would that be the time for us to do this?" They know about captives now. And they see them as a response they can make in a hardened market. It is going to trigger a lot of people who have been thinking about a captive for the past year or so and have been wondering when does it tip the inertia from saying, "We thought this was a good idea for a long time" to "Now we have to do it because rates are going up."

RM: What are some of the current trends you are seeing in the captive market in terms of the types of companies forming captives, the risks they are looking to finance or the domiciles they are choosing?

Harwick: I don't know that I've seen anything where you'd say all of a sudden it is construction companies or health-care companies or whatever. I think it's very generalized now. I think we're in a wait-and-see period. Health care is part of that. An election coming up is part of that. I do think employee benefits are getting more and more discussion. There is a sense that it is getting closer to a critical mass that more and more people may look to use a captive for employee benefits. But there really is a sense that we are in a sort of wait-and-see, six- or eight-month period as things shake out both on health care and the election.

RM: Does this wait-and-see period in the United States coupled with the economic uncertainty in Europe make it advisable to hold off on establishing captives in certain regions?

Harwick: I would say maybe hold off on Europe with the whole Solvency II issue, which of course has been pushed back.

Regardless of what the motivations were at the time it was first proposed, there is a perception that imposing another layer of regulation on capitalization now, no matter how well-intentioned, is just simply bad timing.

But I do think, with Solvency II, people will have to ask themselves, "Do we really need to do work in the European Union?" If so, then Solvency II is going to be part of the formula. If not, they might take their captive somewhere else. Bermuda is interesting because they are working on equivalency, which I think they concluded--and probably rightfully so--was necessary for them to be a mainstream market. But it may push some captives onshore instead of offshore.

And this really is a speculative thing but, in the United States, there is an ambiguity in the Nonadmitted and Reinsurance Reform Act that has some captives wondering if they ought to be domiciled in their principle place of business as opposed to, say, a Vermont or another domicile that may have a good infrastructure for them. People keep asking, "How do we resolve this?" And the answer is that someone is probably going to have to litigate it. There just isn't a quick fix on some of that ambiguity, but I see a number of particularly young domiciles, Missouri being one, that say, "All you Missouri-based corporations ought to bring your captives back to Missouri and just eliminate that question." So you have the upstarts using that as a way to pry some business away from the more-established domiciles. There is logic to that but it will be interesting to see if that holds up over time.

RM: Domiciles like Utah and Delaware have seen their total captive numbers spike with the addition of more and more 831(b) captives. Do you see this trend continuing?

Harwick: We actually had some discussion on the 831(b) because there is a part of the captive industry that just sees them as an anathema. [They think] they're nothing but these pesky little things that are going to get the whole industry in trouble. I heard someone say they are going to go over a cliff at some point, we just don't know when.

RM: What is the concern?

Harwick: The concern is that there is a group out there that is overselling them as wealth-transfer devices. I've listened to a couple of these pitches and they really are fascinating, but they sell this as basically the way for closely held family corporations to transfer wealth from one generation to another. There won't be a single mention of insurance or paying claims. You just set this thing up as an insurance company and you pay all these premiums and they all go here and you can transfer the wealth. I was at one presentation where someone raised their hand and asked, "When do they pay claims?" And the presenter replied, "What do you mean, claims?" It's an insurance product so sooner or later there's supposed to be a claim.

That's one of the key tests the IRS is sure to apply. It has to be a legitimate insurance risk transfer arrangement, and there are people out there who are selling them and leaving that part out.

Those that have [legitimate risk transfer] probably will be fine. Those that don't have it will be challenged--and probably should be. Because some of these pitches just make you wish they weren't using the word captive insurance company in connection with it. Hopefully there will be a process where those that are involved with legitimate risk transfer can continue along. But there are some bad apples out there.

RM: So could there be a sort of bubble forming in the 831(b) captive market?

Harwick: Maybe a bubble in numbers. But I do think a lot of these get sorted out when they try to get them registered. Utah or Delaware are not going to approve some of these things as they've been sold. They will ask, "Where's the risk transfer?" You're insuring something and paying huge premiums for something that is never going to happen.

RM: To what degree do the larger, established domiciles like Bermuda, the Caymans and Vermont still shape the captive market and drive innovation?

Harwick: They're still the leaders, and in terms of premium written they're still where the innovations come from. Their influence is obviously challenged just by the sheer math of [how many domiciles exist]. As of July 1, Oregon and Florida have enabled legislation. The reality is that unless there is the political willpower to really devote the resources to creating a captive-friendly and a captive-skilled regulatory environment, that may not mean anything.

The fact is, people can look around. Florida and Oregon are good examples--if you have a company based in that state and you have a captive law on the books in that state, I think you are going to first look to see if that is where you ought to go.

Before, when only, say, 15 or 16 states had the laws on the book and only five or six were really doing it, and you weren't in one of them, you really had to go elsewhere. There's definitely a broadening in options for companies and they are going to talk to some of these places.

I'm occasionally asked, "Shouldn't you try to do something about reducing the number of domiciles or discourage the number of domiciles because it will dilute the talent pool?" And my response is that the big picture is that this isn't a little alternative market anymore. It's a maturing part of the market, and a rising tide floats all ships. You really have to take the larger view. I know there are people who have interests they would like to protect but to the extent that captives make sense at a philosophical level, they make sense no matter where you are. The market will decide.

What Does the NRRA Mean for Captives?