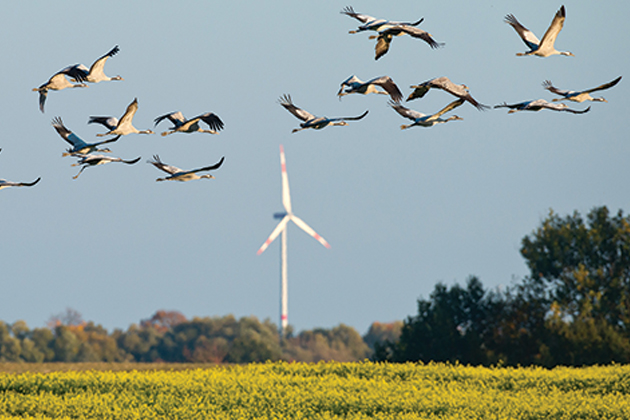 With new federal goals to generate 20% of electricity from renewable energy by 2030, the number of wind turbines in the United States is expected to increase dramatically. In 2009, there were about 35,000 wind turbines in operation, representing more than 25 gigawatts (GW) of installed capacity. By the end of 2012, there were 69,000 units. To meet the goal of 300 GW of production capacity by 2030, the American Wind Energy Association (AWEA) reported that 100,000 turbines will be needed.

While wind power is considered clean energy-safer for the environment than alternatives such coal, oil and natural gas-it is not without its own risks. For one thing, wind turbines in these anticipated numbers are expected to cause drastic changes to the landscape. The projected growth will require almost 20,000 square miles of land-greater than the combined areas of New Jersey, Connecticut, Delaware and Rhode Island-as well as more than 4,000 square miles of marine habitat, according to the American Bird Conservancy (ABC).

Some habitats in areas where wind farms would be most effective, both on land and at sea, are critical to threatened and protected animals and plant life. Wind turbines are, by necessity, built in high-wind areas. Yet these often coincide with the migratory routes of birds, including protected bald eagles, golden eagles and endangered whooping cranes. Birds passing through the rotor area of moving wind turbines could be killed or injured. In fact, numerous studies have found that high numbers of hawks, eagles, kestrels, owls and non-raptors are killed annually in turbine-related incidents. Many of these species are protected by federal and state wildlife legislation. The varied estimates of birds killed in these incidents are controversial, but according to ABC, about 573,000 birds and 888,000 bats die every year.

In response, the AWEA notes that, as sites and configurations are chosen based on new data, eagle fatalities are being reduced by about half. For example, older turbines that are shorter, more numerous and faster-rotating are being replaced with fewer, taller, slower-rotating turbines that pose less risk to birds.

Comprehensive pre-construction and post-operation studies are increasingly undertaken for wind projects. Until the legal requirements become clear, "developers bear a burden to determine what needs to be done to comply with the law even when a high priority is placed on minimizing any adverse wildlife impact," he warned.

Federal oversight of wind energy's adverse effects on birds and other wildlife has increased as a result of two recent developments: the first criminal enforcement action under the Migratory Bird Treaty Act (MBTA) and the pending "take" permit program under the Bald and Golden Eagle Protection Act. ("Taking" is defined as wounding, killing, molesting or disturbing eagles.)

In November 2013, the Justice Department charged Duke Energy Renewables Inc. for the death of 149 migratory birds and 14 golden eagles at two wind facilities in Wyoming. It was the first criminal enforcement action against the wind industry for avian fatalities under the MBTA. The action was taken even though Duke had promptly reported the fatalities to the U.S. Fish and Wildlife Service (FWS) and worked with the organization to reduce future fatalities. Duke was placed on five-year probation and must pay $1 million in fines. It is also required to implement an environmental compliance plan that could cost up to $600,000 per year, Ahrens said.

Going forward, the effect of the Duke settlement is still unclear, he said, but future enforcement against other wind developers appears likely, and more action will be necessary to mitigate any adverse impact to avian wildlife.

Wind turbine developers also have new options to avoid such penalties. On Dec. 9, 2013, the FWS issued new final guidelines extending the maximum term permits for killing or "taking" bald and golden eagles from the current five years to 30 years, as the life of a wind project typically extends beyond five years. The final rule became effective on Jan. 8, 2014.

To obtain an Eagle Take Permit, project developers must follow the new guidelines that include reducing take to the greatest extent possible and conducting adequate site monitoring. The FWS has not granted any such permits so far, but applications are pending and the first is likely to be issued soon.

Some environmental groups, however, consider the 30-year take rule unacceptable. The ABC said the number of birds taken annually by wind energy facilities could exceed 1.4 million by 2030 if there is no change in the U.S. energy policy.

A lawsuit filed by the ABC charges the Department of the Interior (DOI)with violating several protection statutes and asks that the five-year requirement remain. The move comes on the heels of a call by more than 70 conservation organizations for the DOI to identify locations for wind energy development, as well as regions that should be avoided because of wildlife concerns and sensitive habitats.

While debate over the correct level of government enforcement and regulation continues, impacts to bald and golden eagles, migratory birds and other federally protected species will play an increasingly significant role in decisions on siting, construction and operation of wind projects.