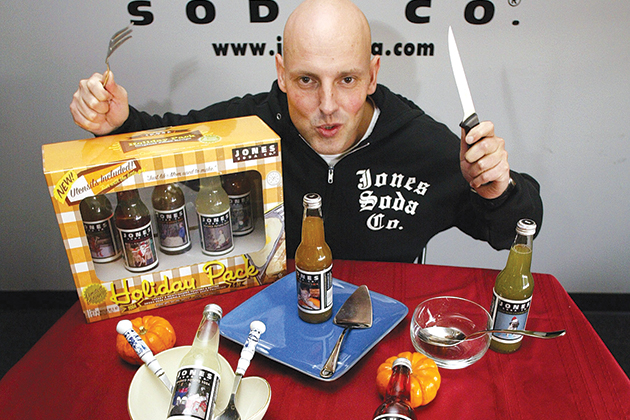 Years ago, while shopping at Target, I happened upon something amazing: a holiday pack of Thanksgiving-themed sodas from Jones Soda Co. This was no ordinary beverage selection—there wasn’t a cola or lemon-lime in the bunch. Instead, the mad scientists at Jones had ­created an assortment that included turkey and gravy, mashed potatoes with butter, green bean casserole, cranberry and fruitcake. Understandably, most would consider this an abomination, but as someone who has long been fascinated by strange junk food, I was in awe. There was no way these flavors would taste good, but I had to have them.

Once I got my prize home and conducted a taste test with my very reluctant wife, I found the flavors to be pretty much what you would expect. Cranberry and fruitcake were fine, turkey and mashed potatoes were awful, and green bean casserole was vile beyond description.

Over the years, Jones has come out with additional holiday packs to supplement their more traditional lineup, offering flavors like wild herb stuffing, dinner roll, pea, Brussels sprout and even antacid. The Seattle-based company also created a limited-edition pack in honor of their hometown Seahawks football team, including flavors like natural field turf, sports cream, dirt and perspiration. I haven’t tried these, but I can only assume they are what Satan serves to his dinner guests. I think it’s pretty great.

Of course, Jones isn’t the only company to gamble on novelty foods. For the past few years, Lay’s potato chips has held new flavor competitions featuring varieties like chicken and waffles, garlic bread, wasabi ginger and cappuccino. Meanwhile, KFC’s Double-Down sandwich, which substitutes chicken patties for bread, and Taco Bell’s Doritos Locos tacos, which use Doritos shells, have somehow become big sellers, despite sounding like the product of a stoner’s fever dream.

For those with less adventurous appetites—or just a healthy instinct for self-preservation—such strange foods beg a simple question: Why would anyone make these?

Not surprisingly, it’s all about the buzz. According to Bloomberg Businessweek, when PepsiCo tested a Doritos-flavored Mountain Dew on college campuses in November, this so-called “Dewitos” was the subject of more than 10,000 tweets in a single week. When cappuccino-flavored Lay’s debuted, they garnered more than 25,000 social media mentions. These flavors don’t necessarily generate positive feedback, however. For instance, one Twitter user suggested that the new slogan for Dewitos should be, “A great soda if you’re a raccoon with no tongue.” On the Colbert Report, Stephen Colbert came up with, “It’s like throwing up in your mouth!”

But, as the saying goes, there is no such thing as bad publicity. These companies bank on the fact that people are attracted to the weird. Plus, even if the new varieties don’t become big sellers, they will still draw customers to the soft drink aisle or the fast food counter.  The Jones holiday pack may have been mostly terrible, but since I like their style, I would definitely pick up some Jones root beer the next time I see it.

That said, buzz is only temporary. When Doritos Locos Tacos debuted in 2012, Taco Bell sold $1 billion worth in the first year and same-store sales jumped 13%. By the first quarter of 2014, however, store sales were down 1%. The thrill was gone.

The truth is that crazy gimmicks will turn heads, but when the novelty inevitably wears off, you need to have a strategy that amounts to more than turkey soda and Doritos in strange places if you want to have any lasting success. After all, what’s the use in attracting all that attention if you can’t keep it?

How the Dream Team Foreshadowed the Olympics' Sponsorship Controversy