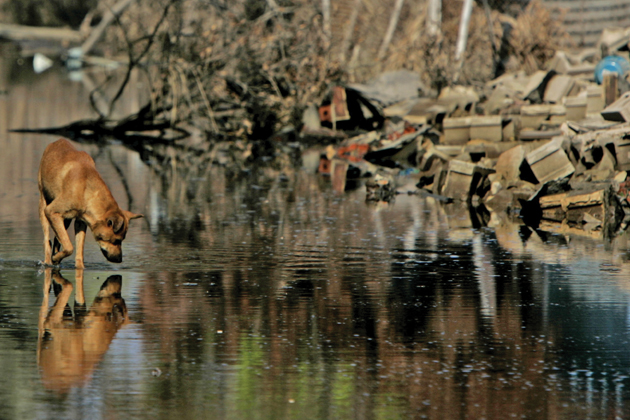 Despite the havoc Hurricane Katrina wreaked on New Orleans, many people refused to leave their homes, some because shelters would not meet one critical need: protecting their pets. Fueled in part by those who did leave their pets behind, hundreds of animals died in the aftermath and thousands were displaced, ultimately landing in animal shelters all across the country.

Public and private animal-based businesses also suffered. The city’s aquarium—considered the world’s best—lost the majority of its 10,000 fish due to power losses, generator failure and staff evacuation. The Audubon Zoo and its nearby research facility, however, weathered the storm, experiencing only the deaths of a pair of river otters and a raccoon and the apparent disappearance of a crocodile.  The zoo’s location on higher ground helped avoid flooding, and essential staff found shelter in the sturdy reptile house, utilizing stockpiled fuel, food and other supplies that were set aside in anticipation of the storm.

But it is not just individual residents or large-scale animal-based enterprises like zoos, marine parks, breeders or shelters that need to develop animal emergency plans. Warehouses keep guard dogs, universities and hospitals have research animals, agricultural enterprises keep hundreds of cows, sheep, and chickens, and police departments use horses and dogs.

In the wake of Katrina, developing emergency contingency plans that address the needs of animals is no longer an option. Spurred by the backlash against rescue efforts that left New Orleans’ animals—and some of their owners—to fend for themselves, Congress passed the Pets Evacuation and Transportation Standards (PETS) Act of 2006. The measure is designed to ensure that state and local emergency preparedness operational plans address the needs of individuals with household pets and service animals following a major disaster or emergency. It authorizes FEMA to provide rescue, care, shelter and essential needs for individuals with pets and to the animals themselves. The act also amended the National Response Framework to include language about the protection of animals and set up the means to fund a range of animal evacuation measures and sheltering through FEMA reimbursement. Emergency shelters that refuse to accommodate pets could lose out on federal funding—or worse. A number of lawsuits and petitions have been filed after disasters to revoke funding from public entities that would not offer emergency services to companion animals, despite federal regulations.

While advocacy groups and private citizens have lobbied for these measures out of concern for the animals themselves, doing so helps ensure that crisis response goes smoothly for humans as well. According to FEMA’s Animals in Disasters training manual, “Some people are more concerned for their animals in disasters than they are for themselves. This may impair their ability to make sensible decisions about their own safety and that of rescue workers.”

Further, failure to consider one of the most vulnerable and beloved populations in emergency planning and response is often seen as a poor reflection of preparation and response as a whole. “In disasters, some may use the way animals are cared for to measure the quality of human care provided by emergency management teams,” FEMA explains. “While the care of animals in disasters should never take precedence over the care of people, providing care for animals may facilitate the personal safety and care of a large segment of the human population.”

Since the PETS Act was passed, more than 30 states have adopted laws or publicized administrative plans that address disaster planning and pets. There is still significant work to do, however, as it is critical for all public jurisdictions, universities with animal resources, agricultural operations, and other animal-based businesses to have robust emergency preparedness plans in place.

Private businesses do not fall under the purview of the PETS Act or FEMA, but they also face serious repercussions if they fail to develop adequate plans for animal resources. Reputation damage and loss of income are notable risks, and both current and pending regulatory efforts directly address the issue. Anything that may interfere with the integrity of the food supply, for example, comes under the strict scrutiny of multiple regulators, including the USDA. Further, while it is currently pending, the USDA Animal and Plant Health Inspection Service published a final rule requiring additional steps in disaster planning as part of regulated industry’s duty of care. The Animal Welfare Act Contingency Plan Regulation requires all dealers, exhibitors, intermediate handlers, carriers, research facilities and any other regulated entities to develop a plan for emergency response and recovery to address the disasters most likely to strike their facility and to train employees on those contingency plans.

Private entities must also be mindful of the unique risks posed to their business. Clearly a grooming business or aquatic animal park may suffer physical damage and loss of income in the event of a disaster, but other animal-based operations also need to consider a range of possibilities for business interruption.

Consider the massive influenza outbreak that occurred several years ago. Many would argue that kind of a public health crisis does not involve animals. But if you operate a dairy farm, you have 10,000 cows that still need to be tended to. Milk still has to be processed daily, and feed must be moved in and out of the facility, regardless of whether employees are sick or contagious. Similarly, if employees are displaced in an emergency, the animals left behind still require aid and attention to maintain their health and that of the business.

At Texas A&M’s College of Veterinary Medicine and Biomedical Sciences, developing emergency plans that specifically address animals has become a key part of the school’s operations and the way it prepares vets. After Hurricane Ike took a toll on the state’s animal population in 2008, the college explored how to develop a robust, deployable team to treat animals impacted by emergencies in the field. The resulting Veterinary Emergency Team has now responded to a range of crises, from wildfire season to the fertilizer plant explosion in West, Texas. When nurse Nina Pham was diagnosed with Ebola, the team even managed the quarantine of her beloved dog, Bentley, who could have been a carrier due to exposure to the virus. 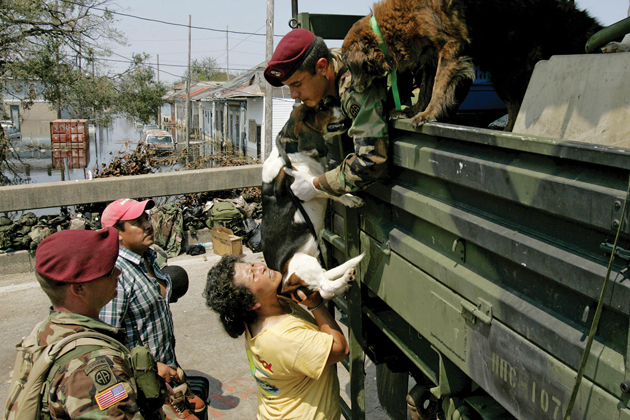 In responding to such crises, the school realized that emergency planning is a key skill often missing from traditional veterinary education. While doctors are taught how to respond to medical emergencies and know better than most the range of specific dangers a disaster may present, they do not usually learn how to plan to mitigate these situations. Senior A&M students are now required to do a clinical rotation on emergency preparedness and, in those two weeks, they actually develop full emergency response operations guidelines for counties, cities and businesses that have asked to participate.

While many of the elements of an animal welfare contingency plan may not surprise risk professionals with emergency planning experience, most may not understand the unique needs of pets or how to balance the demands for human and animal welfare. For example, familiar scents and landmarks are often altered after a disaster, so pets may become confused or easily lost, and downed power lines can be a hazard for people and animals alike. Much like with children and adults, disaster-related stress can impact the behavior of a pet, even provoking aggressive or defensive behavior that needs to be considered by owners and incorporated into preparation for first responders.

“Emergency managers may not understand animals, and animal people—whether individual pet owners or animal-related business—don’t really understand emergency response,” said Dr. Wesley Bissett, director of Texas A&M’s Veterinary Emergency Team. “Veterinarians can be a critical component of good emergency planning, as can industry representatives, when dealing with large animals. You need to gather a diverse group of people who understand the animal population in the community to come together with emergency managers to build a robust plan.”

The details of any plan depend on the location and type of emergency, but Bissett said the critical pillars are evacuation, rescue, emergency animal sheltering and veterinary medicine support plans. While these are sufficient for public entities, private businesses also need to draft guidelines for continuity of operations to mitigate lost business specifically related to animal populations. From there, emergency planning must delve into each component, identifying the people who will be responsible for each step and the resources that will be required for shelter, transportation, and funding for rescue efforts and medical aid.

Bissett urges emergency planners and risk managers to focus on writing standard operating guidelines, not protocols, as some elements of the plan need to stay fluid. “Particularly if you’re trying to write an all-hazards guideline, there can be so many differences that you need to be able to adjust for, depending on the situation,” he said. “For example, if you’ve identified a facility to use for emergency animal sheltering and the building is damaged in the disaster, changes in your approach will be required. But if you have those guidelines, it gives you the framework for how to build a successful response.”

Since disasters are inherently dynamic, every plan has to take into account the unpredictable nature of emergencies. “In every disaster or emergency, there are mistakes because the disaster is a little bit different than what you were anticipating when you made your plan,” Bissett said. “I don’t think you ever get it perfect. It’s a continual process of learning and understanding the things you didn’t consider when you made the plan or where the plan didn’t work quite right, and then adjusting for the future.”

To that end, he also urges regular revisions and revisiting of the plan. “Going through and updating your plan in the aftermath of an event is critically important, and looking at your plans on a regular basis and factoring in how your area has changed from a resource perspective is also essential,” he said. “One of the biggest mistakes that you could make is to get something written and not look at it for years.”