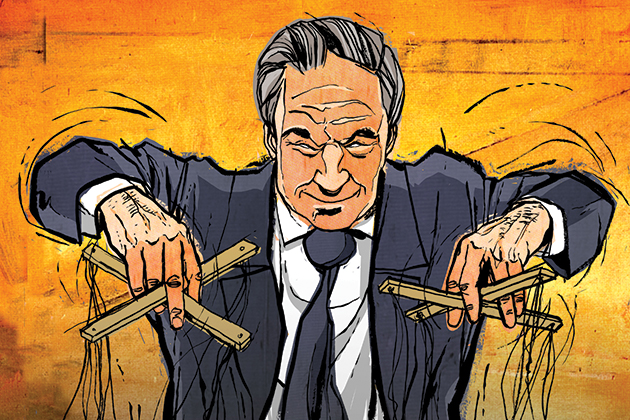 CEOs with extensive business and social contacts are often admired for their influence and expertise. Their network of connections is usually considered beneficial, both for themselves and the companies they helm. But is all of that really as valuable as it seems? In a merger or acquisition, some experts say those connections may actually do more harm than good.

Highly-connected CEOs “initiate mergers and acquisitions more frequently than CEOs with fewer connections,” said Tomas Jandik, associate professor of finance at the University of Arkansas’ Walton College of Business. “They can use their influence to pursue activities regardless of potentially negative impact for shareholders, and they tend to pursue acquisitions in deals more likely to destroy value.”

Last year, Jandik and his colleagues, Kathy Fogel of Suffolk University and Rwan El-Khatib of Zayed University in the United Arab Emirates, set out to determine whether CEO connections could be tied to merger and acquisition results. “Decades of social sciences research shows that [having extensive connections] affects an individual’s influence and power within any social network,” Jandik said. “We thought that studying CEOs’ centrality within the broader business executive network would help us to objectively assess bidder CEOs’ overall influence and power in M&A.”

In their study, “CEO Network Centrality and Merger Performance,” which was published in the Journal of Financial Economics in May, the researchers analyzed the networks of nearly 400,000 U.S. corporate officers and directors at S&P 1500 firms, using the concept of high or low network centrality in terms of the costs and benefits of social connections. “Bidder CEOs are important negotiators directly influencing the form and ultimate success of these deals,” Jandik said. “Previous finance research often identified M&A deals as value-reducing business contracts for bidder shareholders.” Yet it was not previously clear how an influential bidder CEO’s powerful network could have detrimental effects on deal-making.

Merger and acquisition activity is booming in the United States. Deloitte’s 2015 M&A Trends Report found that the value of mergers and acquisitions in 2014 exceeded $1.5 trillion, a 51% increase over the previous year. The trend has continued in 2015: Through the end of March, announced deals stood at $746 billion for the year—a 9% increase from the same time period in 2014. Further, 85% of the corporate executives surveyed expected accelerated or sustained M&A activity for the rest of 2015. The insurance industry alone has seen a flurry of high-profile deals in recent months, including ACE’s $28 billion acquisition of Chubb and Anthem’s $54 billion merger with Cigna.

Despite all of this activity, 90% of respondents said some part of these transactions over the past two years did not generate the expected value or ROI. This was due in part to uncontrollable factors, such as economic and market forces, but also due to forces that are in the company’s and, specifically, the CEO’s control, such as gaps in execution and integration and the failure to achieve synergies.

When deals go bad, however, the damage isn’t distributed as equally. “Deals initiated by highly-networked CEOs earn 3.4% lower post-merger returns than those initiated by the less-connected,” Jandik said. “Often, these deals result in greater financial losses for both the acquiring firm and the combined entity, but greater personal benefits to the well-connected CEO.” Bidder shareholders in his sample lost an average of 1.5% and frequently over-paid. Value destruction was greatest among the bidders led by the CEOs with the most connections.

Jandik’s team analyzed data from BoardEx, which provides biographical information on corporate officers and documents each organization’s connectivity in the marketplace, regarding M&As by S&P 1500 companies from January 2000 through December 2009. Their theory was that success, especially on the bidder’s side, depends on a CEO’s knowledge of the target company and its future prospects, plus that CEO’s ability to convince the board to close the deal. “The bidder CEO’s role is crucial because M&A deals have important monetary consequence,” he said. “Target shareholders usually benefit; bidder shareholders often lose money.”

What could motivate a CEO to pursue mergers or acquisitions that do not benefit the company? The researchers found that highly-connected CEOs who launched such deals tended to receive substantial salary increases and were 25% more likely to receive non-monetary awards, such as honorary degrees or “CEO of the Year” awards, even as their firms suffered negative returns.

High-powered CEOs acting on inside information are also more likely to sell their own shares, according to Jandik’s research. “Not only are shareholders being beaten by the action, the CEO has lowered his own number of shares before the merger,” he said. “That should be monitored by a risk manager.”

Jandik and his colleagues also examined interactions between CEOs and boards of directors during M&A-related activities. “It’s difficult for a board to monitor a high-profile CEO,” he said. Being well-connected could mean easier, better access to valuable information on potential targets, not to mention those CEOs are likely to have more powerful friends than lower-profile CEOs, and greater resources to rely on. Ultimately, connectedness increases the influence and power of CEOs. These factors can deflect internal and external corporate governance mechanisms that might prevent value deterioration.

“For example, despite stock value losses from an acquisition, well-connected bidder CEOs are unlikely to be dismissed by their boards of directors, and their own companies are less likely to be targeted for acquisition,” Jandik said. “Although boards are elected by shareholders to act as monitors of CEOs, highly-connected CEOs typically have more say in who will be on the board. Powerful CEOs like to appoint their friends.”

But the researchers could analyze only measurable outcomes of meetings. “Some highly-connected boards do monitor a CEO carefully, resulting in slightly less value destruction,” Jandik said. “For adopting a bad project—including an unfavorable M&A deal—less-connected CEOs are disciplined more often than the best-connected.” A board can fire the CEO responsible for a bad deal, but they are seldom significantly penalized for poor acquisition performance even though they may initiate more acquisitions and are associated with greater shareholder losses. “Few board members will go after a powerful CEO,” he said. “As a result, the most-connected are the least monitored.”

To counteract this, he recommends heightened scrutiny, especially during board selection. “New board members unconnected to the company could have previous ties to the CEO,” he said. “Pay attention to the bios of people who may join the board after a powerful CEO submits names. You may value board members who are completely unaffiliated with the CEO. You might also consider a new threshold for a merger, like 60% approval, not 50%.”

During the hiring process, Jandik advises checking on a highly-connected candidate’s activities in previous positions. “What kind of deals? How many M&As? What kind of value was produced or lost? Did the high connectivity benefit that employer?” he said. “Headhunters help a board compare candidates. Risk managers can check in along the way.”

The study results suggest a challenge unidentified in prior research: In the face of a highly-connected CEO powerful enough to pursue acquisitions, strong corporate governance has limited power to mitigate potentially value-destructive M&A activities.

“When senior executives are pursuing a deal, it’s an exciting time,” said Chris Henry, partner at Lowenstein Sandler LLP. “People are trying to get things done quickly. Having someone watching specific areas of risk is important.” He believes risk managers can provide valuable safeguards. Controlling information access is crucial, stressed Henry, who specializes in mergers and acquisitions. “Someone in an organization—especially on the selling side—should watch who has access to the online ‘data room.’ Everything in the data room should be pre-screened to see whether the company has a right to share that information.”

To control and regulate information flow, companies need to take their time. Company agreements containing confidentiality restrictions may require withholding particular information until needed consent is received, including in dealings with vendors and landlords, he advised. When multiple bidders pursue the same target company, it is essential to maintain confidentiality until later in the merger or acquisition process.

Anti-trust concerns also affect the flow of information between both sides. “Parties involved in a pending transaction are not permitted to act as a combined company before they are,” Henry said. For instance, if two competitors are asked by a potential customer to submit a request for proposal, someone at Company A may suggest submitting a joint proposal. “Anything reducing competitiveness in the marketplace, such as how we’ll price after we merge, is considered gun-jumping,” he said. “Planning about pricing is illegal. Colluding to set them is price-fixing.”

Pre-merger, defined boundaries must be respected. For example, can competitors attend an industry conference and conduct activities together before the deal closes? Henry recommended that investigating such questions be included on a risk manager’s checklist.

Henry recommended that companies form a “clean team” to separate external players, such as the sales force, from sensitive information. “The hard part is convincing executives that they have to do this,” he said. “After identifying what information is competitively sensitive, it’s easy to implement the two simple aspects: a technical barrier, and getting people to respect it—just create data room barriers allowing access only to the clean team.”

During the M&A process, senior executives should be aware of key items like agreements regarding disclosure to third parties such as lenders, equity holders, commercial counterparties, the public, and any parties with relevant contractual relationships. A risk manager can check on whether required timing and details are being followed.

The risk manager’s checklist should include regulatory filings since, even for two U.S.-based parties, foreign filings may be required. “Sufficiently large international sales can require an anti-trust filing abroad, or sometimes just notification,” he said.

Another major concern, especially with frequent data breaches, is analyzing the adequacy of cyberliability insurance for the combined entity. “It’s becoming more common to have a policy specifically covering that kind of problem, instead of just general errors and omissions coverage,” Henry said. “Your company may not deal with consumers, but you may be acquiring one with personally-identifiable consumer data. A risk manager can find out if holding consumer data is integral to the potential target company’s business. If so, check on appropriate amount and extent of cybersecurity or data breach insurance.”

When appropriate, involve internal or outside counsel with expertise in the type of deal being pursued. “Counsel should make executives aware of general boundaries, what they can and can’t do, gun-jumping, and what the grey areas are,” he said. “A risk manager can contribute best by being aware of them all.”

While the personal networks of CEOs can be very beneficial and provide an effective channel for information exchange, it is evident these connections can lead to abuse. “Highly-connected executives can choose to become entrenched and pursue activities regardless of potentially negative shareholder impact,”Jandik said. “This should be an important concern for corporate boards, especially in multi-billion dollar M&A deals.”
Carol Milano is a New York-based freelance writer specializing in science and health topics.

Why Do M&As Fail?

Cybersecurity Concerns in M&A Due Diligence