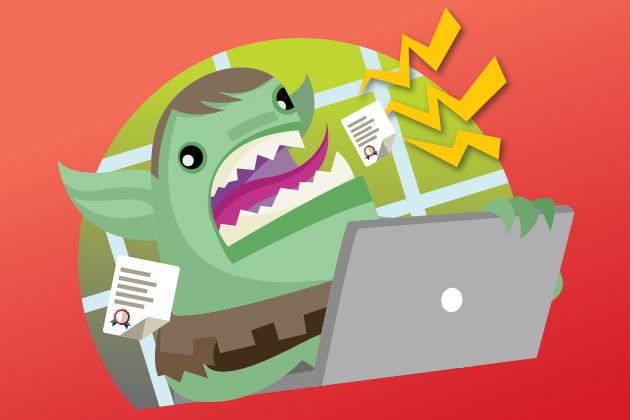 Every year, thousands of companies collectively spend more than $10 billion fighting and settling lawsuits brought by patent trolls, also known as non-practicing entities or NPEs. Patent trolls don’t limit their attacks to technology makers. Their model is based on demanding payment from any company that they believe is infringing a patent, and the patented technology in question can be in any product your company makes, sells or simply uses in the normal course of business.

So if your company has a transactional website, conducts e-commerce, uses a customer-facing smartphone app, provides in-store customers with Wi-Fi access or applies digital technology in almost any form, you may be a prime target for an NPE attack. In other words, tens of thousands of companies currently doing business have a reasonable risk of being sued by a patent troll.

It’s All About the Patents

The first step in countering the threat from patent trolls is to recognize that the heart of that threat is not really the troll, it is the patent. Remove the patent and you remove the risk of being sued for infringing it. After all, there is no viable tactic to make NPEs disappear—there are hundreds of active trolls and they have billions of dollars to buy patents to assert. There are, however, ways to eliminate risky patents.

This may seem counterintuitive at first. Most general counsel and risk managers assume that the only prudent response to being sued is to mount a legal defense. But history has shown that this is actually the least efficient and least effective way to react. The problem is that more than 90% of NPE-initiated litigations settle before judgment and, most of the time, the defendant ultimately agrees to pay for a license. “Fighting hard” does not result in a better price and does not dissuade trolls from attacking again in the future.

In short, fighting NPE litigation only wastes time (litigations typically last at least 12 months and often take years to resolve) and money (legal fees alone can easily reach six figures and settlement amounts are often inflated by the litigation process). The most logical way to reduce NPE risk is to shift your approach from reacting to an attack to preempting the source of the risk.

An Ounce of Prevention

This proactive approach can take several forms, from buying assets in the open market to purchasing insurance against the costs of NPE litigation. All can help mitigate your patent risk and dramatically reduce the costs associated with resolving infringement claims.

A logical and effective first step is to learn as much as you can about patent trolls by consulting online resources and reaching out to peer companies that have had firsthand experience with NPE assertions.

If you do receive an assertion letter, do not make a hasty decision whether to settle or fight in court. To move forward from the position of greatest strength, learn everything you can about the NPE in question, including its recent litigations, willingness to settle and past settlement amounts. Also be sure to contact your technology vendors to determine if they will indemnify your company against infringement assertions.

The most proactive strategy is for your company to eliminate problematic patents, but this may be difficult given the vast number of technology patents now in circulation—the U.S. Patent and Trademark Office has issued more than two million patents since 2000 alone. For those few companies with very narrow technology exposure, it might be possible to unilaterally clear some of the most threatening patents. But this is usually not a viable approach: It requires a top-notch intellectual property legal team to identify which patents to buy, and deep pockets to make acquisitions on a broad enough scale to be effective.

For the vast majority of companies, the technologies that they incorporate into products and use everyday are far too broad for such a strategy to be effective. A single smartphone, for example, incorporates thousands of patented technologies. Internet protocols and Wi-Fi-enabled technologies are now embedded in business applications ranging from handheld game systems to brick-and-mortar retailing to warehouse and logistics management.

This convergence means that companies, whether peers, competitors or even those across different sectors, have shared exposure to different types of patent risk. The fairest and most effective strategy, then, is to share the cost of reducing that risk. Clearing a single portfolio by acquisition can eliminate the danger of an NPE suit for dozens of companies. Purchasing that portfolio as a group ensures that all parties share not only the benefit, but also the cost.

Such collaborative buying can be done by groups of companies on an ad hoc basis as threats emerge. There are also well-established defensive acquisition networks to leverage collective resources to head off trolls. Given the huge capital resources available to NPEs, scale in purchasing power is critical for any group of companies competing to acquire high-value patent portfolios.

Today there are various flavors of patent litigation insurance. For smaller or emerging businesses that are only starting to experience regular patent assertions by trolls, insurance is an effective way to transfer a potentially high-cost risk that could be damaging or even fatal. For more established companies that are successfully managing their NPE risk with proactive tools, liability insurance adds a critical safety net by reducing exposure to risk if they face a spike in the number of patent attacks or if those attacks turn out to be unexpectedly expensive. While relatively rare, trolls have won large awards and settlements in the tens and even hundreds of millions of dollars.

NPE risk has become a fact of life for thousands of technology-based companies. Legislative and regulatory efforts have helped limit some peripheral NPE activity, but the patent troll problem is endemic and expanding. Indeed, in 2015, the total number of defendants added to NPE suits rose 22% to more than 4,100.

But the future is far less bleak than it was just a few years ago as there are now a variety of proactive ways to reduce risk. Organizations have access to data and intelligence to help successfully negotiate—and litigate—against patent attacks, and companies of all sizes and risk profiles have access to effective and affordable patent insurance solutions.

Patent risk is spreading and the potential cost of infringement litigation is still extraordinarily high. Ultimately, it is the companies at risk that will have to take steps, and take them soon, to minimize the unavoidable impact of patent troll attacks.
Paul Scola is head of RPX Insurance Services at patent risk solutions firm RPX Corporation.