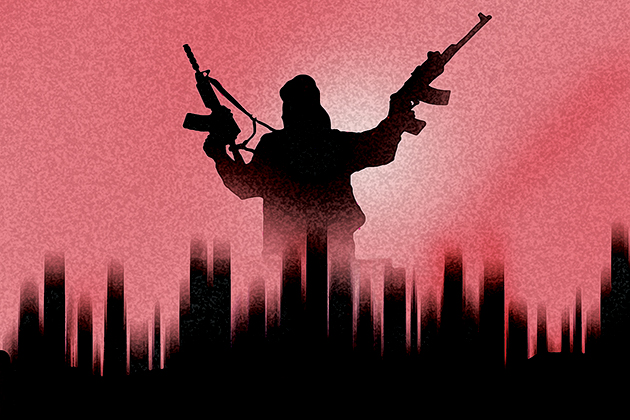 Concerns about political unrest and terrorism continue to be high on the agenda for risk managers of multinational businesses. According to the 2017 Allianz Risk Barometer, these fears ranked eighth among the top corporate perils cited by risk consultants, underwriters, senior managers and claims experts. The most commonly cited concerns were acts of terrorism and sabotage (54%), impact on supply chain (42%), protectionism or government intervention (31%), sanctions (24%) and a state crisis (23%), such as Brexit or a breakdown of the eurozone.

Supply chain impacts from terrorism can quickly become complicated, extending to a company’s internal suppliers or third parties, which could produce an interdependency and/or contingent business interruption scenario. If the insured is a manufacturer relying on a small number of suppliers or customers, for example, terrorism contingency plans should be in place as it can take months for an affected company to get back to regular operations.

While conventional terrorism is a real concern, the growing risk of political violence events, such as strikes, riots and civil commotion (SRCC) and, in extreme cases, rebellion, insurrection and war, should not be underestimated. In fact, in many countries, the likelihood and impact of these types of incidents on businesses are much greater and longer-lasting than with terrorism-related events.

There is often confusion about the difference between political risk and political violence. Political risk is the risk that an investment will suffer because of political changes or instability in a country. This could stem from a change in government, legislative bodies, foreign policy or military control. Political risks can also result in nationalization and expropriation of assets. Insurance for these scenarios can be obtained with other political risk coverages such as confiscation, expropriation, nationalization and deprivation coverage (CEND), contract frustration, or trade credit insurance.

In contrast, political violence coverage relates to events such as terrorism, SRCC, war and warlike perils (which include rebellion and coups d’état), and is often linked back to the damage to property of an insured. These types of incidents occur on a daily basis around the world and can have a significant impact on businesses and their ability to trade.

Risk managers of large U.S. companies know that safeguarding assets from domestic terrorist acts is considerably different than addressing similar risks internationally. From a domestic perspective, the greatest terrorism risk stems from incidents in which a lone wolf assailant targets people in a populated area using firearms, vehicles or a combination of both. Such attacks are increasing: According to the FBI, an average of 11.4 active shooter incidents took place in the United States annually between 2000 and 2013, 70% of which occurred in either a business or educational environment.

Active shooter insurance can help mitigate this risk, providing coverage for services both before and after an active shooter incident, including recovery from physical and emotional harm or potential loss of life. Extensions to this coverage can also provide a level of business interruption indemnity as well as protection against lawsuits that could result from allegations of negligence in failing to prevent an attack.

A more general type of domestic terrorism insurance is available through the Terrorism Risk Insurance Program Reauthorization Act (TRIPRA) of 2015. TRIPRA allows companies to obtain terrorism coverage through their property insurance for events that are of a specified type and magnitude. Once an act of terrorism has been officially certified by the secretary of the treasury, in consultation with the attorney general and secretary of homeland security, compensation under the program is then subject to a number of additional triggers, including a specific amount of insured aggregate losses during a calendar year. The program trigger is currently set at $140 million in losses and will increase by $20 million annually until it reaches $200 million in 2020. The mechanics of TRIPRA have yet to be tested, however, as none of the terrorism events that have occurred since 2001 have triggered the coverage.

For some companies, the property damage, business interruption and liability coverage provided by TRIPRA may not be sufficient or even advisable. In those cases, standalone terrorism coverage may be a better choice.

For organizations that do business in major cities designated by the Department of Homeland Security as Terror Risk Tier I or Tier II, or that are considered prime targets for terrorism and require policies beyond what government-mandated coverage provides, standalone coverage is often the better solution because these policies provide flexibility to amend coverage to fit the needs of the company instead of following the relatively rigid TRIPRA requirements. Standalone policies also allow buyers to insure international assets and to decide whether to insure the entire portfolio or particular properties that are at greater risk, resulting in direct premium savings.

Coverage extensions, such as for nuclear, chemical, biological and radiological (NCBR) threats, are also better addressed through a standalone policy. Protection may prove to be inadequate under TRIPRA as terrorism coverage follows the all-risks property contract and is dependent on multiple certification triggers. In addition, because standalone coverage is not reliant on government triggers and certifications, claims can be paid more quickly.

When evaluating the need for terrorism insurance, it helps to envision various scenarios. The direct implications and repercussions of a shooting may be fairly obvious, but the threat of violence can also have an impact. For example, after the November 2015 terrorist attacks in Paris, tourism to the city dropped considerably. At the end of 2016, tourism revenue was expected to be $1.6 billion lower than the previous year, largely due to fears of terrorism. “We haven’t recovered,” Frederic Valletoux, tourism chief for the Paris region, told Agence France-Presse at the time. “The impact is lasting and completely unprecedented... Many small businesses are on their knees.”

Thankfully, tourism has since rebounded. According to the Paris Convention and Visitors Bureau, hotel arrivals were 20.1% higher in January 2017 compared to a year earlier, and in February, international airline bookings were up by 11.1% year-over-year. Nevertheless, the declines in 2016 illustrated that companies can suffer losses stemming from the mere threat of terrorism or loss of attraction as much as from actual terrorist attacks. With the increasing number of smaller, less-sophisticated terror events, this pattern may be repeated in many other cities around the world.

The availability of new claims data and underwriters’ increased experience with this risk have enabled insureds and insurers to realize their true terrorism exposures. Traditional property damage and business interruption coverages and the types of companies buying such policies are also changing. This adjustment is driven by both risk managers and underwriters who are now approaching the negotiations with superior knowledge of the risks and a more mature approach to the coverages offered. There is a greater understanding of the impacts of an attack and/or a threat, including the effectiveness of security operations, which has allowed underwriters to better evaluate, modify and quantify the drivers for a reduction in trade.

Property damage and business interruption policies are also changing with the addition of new covers like active shooter and loss of attraction. With greater understanding of the impacts of political violence events, previously standardized sublimits and covers, such as customers and suppliers or miscellaneous unnamed locations, are being adjusted to fit client needs. 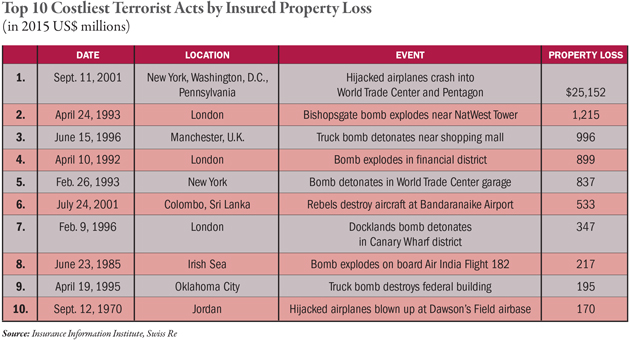 The landscape for terrorism and political violence is much different internationally, presenting more complex challenges for risk managers who oversee multinational enterprises. The world is changing and acts of violence and terrorism are now occurring in places that were considered peaceful and low-risk even a short time ago.

Depending on the countries in which a business operates, there are different concerns and insurance solutions to consider. In Europe, political dynamics—and the potential for violence—will continue to be a factor. Upcoming elections in Germany and the United Kingdom, as well as the recent Turkish referendum and French election, have the potential to further change the landscape and increase the likelihood of political violence. This was already seen in Turkey when protestors took to the streets in opposition to April’s referendum results that abolished the country’s parliamentary government in favor of a presidential system.

Outside of Europe, the threat of political violence in the form of coups d’état and civil wars is high in parts of Africa, the Middle East and, to a certain degree, Asia. Businesses that depend on these regions for customers or suppliers need to make contingencies for deteriorating or uncertain local political environments.

Ensuring that existing insurance contracts offer sufficient cover for terrorism and political violence risks is a key part of any contingency plan. The days of simply obtaining a non-admitted Lloyd’s program are over. Managing risk has become more than just managing the peril. Instead, particularly in the United States, risk managers are now recognizing the need for comprehensive international insurance programs where policies also deal with local regulatory and compliance challenges.

A comprehensive international insurance program provides a number of advantages for the insured. By obtaining a compliant local policy in all jurisdictions where a company operates, a multinational entity is better protected from any local regulatory issues that could arise. For example, potential tax liabilities can be avoided because the local payments of claims are treated as indemnity under the policies and not a source of income. This is not the case with non-admitted, centrally paid contracts.

Local policies also enable companies to access a team of local claims experts and pay premiums locally. The ability to use this expertise to deal with problems and assess losses is not only more financially efficient, but it can have huge operational advantages by allowing for quicker claim settlements and, in turn, helping the business return to normal operations faster, reducing the impact on their income.

International insurance programs also have the advantage of using local definitions of insured perils, including terrorism and political violence. This can benefit the company as the legal definitions are broader in some jurisdictions than they would be in a non-admitted policy. The master contract will also act on a difference in condition/difference in limits basis to ensure that any potential gaps in cover are patched, giving companies central control of their placement.

The good news for insurance buyers is that terrorism and political violence policies are easily accessible. In the face of this new political climate, risk managers need to take advantage of the opportunity to protect their businesses before an unforeseen incident can occur.
Christof Bentele is the head of global crisis management with Allianz Global Corporate & Specialty.