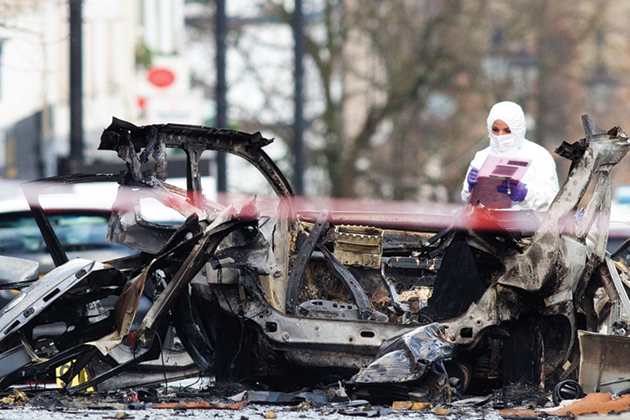 The United Kingdom voted to leave the European Union three years ago, and the ensuing governmental wrangling continues to mire the country in political and economic uncertainty. This includes on the border of Ireland and Northern Ireland, where a group calling itself the New IRA claimed multiple attacks this year: setting off a car bomb in Northern Ireland in January, sending parcel explosives to multiple sites in London and Glasgow in March, and killing journalist Lyra McKeen during riots and a shootout with police in Northern Ireland in April. Thus far, however, the recent burst of tragic violence in Northern Ireland seems unlikely to be the beginning of a new era of large-scale terrorist violence and reprisals across the islands.

One of the biggest unknowns about Brexit is what will happen to the currently-open border between the United Kingdom and Ireland. Because Ireland is an EU member, its border with Northern Ireland (which is part of the UK) is open, helping to soothe regional tensions. But if the UK and the EU cannot arrive at a deal, or if Ireland and the UK cannot negotiate their own deal (called a “backstop”), it will become a hard border, possibly reigniting simmering regional animosities. According to Dr. Aaron Edwards, senior lecturer in defense and international affairs at the Royal Military Academy Sandhurst, “Although it remains to be seen whether this will come to pass, there can be no doubt that the continued absence of a deal—as well as functioning power-sharing government in Belfast—provides the context within which instability continues to thrive.”

Flareups of violence in Northern Ireland are relatively common, especially in certain locations or coinciding with important historical dates, “whether the Brexit negotiations are taking place or not,” said Erika Weisbrod, director of security solutions at International SOS and Control Risks. It also does not necessarily change the calculus for employees’ travel risk when traveling to the UK. Brexit “doesn’t really change the risk environment,” she said, predicting its true impact for travelers to the UK will likely be mostly “administrative inconvenience,” including market and immigration changes.

Evaluating the travel risk for terrorism depends heavily on local authorities’ capacity to confront those threats, Weisbrod explained, and the UK’s security and intelligence capability can effectively confront and prevent terrorism, decreasing the risk significantly. But, she cautioned, traveling employees and their employers should not rule out the danger of terrorism, and still need to prepare to protect themselves.

Terrorism incidents are relatively infrequent compared to the other dangers that travelers face, such as illnesses or weather events. The odds of dying in a terrorist attack are 1 in 9.3 million, while the odds of getting sick while traveling is 1 in 2. However, risk managers must still take these incidents seriously and factor them into pre-trip mitigation planning and training, even for traditionally low-risk destinations like the UK.

Terrorists often attack densely populated areas to cause more casualties and interrupt normal daily life (and economic activity). Ideologically-motivated violent actors may also target travelers with certain characteristics, such as ethnicity, gender, sexual identity, country of origin, or easily identified political beliefs or economic standing. Some groups are uninterested in civilian casualties and have even been known to send notice to clear an area before a bomb goes off, while still seeking to draw attention or sympathy to their cause. In these cases, authorities may shut down buildings or entire neighborhoods, block traffic or stop trains or planes to deal with a threat. This type of disruption can even occur in response to minor incidents outside of any terrorist campaign, like someone reporting a suspicious package. Subsequently, traveling employees may have their business plans interrupted or cancelled, which can further impact employer costs.

Before traveling, employers and employees should educate themselves thoroughly about any possible threats and plan accordingly. Have there been any recent events that increase the chances of an incident, or have any violent groups made any specific threats regarding the destination? Does the trip coincide with important or contentious holidays or historical dates, political demonstrations or elections? In these situations, Weisbrod said, travelers can take extra precautions, including having set travel plans and even mapping out routes to avoid certain areas.

Companies have a legal obligation, known as a “duty of care,” to prepare employees and address potential risks they may face while traveling. “Your company can do training, either specific to your destination or, more generally, the types of best practices considerations for your trip, and communicating the resources and what to do when things go wrong,” Weisbrod said. Companies can set up systems for tracking and contacting employees in a crisis, make sure employees know how to contact the company’s travel point-person or home-country embassy if an incident happens, and even what the local 911 equivalent is and its reliability. Having clear plans in place for in-country medical care or evacuation can also ensure that employees remain safe and receive assistance promptly.

Companies can mitigate some of the risk with various insurance options to cover their traveling employees, including foreign voluntary workers compensation, business travel accidental death and dismemberment coverage, kidnap and ransom coverage, expatriate medical and defense base act coverage for government contractors working at military bases and embassies overseas.

Pre-trip preparation and planning can pay high dividends for companies. Not only could it prevent injury or death, but according to international risk intelligence firm WorldAware, the average cost of a medical evacuation for an employee traveling abroad is $25,000 to $30,000. In terms of lost business costs, the Global Business Traveler Association has projected that a three-day international business trip may average more than $4,000. If circumstances prevent meetings or other business from taking place, this money could essentially be wasted.

Employees face a variety of dangers when traveling, even in regions that could be considered relatively low-risk. However, if employers and employees adequately prepare, they can mitigate many of these risks, protect themselves and ensure their business plans can continue without interruption. “If you have that in your mind before you go,” Weisbrod said, “then when something does happen, even if the likelihood is very low, you will respond better.”

Managing the New Dynamics of Terrorism