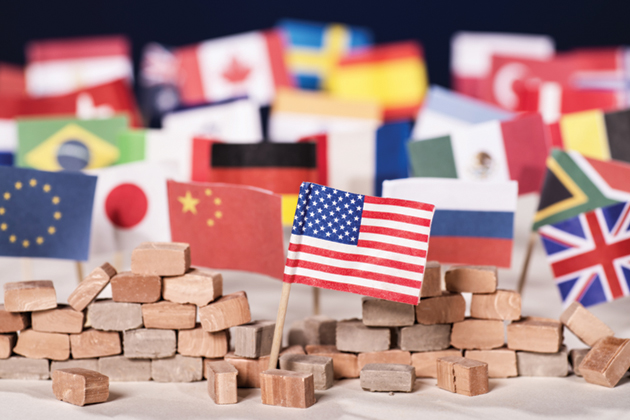 While less often discussed than other forms of risk, political risk is a real and prominent concern plaguing executives of large corporations, and can pose a real threat to small and mid-sized companies.

The World Economic Forum’s Global Risks Report 2019 ranks rising geopolitical and geo-economic tensions as the most urgent risk this year. Chief financial officers’ top worries appear to reflect this, shifting toward political threats with particular concern over trade policy, according to Deloitte’s fourth-quarter 2018 North American CFO Signal survey. Among 147 CFOs from some of the most influential companies, two-thirds expect the United States to impose new trade restrictions on China, while only 8% expect U.S.-China policy to become more favorable. Indeed, 40% of CFOs expect tariffs to substantially increase their input prices, and only 6% expect them to elevate demand for their offerings.

Recently, President Donald Trump threatened to close the border between the United States and Mexico, which would clearly have significant ramifications for many businesses. Some may need to ship their goods to Canada to bring them into the United States, for example, which would drive up the cost of components or finished goods. Some U.S. businesses that sell products in Mexico might have their market closed entirely—at least temporarily—as the Mexican government would certainly be expected to respond with restrictions on U.S. goods.

Historically, political policies can often have significant intended or unintended ramifications for businesses. The Affordable Care Act’s biggest backers said the law would help small businesses, for example. But the many requirements and new taxes and fees to help pay for various parts of the law created compliance burdens for many, ultimately hurting some businesses instead of helping them.

In the realm of environmental regulations, the U.S. Environmental Protection Agency and the Department of Transportation’s National Highway Traffic Safety Administration finalized new fuel-efficiency standards for medium and heavy-duty vehicles, such as semi-trailer trucks, large pickup trucks and vans. But depending on the size of the vehicle, these could add as much as $15,000 to the price. Truck manufacturers that could not meet the new standards had to pay fines, forcing some companies out of business.

Regarding international trade policies, the Trump administration’s announcement of a series of tariffs on trading partners—including close U.S. allies—led to a succession of retaliatory measures targeting U.S. exports. Tariffs have a huge effect, often impacting businesses and industries that were not directly targeted. This causes a strain on supply chains and raw material costs as well as the ability to trade across borders.

Companies can certainly try to minimize the impact of political risk through diversification and well-laid contingency plans. However, a less obvious but potentially powerful approach is to insure against political risk.

When thinking about political risk insurance and possible exclusions, business owners, CEOs, CFOs and risk managers should assess the threat of the following risks and determine whether or not coverage is needed:


It is important to ensure that insurance coverage will come through if any of these situations occur. This is precisely why captive insurance may be a strong alternative for some companies seeking to protect themselves from political risk.

A captive is simply a choice to own all or part of an insurance company. Captives are licensed insurance companies and are often able to write broader insurance policies than standard commercial policies. With unusual threats like political risk, broader coverage with fewer exclusions is key to actually getting claims paid.

Often, the business interruption and lost revenue from a political event cause the most damage. Because captives are licensed insurance companies, they can access commercial reinsurance or reinsurance risk pools, enabling them to spread the impact of potential political risk losses.

Captives can also receive insurance premiums and set them aside as loss reserves. Loss reserves require actuarial calculation and approval. Captives have the benefit of deferring taxation on loss reserves, enabling them to invest and grow a large pool of funds for the unexpected.

The nature of political risk and the complexities surrounding it often require finding solutions beyond mitigation and diversification. Commercial insurance policies may be available to help transfer some of the risk, but it is important to consider the potential trade-offs of sunk costs, narrow scope of coverage and potential policy exclusions, and to assess whether captive insurance may provide a more holistic approach.
Randy Sadler is a principal with CIC Services, LLC, where he consults directly with business owners, CEOs and CFOs in the formation of captive insurance programs.