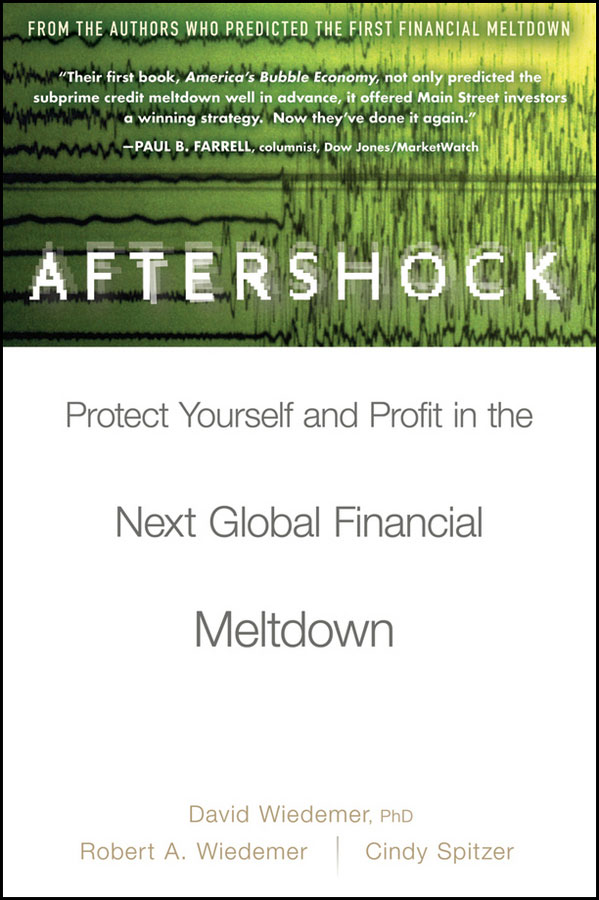 Back in 2006, David Wiedemer, Robert Wiedemer and Cindy Spitzer were among the few analysts to correctly predict the collapse of the housing market and the resulting financial crisis in their book America's Bubble Economy. It was a commendable bit of foresight and certainly deserving of recognition. And in their latest book, the authors have no intention of letting us forget it.

First, however, let's give credit where credit is due. Aftershock is a compelling book that makes a strong, logical argument that America's financial future is going to worsen before it gets better. The authors contend that U.S. prosperity in recent years has been based on wealth created by an economy made up of multiple bubbles. These bubbles have been inflated not by tangible productivity improvements but by rampant financial speculation and the assumption that certain assets will always increase in value.

The first four of these bubbles - real estate, stock market, private debt and discretionary spending - have already popped, creating our current predicament. The authors predict that the next two bubbles - the dollar and government debt - will be the next to go in what they refer to as a "bubblequake," leading to an "aftershock" of double-digit unemployment, inflation and interest rates and fostering a dramatic shift in American life as we know it. What happens next will seem for many like economic Armageddon. The authors are more hopeful, however, characterizing this new era as a painful but necessary economic evolution that will hopefully lead to a more stable financial future.

To its credit, Aftershock does not come off like the work of a trio of crackpot Chicken Littles. Rather than engage in unrealistic economic cheerleading, the authors describe a very plausible, albeit frightening, scenario. The book is marred, however, by their insistence on constantly patting themselves on the back for the success of their previous predictions. While a victory lap may be justified, taking the entire book to do it is a little excessive. Throughout the book, the authors refer to their "unmatched track record" as justification for why the reader should heed their advice. Essentially, they continually sell the book to the end, forgetting that the reader has already bought it.

After a while, these frequent self-aggrandizing asides start sounding desperate and begin to border on the delusional. The authors devote an entire chapter near the end to debunking what they think will be criticism of the book even though these arguments, at least for the moment, only exist in their heads. They even go so far as to equate Aftershock to classic works like Uncle Tom's Cabin and Silent Spring for its willingness to expose unpopular issues and challenge the status quo.

Unfortunately, all this hyperbole only serves to undermine the authors' message by making it seem like even they do not have enough confidence in what they are saying to allow it to stand on its own merit. Either that or they really do think that highly of themselves. It is a shame because otherwise, Aftershock is a good read that delves into some vitally important topics.

What the authors fail to realize is that while it is perfectly acceptable to be the smartest person in the room, constantly telling everyone that you are a genius only tends to annoy and alienate the very people you are trying to impress. It is hard to respect the message when you are constantly reminded that maybe you should be questioning the messenger.