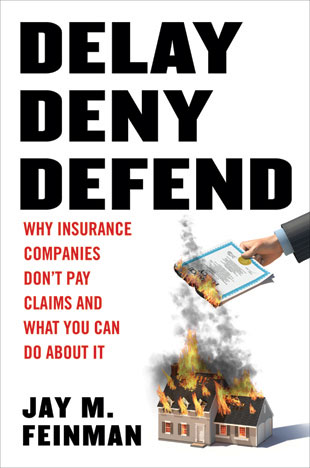 The basic goal of insurance has always been to provide policyholders with the security that unforeseen losses will not drive them to financial ruin. Insurers promise that if you buy their product, they will cover you if something goes wrong. But increasingly, policyholders have discovered that getting a claim paid can be an arduous task as insurance companies do everything they can to avoid their obligations. Essentially, insurers have broken the core promise that justifies the very existence of their product.

The motivation for this behavior can be summed up in one word: profit. These days, insurance companies are more interested in serving their shareholders than their policyholders. And the easiest way to increase the bottom line is to reduce the losses that come from paying claims. So they delay to take advantage of float (the lag time between taking in premiums and paying out claims) and maximize their earnings on invested premiums. Or they just deny any responsibility to pay at all and then defend their refusal-in court if necessary-in the hopes that the policyholder will give up when they exhaust their resources or the will to fight.

This may not be a revelation to most of us, but Delay, Deny, Defend is more than just a statement of the obvious. It is also a fascinating look at how we got here and what we can do to protect ourselves. As the author deftly explains, the shift in focus from customer service to the bottom line was no accident but rather a systemic change in the way insurance companies do business borne out of the desperation of a 12-year soft market in the 1990s, a relaxed regulatory environment and the influence of consultants who demonstrated to the insurance industry that claims could become a profit center. And it is going to take consumer awareness, government involvement and harsher penalties if there is any hope in fixing what many believe to be a broken system. Only by ending the system of delay, deny and defend can insurers regain the confidence of the people they claim to serve.