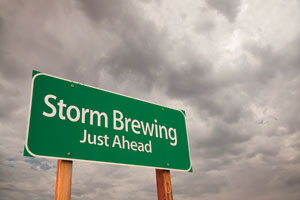 The dual catastrophes in Japan have forced the issue of disaster preparedness and catastrophe insurance to the foreground. In the aftermath of such large-scale destruction, many are asking insurance questions, and those regarding earthquake and flood coverage in the United States come with tough answers.

A 2010 poll by the Insurance Information Institute (III) found that only 10% of Americans had a flood insurance policy, down from 13% in 2009 and 17% in 2008. The poll also states that although the percentage of residents with flood insurance was highest in the southern United States (14%), even that region had dropped from 19% in 2009.

Other areas of the country have even lower coverage rates. "Nine percent of people in the Northeast and the West had a flood insurance policy in 2010 and 6% in the Midwest," states the report. "A separate poll showed that 37% of Louisiana residents and 14% of Mississippi residents, those most affected by Hurricane Katrina in 2005, had flood insurance policies."

As far as earthquakes go, the report stresses concern over increased urban development in seismic zones and the fact that older structures in some cities may not have been updated to meet current building codes. Though the United States has not experienced a significant earthquake on its mainland since the 1994 Northridge quake in California, there has been continuous seismic activity before and since.

In fact, the report states that since 1900, earthquakes have occurred in 39 states and caused damage in all 50, the most recent of which occurred in Arkansas earlier this year. And tsunamis, though rare for the United States, should be expected and prepared for with flood insurance through the National Flood Insurance Program.

"Everyone, no matter where they live, should contact their agent or company representative to make sure that they have the right type and amount of insurance for their specific situation," said Jeanne M. Salvatore, senior vice president of public affairs and consumer spokesperson for the III. "All Americans also need to have an up-to-date home inventory of their personal possessions and an evacuation plan, as well as take reasonable steps to protect their homes and businesses from any disasters that pose a risk to their personal safety and property."

As Japan's insured losses climb towards record-setting denominations, U.S. citizens are well-advised to review their current insurance policies and make adjustments.
Emily Holbrook is the founder of Red Label Writing, LLC, a writing, editing and content strategy firm catering to insurance and risk management businesses and publications, and a former editor of Risk Management.