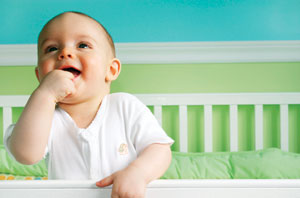 First it was lead in paint, then it was BPA in plastic products and now there are fears of yet another chemical compound's adverse effects on health, especially the health of children. Scientists from California and North Carolina conducted tests on foam samples collected from 101 commonly used baby products and found that 80% of cushions used in car seats, portable cribs and other baby furnishings contain chemical flame retardants that can accumulate in babies' bodies and possibly lead to severe health and developmental defects.

Even more shocking, the researchers found "tris," a chemical that was banned from being used in children's sleepwear 40 years ago, in more than one-third of the tested products. Scientists have concluded that chlorinated tris mutates DNA and may be carcinogenic. Interestingly enough, tris became more commonplace after industry began using it to replace "penta," a furniture flame retardant banned in 2004 due to its link to lower IQ scores of toddlers and preschoolers in the New York City area.

"Are we moving from one compound for which there is a concern to a newer compound that may be just as bad or worse?" stated Linda Birnbaum, director of the National Institute of Environmental Health, in Scientific American. "There are a few [of these compounds] that we certainly have concerns about."

A handful of the flame retardant chemicals have been banned for use in products in a few states, such as Vermont and California. Testing continues on the chemicals and a search is underway for safer alternatives that manufacturers can use in their place.
Emily Holbrook is the founder of Red Label Writing, LLC, a writing, editing and content strategy firm catering to insurance and risk management businesses and publications, and a former editor of Risk Management.