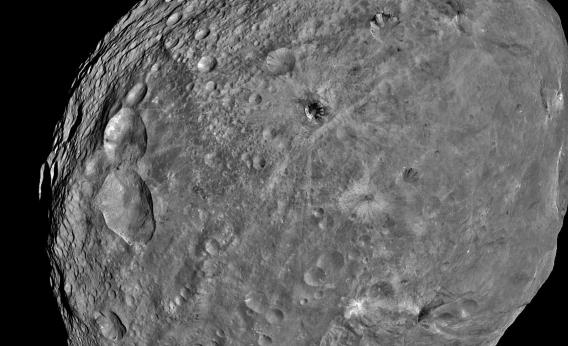 Of all the risks that face our planet, the possibility of an asteroid colliding with the Earth and sending humanity the way of the dinosaur may be the most cataclysmic and least preventable. Sure, we may have the cast of the movie Armageddon, but if a large space rock chooses to head our way there really isn't much we can do about it, regardless of Bruce Willis' formidable skill set.

So it's a good thing that NASA recently discovered that the risk may not be as great as we thought. According to data from the agency's Wide-field Infrared Survey Explorer (WISE) telescope, there are "only" about 20,500 mid- to large-size asteroids within a 120 million mile orbit of the Earth (a distance astronomers call "near-Earth"). This is down more than 40% from previous estimates of 36,000, which had been based on the findings of less-accurate visible light telescopes. NASA scientists have also located all but 70 of the 981 largest near-Earth asteroids, which, at 3,300-feet wide and larger, are the ones most likely to destroy the planet in a collision. Thankfully none of these are expected to pose a threat for centuries, which should give scientists plenty of time to consider what one would assume is the next logical step-figuring out how to stop them.

However, at a recent California Institute of Technology workshop, a group of scientists and engineers had a much crazier idea. Rather than focusing their efforts on preventing an asteroid strike, they spent four days discussing ways to pluck one from space and bring it back to Earth's orbit. The thinking is that an asteroid could provide a valuable, and less expensive, jump-off point for future space exploration since breaking out of an asteroid's weaker gravitational field would take less fuel and power. Scientists and engineers could also set up research bases and even mining operations, which could be extremely lucrative considering some of these space rocks are basically just mile-wide chunks of metals in concentrations that have been estimated to be worth trillions of dollars.

Of course, if something goes wrong with our space-lasso project and we tug a little too hard, we get squashed. It doesn't seem like there is very much room for error. Besides, our recent track record of keeping things in orbit has been a little suspect. In September, after widespread media attention that there was a 1-in-3,200 chance that it could cause injury or damage, NASA's six-ton Upper Atmosphere Research Satellite (UARS) crashed to Earth in the Pacific Ocean. This was the largest uncontrolled satellite re-entry since the 75-ton Skylab crashed to Earth in 1979. And as of this writing, a 5,000-pound German X-ray telescope was expected to hit the planet around the first of November. Researchers gave this satellite a 1-in-2,000 chance of causing injury. Obviously we have plenty of falling space junk to worry about already.

On top of this, researchers are speculating that with the thousands of tons of space debris already orbiting the Earth and the cyclical increase in solar activity during the next few years, we could start seeing a higher rate of dangerous satellite re-entries. Increased solar activity causes the upper atmosphere to expand and creates drag on lower orbiting satellites and other objects, which pulls them down quicker. This was why the UARS fell faster than scientists initially expected. Now, many of those objects will burn up in the atmosphere-it was expected that only 1,100 pounds of UARS material would survive its re-entry-but that's plenty if any of those fragments land on your house. Or worse, your head.

Despite the fact that grabbing asteroids out of space sounds like a mad scientist's scheme in a bad movie and comes with, well, planet-sized risks, I like the idea. Anything that increases the chances that I'll get to live out the Star Wars dreams of my youth in some distant solar system will always get my approval. I just hope they come up with a good backup plan because it's not like insurance is going to be able to cover it.