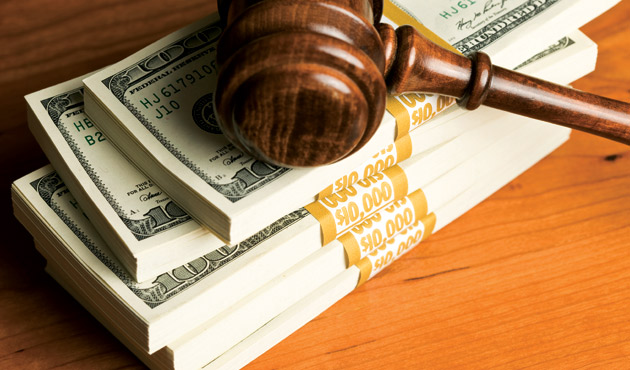 The Securities and Exchange Commission and the Federal Reserve began slapping fines on major banks soon after the 2008 economic crisis. Three years later, banks are finally agreeing to pay the fines while regulators continue to dole out new ones -- most stemming from actions related to toxic securities, namely collateralized debt obligations. These fines may look big on paper, but in reality they represent a small fraction of any major bank's assets.

For violations ranging from shady accounting practices and predatory lending to preferential client treatment and betting against the very financial advice they gave customers, the big banks have all had to pay a price. Whether or not the punishments will serve as a lesson remains to be seen, but those on Wall Street learned this year that their actions have consequences.

June 10
Wall Street powerhouse Goldman Sachs has seen its share of fines. In July 2010, it was hit with a $550 million penalty from the SEC, the largest ever handed out by the regulator. One year later, the firm was hit with a $10 million fine after a two-year investigation by Massachusetts? chief securities regulator. The probe focused on Goldman's "Asymmetric Service Initiative," in which analyst information was given to favored clients first. The settlement found that Goldman "engaged in dishonorable or dishonest conduct," but also noted that the agreement to pay was not an admission of fraud.

June 21
A lawsuit against JPMorgan Chase, which has more than $2 trillion in total assets, claimed that the bank structured and marketed collateralized debt obligations (CDOs) without informing investors that the underlying subprime assets in the portfolio were selected in part by a hedge fund that was positioned to profit if the portfolio failed. JPMorgan promised that the underlying mortgage assets would be selected by an independent manager -- but Magnetar Capital LLC was found to be far from that. During the housing bubble collapse, the 2007 deal, named Squared CDO 2007-1, wiped out nearly all investments, leaving the likes of GM and major banks in Asia out millions. On June 21, the bank finally agreed to pay the $153.6 million SEC fine.

July 20
Wells Fargo, the nation?s fourth largest bank, was accused of pushing borrowers with good credit into expensive mortgages and falsifying loan applications. The loans in question were made from 2004 to 2008 and involved an estimated 10,000 borrowers. In response, the Federal Reserve announced a record $85 million fine, the largest it has issued under its new consumer protection authority. The penalty was also the first action taken against a bank for predatory lending practices related to the housing bubble collapse.

September 11
In 1998, Brightpoint, Inc., a distributor of wireless devices, found itself with a charge of as much as $18 million on its books, which eventually rose to $29 million. In a panic, Brightpoint turned to AIG to reclassify the money as being for insurance purposes -- a shady accounting move that allowed Brightpoint to spread out over several years a loss that should have been recognized immediately. On September 11, the company agreed to pay a $10 million fine to settle SEC charges of dishonest accounting.

September 14
Bank of America was fined $930,000 and ordered to reinstate a Los Angeles-based employee after the U.S. Department of Labor found that the nation's largest bank had violated the whistleblower protection provisions of the Sarbanes-Oxley Act. The individual involved in the suit was employed by mortgage lender Countrywide Financial before it was acquired by Bank of America in 2008. During his time at Countrywide, he was in charge of an internal investigation that revealed widespread wire, mail and bank fraud involving Countrywide employees. Soon after the acquisition, the employee was fired. As of early November, Bank of America is challenging the order.

September 27
The Royal Bank of Canada (RBC) agreed to pay $30.4 million ($31 million Canadian) to settle charges stemming from the 2008 financial crisis. The SEC charged that the capital markets division of Canada's largest bank sold "unsuitable" investments -- $200 million worth of collateralized debt obligations -- to five Wisconsin school districts. The SEC argued that RBC never fully informed the school districts of the immense risk involved in such complex investments. RBC agreed to pay the school districts back in full, though it has not admitted nor denied allegations.

October 19
Similar to the charges against RBC and JPMorgan, Citigroup was faced with civil action brought against it by the SEC for selling securities backed by mortgages that it simultaneously bet against. According to the SEC, one Citi trader email characterized the investment as "dogshit" and "possibly the best short ever." Within months, the CDO defaulted, taking millions from investors while Citigroup made $160 million in fees and trading profits. On October 19, the bank agreed to pay the $285 million fine stemming from these actions. Credit Suisse, the collateral manager, was also slapped with a $2.5 million fine for allowing Citi to influence the portfolio.
Emily Holbrook is the founder of Red Label Writing, LLC, a writing, editing and content strategy firm catering to insurance and risk management businesses and publications, and a former editor of Risk Management.